All indications and scientific findings of climate change research point to the ever-increasing emission of carbon dioxide (CO2) into the earth’s atmosphere. Time and again, scientists have pointed out that this will increase temperatures in the earth’s atmosphere with devastating effects in the coming decades.

With vast conviction among world scientists of the gravity of the situation, it would be no surprise that the emergence of a study suggesting otherwise is bound to raise eyebrows.

A paper published in the Geophysical Research Letters on November 7, 2009, states that the earth has developed stores to absorb excess CO2 in the environment.

The author of this study, Wolfgang Knorr, argues that CO2 levels have remained slightly above 50 percent despite this increased emission over the years.

Dr. Philip Boyd of the Centre for Chemical and Physical Oceanography jointly operated by the University of Otago, New Zealand, told Aboutislam.net that the planet will continue to absorb significant amounts of CO2. “But there will be many complex feedbacks that will result from climate change,” he continued.

Zanna Chase, an oceanographer at Oregon State University, explained that it is very important that we understand the potential feedback mechanisms that climate change has on the ability of the earth to remove human-emitted CO2 from the atmosphere.

“Most research suggests there will be a decrease in the ability of the earth to absorb human-emitted CO2 as the planet warms. This will accelerate the rate of increase of CO2 in the atmosphere, as more of what humans emit ends up in the atmosphere,” Chase told Aboutislam.

However, she cautions that there are a lot of uncertainties in these predictions. The fact that this study finds no change in the relative proportion of CO2 emissions ending up in the atmosphere over recent decades “does not mean that we don’t need to worry about this positive feedback mechanism,” she warns.

Previous studies have shown that the increase of CO2 emissions in the atmosphere has made it difficult for the earth to quickly absorb extra emissions. Studies have also shown that the soil and oceans have become saturated, thus unable to absorb any more CO2.

Chase explains that it is difficult to account for where CO2 has gone. She adds that it is challenging to detect small changes in where emissions have ended up, be it on land, ocean, or atmosphere. She maintains that the warming of the earth experienced so far is relatively small: “Just because we see no evidence for a positive feedback over recent decades doesn’t mean it won’t kick in as temperatures increase further.”

Knorr’s study is not the only one that seems to be at odds with conventionally held scientific opinion about the warming of the earth. Another study released in November 2009 has negated the previous estimates of CO2 emissions into the earth’s atmosphere, blamed on the felling of trees.

A research carried out by G.R. van der Werf and others at the Faculty of Earth and Life Sciences, VU University Amsterdam, has shown that emissions resulting from deforestation could be as low as 12 percent rather than the 20 percent figure quoted in previous studies.

They Feed on Climate Change 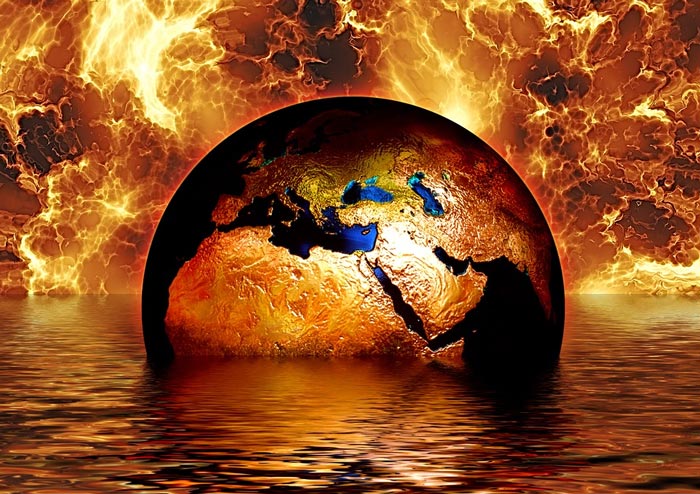 These new findings indicate as well that marine plants are adapting to climate change by absorbing carbon from the atmosphere as the ice melts. The British Antarctic Survey (BAS) for one suggests that phytoplanktons are flourishing in water from melting ice and glaciers.

Boyd explains that as marine plants take up more CO2, the melting of ice also enhances the absorption of solar radiation by the oceans, as less light is reflected by their diminishing surfaces.

Boyd believes there are complex links between CO2, solar radiation, and oceans, “so the bottom line is that we shouldn’t take any one study as the whole story. It is a complex system in which many disparate elements are tightly interlinked.”

Chase also agrees with this observation: “Carbon accounting is complex, and scientists are bound to revise estimates of where the carbon is coming from and where it is going.”

These studies, according to Chase, do not in any way change the basic fact that CO2in the atmosphere is increasing due to human activities such as burning fossil fuels and deforestation.

She points out that these estimates are critical components in predicting the future levels of CO2, and that estimating exactly how much CO2 will be in the atmosphere in 100 years, and thus how much warming will occur, is very difficult.