The ever-growing human population worldwide continues to exert lots of pressure on the availability and accessibility of the most basic commodity on planet Earth necessary for the support life.

This has meant that the urgency to devise technology-driven solutions, away from the traditional sources of accessing water, has never been so imperative.

Besides coming under constant threat of pollution attributed to human activity, traditional ground water sources such as lakes, rivers and reservoirs are proving inadequate. Attention is increasingly shifting toward other possible solutions to the problem of water.

One method seen by scientists as a viable answer to supplementing the dwindling water supplies is enhancing precipitation through cloud seeding technology. The technology has continued to gain prominence over the years, from the time when it was first initiated seven decades ago. 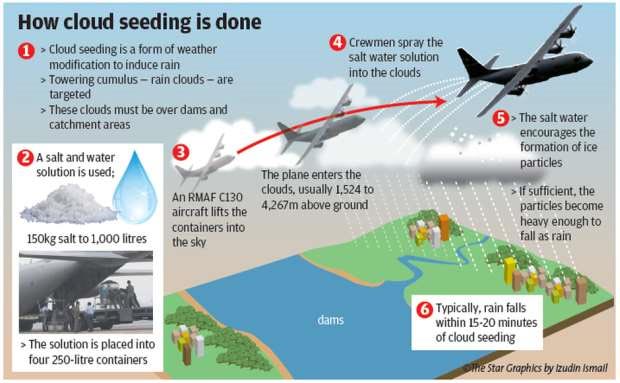 Cloud seeding is a weather modification procedure based on the principle that super-cooled liquid water could be converted to ice crystals using either dry ice or silver iodide. Both silver iodide and dry ice enhance ice crystals concentrations in the clouds by either forming new crystals or freezing cloud droplets.

In order for clouds to be formed, warm air from the earth rises and begins to cool to form tiny droplets of water. The water droplets condense round dust, salt or soil particles known as cloud condensation nuclei in the atmosphere into tiny cloud droplets.

These cloud droplets group together to form clouds. When they become heavy these clouds fall down as rain. Cloud seeding only serves to speed up this process.

Roelof Bruintjes, the principal scientist of weather modification programs at the National Centre for Atmospheric Research (NCAR) in Colorado, the United States, tells Aboutislam that cloud seeding is very competitive compared to other water technologies in terms of cost.

He explains that the technology is competitive in comparison to desalination, reservoir building among other technology-oriented solutions to the problem of water.

“The cost per cubic meter of water is less than alternatives. A project can cost anywhere for a season from a few hundred thousand dollars to a few millions,” Bruintjes told Aboutislam.

The question of accessing water, not just for drinking but for other purposes such as irrigation has been and continues to be a major challenge facing developing nations.

Given the fact that the economies of these countries largely depend on agriculture, the dire need for water as a critical driver of the economy cannot be over-emphasized.

And as such the question then becomes whether or not such developing countries possess the required capacity to apply cloud seeding technology to meet their various water needs.

Bruintjes explains that this depends on the country’s need for water. He adds that cloud seeding projects are currently ongoing is such countries as Mali, Senegal, Burkina Faso as well as Libya and Morocco.

Cloud seeding technology may sound like a high-flown, complicated idea that is out of reach for the third world. To a lay person it may appear very difficult to spread substances on clouds.

On the contrary, Bruintjes explains that it is very easy to spread ice crystals or silver iodide into the clouds.

He maintains that this is achieved by means of an aircraft laden with flares or generators that are installed on the aircraft. As far as he is concerned the technology is no more complicated than alternative technologies.

“It depends on the type of clouds. In some clouds seeding will not work while in others it may work very well,” says Bruintjes.

In order to apply the technology, a country needs to have a basic infrastructure with aircraft and weather radars. More than fifty countries are now applying the technology.

By developing their own technology, scientists in India are seeking to understand the reasons behind why certain types of clouds produce raindrops different in size to those from other clouds. In addition, the scientists are looking to establish the reasons why some clouds yield more rain than others.

“Some clouds are efficient in giving rain while others don’t give that much. In the latter type of clouds, transformation of water vapor to rain doesn’t occur. The transformation requires cloud droplets to grow bigger in size to form drizzle and rain,” Dr. Jivan Kulkarni, one of the Indian researchers told the Daily Telegraph.

And just to underscore the growing significance of this technology, a new research program is set to begin in the United Arab Emirates (UAE) soon. Under the auspices of NCAR and the National Center for Meteorology and Seismology, scientists say the program could provide a whole new perspective on cloud seeding in the coming years.

NCAR’s Bruintjes tells IOL that this project will take a new look at all the principles of the technology. He explains that ground water tables have been steadily declining around the world.

“To help alleviate some of these stresses, cloud seeding for precipitation enhancement has been used as a tool to help mitigate dwindling water resources,” explains Bruintjes.

It is interesting to note that the technology is not an exclusive fascination for countries in the driest regions of the world. Other countries are also becoming more and more interested.

Countries such as Indonesia, Thailand, Malaysia and India are investing in this weather modification technology as well. And this despite the fact that they receive fair amounts of rainfall, but lack the technology to retain this water.

Other countries such as South Africa, the Zionist entity and Argentina have initiated cloud seeding program as well.

Of all the countries that are conducting weather modification projects, China is the most ambitious. The country has invested more than US$ 40 million in this area. (National Research Council)

It is true that cloud seeding technology may be an answer to solving the water availability and accessibility challenges facing the world today. But this does not in any way suggest that the technology is immune to setbacks.

Bruintjes explains that the complex nature and process of developing clouds and precipitation has been one of the challenges facing the technology.

Whereas many in the scientific fraternity remain upbeat on the prospects presented by cloud seeding, others are not quite so convinced.

They point to the fact that the science behind the technology is very much under the microscope, and as such a lot still need to be understood.

This is a major worry, viewed by some as a big drawback. Concerns now abound about rogue scientists in this area of weather modification promoting only some aspects of cloud seeding, which have not been subjected to foolproof scientific tests. (Davies)

Ionization is one technique, where charged particles are said to act as nuclei for raindrops. This method has not been scientifically proven.

And now developing countries are being discouraged from applying the technology. The argument being advanced for this measure is that these countries are particularly at risk from unscrupulous scientists.