For a long time, the human brain was considered a mystery concealed in a box. It was, and still is, extremely difficult to diagnose what is going on inside. But thanks to advancements in new imaging techniques, we now have the opportunity to see the brain in action and so better diagnose and treat it.

Brain cells don’t regrow or regenerate as other human cells. For instance, if someone has a liver disease, cells may regrow and compensate for those damaged ones. This doesn’t happen with brain cells, however, and whenever there is damage, it is an irreversible one. This adds to the burden of brain diseases.

The discovery of the potential use of stem cells in repairing damaged and diseased cells offers a revolution in treatment tactics, especially for those known as irreversible diseases.

What are Stem Cells?

Stem cells are the mother cells for all the cells in our bodies. They can self-renew to produce more stem cells or more specialized cells. They can grow to become bone cells, muscle cells, eye cells, skin cells, or any other type of cell in the body. They have the ability to repair damaged cells too.

They are different from other cells by two significant characteristics. First, they are capable of renewing themselves even after being inactive for long periods of time. Second, they can be provoked under certain conditions to become tissue- or organ-specific cells with particular tasks.

There are two main types of stem cells: embryonic and adult stem cells. Embryonic stem cells were first discovered when embryos were created through in vitrofertilization procedures and were no longer needed, and donated for research after informed consent of the donor.

Adult stem cells are present in grown up bodies and can reproduce daily to provide certain specialized cells. Adult stem cells were discovered in 2006 when researchers genetically reprogrammed some adult cells to stem cell-like model.

There are three possible sources of stem cells to use for transplants: bone marrow, the bloodstream, and umbilical cord blood from newborns.

It’s easier for both doctors and the donor to produce more stem cells from peripheral blood than from bone marrow. But the risk of graft-versus-host disease is somewhat higher with peripheral blood stem cell transplants than with bone marrow transplants. On the other hand, umbilical cord blood usually raises ethical and moral concerns.

After having the stem cells from the mentioned sources, researchers grow them in the lab. These stem cells are operated upon to make them specialize into specific types of cells. This manipulation may involve changing the material in which the stem cells are grown, or injecting genes into the cells. Then the new specialized cells can be implanted into a person. 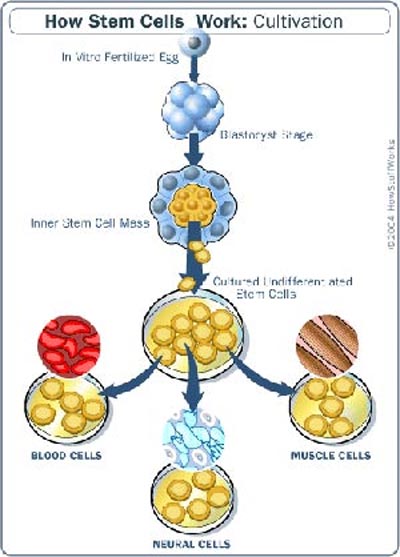 Interest is growing in creating stem cell banks either from the umbilical cord of newborns to be used for these babies later on if needed, or directly from adults themselves

Many common neurological disorders, such as Parkinson’s disease, stroke and Multiple Sclerosis, are caused by a loss of neurons and non-neural glial cells.

Recently, neurons and glia have been generated successfully from stem cells in lab culture. This is based on the idea that through transplantation of stem cells, we can replace damaged cells and restore brain haemostasis.

In recent researches, it was found that both embryonic and adult stem cells have the ability to produce neurons and other types of nervous system cells. The first application of this was done on patients with spinal cord injury. They suffered from weakness of limbs which would have led to complete paralysis.

After transplantation of stem cells, spinal cord damage was repaired and patients were able to walk again.

Furthermore, stem cells are currently being experimented with for use in treating Multiple Sclerosis, which is a disabling disease that usually affects young adults. If approved, it will carry great and marvelous hope for those patients as this disease spoils the most energetic period of life.

It is also being tried in the treatment of muscle diseases, Alzheimer and other neurodegenerative diseases.

In such diseases, the used stem cells repair and renew muscle fibres in muscle disease, replace dead brain cells after occlusion of blood vessel as with stroke, or regenerate brain cells and neurons in other degenerative diseases.

They showed promise in the results of these trials with recorded improvement both in disease manifestation and progress. But, unfortunately, till now, none of these treatments are approved for use and they are only for clinical trials.

But interest is growing in creating stem cell banks either from the umbilical cord of newborns to be used for these babies later on if needed, or directly from adults themselves.