Garlic, despite its offensive odor, has remained a part of the domestic arena with properties established in traditional and holistic healing practices. Natural healers know that garlic is a powerful medicine.

In their studies, scientists have found that garlic is indeed a powerful healer but that it doesn’t come without some dangers and side-effects.

Natural healers are aware of these side effects as well and often take them into consideration when suggesting garlic as a medicine.

The scent of garlic is one of its potentially harmful side-effects. Scent has a powerful but subtle affect on the mind-body relationship. The Prophet Mohammad (saw) once informed his followers: “Whoever has eaten [garlic] should not approach the mosque” (Sahih Bukhari 7:65 #362). At first this might seem like a personal request, but when one looks deeper, a larger picture can be seen through vibrational medicine. 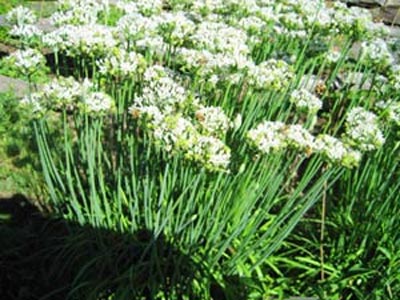 By agitating, centrifuging and finally supernating crushed garlic in some water; they were able to clear the infection by adding the garlic solution to the baby’s milk. (Image: Garlic chives)

Within the subtle energies of the human body, the odor of garlic blocks the throat, abdominal and base chakras. Chakras are energy centers in the body. All things being related, when the throat chakra is blocked there is an inability to express oneself emotionally.

When the abdominal chakra is blocked there is a sense of self-affliction with psychosomatic illnesses. Awakened, there is an ability to master one’s desires followed by increased intuition. Pertaining to the environment of the mosque, the odor would disturb one’s intent and affect one’s ability to submit in prayer.

The base chakra is concerned with the sense of being grounded. It influences the lower extremities as used in sujud (prostration), especially the thigh muscles and tissues and the circulation in the feet. When one isn’t grounded, there are hidden fears and an inability to focus on important issues.

When this chakra is awakened, one is calm and more able to initiate spiritual practices. If one’s mind is agitated in the state of prayer, then the act of prayer becomes purely physical. Therefore, the unity in congregational prayer becomes disturbed on an energy level.

As such, the sulfur content in garlic interferes with vibrational healing remedies and methods (Gurudas, p.62, 63). Fortunately there is a quick cure for this odor: chewing a sprig of parsley can eliminate any odor before visiting the mosque.

Medical science has also found a reason, however, why the odor of garlic is unpleasant and sometimes harmful. On the physiological level, when garlic is crushed, the sudden air exposure activates the enzyme allinase, which forms allicin (Gislason, p.3).

Allicin is the principle aromatic property in garlic that contains the sulfur containing terpene, the source of the odor. The process of cooking destroys the allinase. The sulfur in allicin releases bile from the gall bladder and decreases cholesterol in the liver (Indiantimes.com p.1).

Allicin destroys the hydrogen required by bacteria and interferes with the DNA polymerases needed for the replication of bacterial chromosomes (Healthology, p.2). When there is deficiency of iron in the blood, the sulfur interferes with vibrational medicine due to the sulfuric interaction with the ammonia in the skin (Gurudas, p.63).

Even though, this interaction with the skin can sometimes prove useful as well. Dr. Ronald Cutler and his team at the University of East London developed a cream containing allicin in a stable but odorless form.

Tested against 30 different samples of Staphylococcus aureus taken from patients, the extract killed all samples of the bacteria.

Campylobacter causes acute gastroenteritis and is viewed as a precursor to acute neurological diseases. It affects the young who may be exposed to contaminated animal products and water. Helicobacter causes chronic gastritis and has a role in the formation of peptic ulcers (Perez, p.1).

They have become increasingly resistant to antibiotics and made research on natural remedies imperative (MRC, p.2). Evidence shows that garlic supports the development of the natural bacterial flora whilst killing pathogenic organisms. 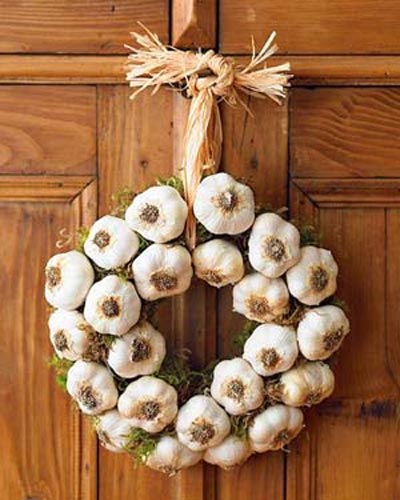 Garlic is known to reduce systolic blood pressure and lower the blood sugar.

Another of garlic’s many components is selenium. However, the amount of selenium is dependent on where the garlic is grown. Selenium is a part of the enzyme gluthathione peroxidase, which helps to detoxify the body by converting the hydrogen produced from white blood cells fighting foreign substances into water. Selenium is effective in destroying the chronic yeast infection caused by the fungus candida albicans (Healthology, p.2).

Professor Cywes of the South African Red Cross Hospital discovered a very serious case of candida infection when he operated on a baby. The infection had spread throughout the length of the esophagus and gastro-intestinal tract.

By agitating, centrifuging and finally supernating crushed garlic in some water; they were able to clear the infection by adding the garlic solution to the baby’s milk. The infection was eliminated within 48 hours. The solution was the equivalent to a bulb and a half of garlic daily (MRC, p.1).

The anti-clotting component in garlic, ajoene, is not present in preparations like garlic oil and tablets. It is released in the process of ingesting freshly crushed garlic (Gisalon, p.3). By preventing blood clotting, which builds-up plaque, one prevents the hardening of arteries that contribute to heart disease (Indiantimes, p.1).

However, anyone who takes blood-thinning drugs like Ticlopidine and Coumadin should avoid garlic, as a reaction occurs between these drugs and garlic –causing excessive bleeding to occur (Healthology, p. 1,2).

Thirty years of research has shown garlic to be effective in reducing cholesterol levels. Fresh garlic oxidizes blood fats that would otherwise increase the risk of heart disease and is affective in cancer prevention (HRF, p.2). A 1994 study of 41,000 women who consumed a weekly serving of garlic demonstrated a 35% decrease in the risk of colon cancer (HRF, p.2).

Garlic is known to reduce systolic blood pressure and lower the blood sugar. However, this means that garlic would not be the herb of choice for many hypoglycemics (those who suffer from low blood sugar).

Like all herbs, therapeutic amounts on personal biochemistry, contrary to mass- produced drugs. For instance, those with sensitive stomachs may not be able to tolerate raw garlic.

In Germany, herbs are sold for therapeutic use and are under obligatory standardization. The German Commission determined that 4000mcg of allicin is the equivalent of the required therapeutic dose (Healthology, p.2).

The virtues of garlic do not outweigh the disadvantages. Both aspects have a place in the scheme of things. However, like most things, one has to recognize how and when best to use it.