“It is Allah Who made out of the things He created, some things to give you shade; of the hills He made some for your shelter; He made you garments to protect you from heat, and coats of mail to protect you from your (mutual) violence. Thus does He complete His favors on you, that ye may bow to His Will (in Islam).”(Surat An-Nahl 16:81).

Allah has always provided us with trees for shelter, plants for nourishment, and flowers for healing. He also says, “O men! Eat the lawful and good things out of what is in the earth, and do not follow the footsteps of the Shaitan; surely he is your open enemy.” (Surat Al-Baqara 2:168).

Parsley is one example of these “lawful and good things” that is easily accessible and easy to use. Because it exists all over the world and grows in mostly every climate, parsley is too often underestimated. Cheap and easy to cultivate (it can be planted twice a year) it is usually used as a garnish in Western restaurants.

However, Muslims long ago discovered that this plant might contain some benefits beyond just decorating the dinner table. Perhaps this is because parsley is an indigenous herb in Middle Eastern cuisine.

Originally from Sardaigne, it is also called Petroselimum Sativum from the Greek word Petrosolinon, which means “leaves of rocks.” Although modern science can distinguish up to 40 varieties of parsley, only two are widely used in the kitchen: the curled-leaf and plain-leaf (or Italian) parsley.

The flat-leafed (or Italian) parsley looks like the Chinese cilantro to some people, so it is important to properly identify the herb (Alternet.org).

New parsley has been recently found (1978) in the sea as well. It is called sea parsley and resembles red seaweed. This new sea-parsley contains almost as many vitamins and amino acids as earth parsley (Collabo.com).

Hippocrates once has said, “May your diet be your medicine.” Today many herbalists around the world recommend parsley as one of these medicinal foods and as a revitalizing spring tonic. “In addition to providing essential nutrients, it balances the energy of the organs improving their ability to assimilate and utilize nutrients,” writes Dr Gillian McKeith in her book Living for Health (McKeith, p.21). 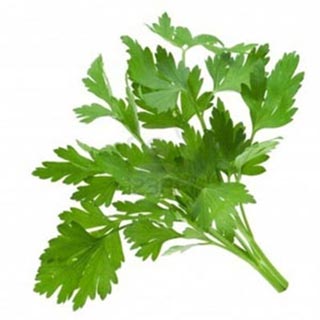 According to U.S. Department of Agriculture (USDA) statistics, one cup of minced parsley contains more beta-carotene than a large carrot, almost twice as much vitamin C as an orange, more calcium than a cup of milk, and 20 times as much iron as one serving of liver (Hurley).

She compiled the following list of all the vitamins and minerals parsley contains:

Parsley is also very abundant in fibers and chlorophyll, which purify, stop the spread of bacteria and help to increase immune response. It also contains many other important nutrients such as: lysine, glutamine, and vanadium (anyvitamins.com and aprifel.com).

The Prophet Mohammad (saws) said,“There is no disease that Allah has created, except that He has also created its treatment” (Bukhari). Indeed, through the ages, parsley has been used to treat several diseases such as cough, hair growth, arthritis and rheumatism. “It has helped in passing all stones in bladder infections,” writes Varro E. Tyler, in his book Herbs of Choice (Tyler, p.76).

Furthermore, parsley is a cleansing agent for the kidneys, liver and bladder and has a draining effect on cellulites. For women, it ameliorates estrogen production, nourishes the blood of the uterus and assists women with menstruation issues such as PMS and menopause.

Although it is an important herb for women, pregnant women should not use it, for it may bring on early labor by stimulating uterine contractions. Nursing women should also avoid it as it may dry up milk (allheath.com).

Finally, parsley also has uses around the home. It can keep a room smelling fresh and clean. When a person is frying food, a branch of parsley in the oil will keep the smell of the oil from spreading throughout the house. In this way parsley can assist Muslims in not only being healthy, but in maintaining a clean home as well.

This article was first published in August 23, 2001 and is currently republished for its importance.