Lemons are just one example of the simple bounties Allah has provided us with. Although they may just be a “customary fruit,” they contain flavanoids, which are often referred to as ‘natures biological modifiers,’ because of their ability to modify the body’s reactions to other compounds such as: allergens, viruses and carcinogens.

Lemons are usually known for their high content of Vitamin C – four times higher than that of oranges. Hungarian scientist, Albert Szent-Gyorgi, uncovered a synergy between pure vitamin C and a then unidentified co-factor in the peels of lemons and called the resulting compound Vitamin P.

Other important properties of lemons are their mineral contents. They contain 48.3% potassium, which nourishes the brain and nerve cells; 29.9% calcium, which builds strong bones and teeth; and 4.4% magnesium, which in conjunction with calcium, plays an important part in the formation of albumen in the blood.

In addition to their nutritional benefits, the smell and the taste of lemons can help fuel a general release of stress. In aromatherapy, lemon oil is used as a muscle relaxant and a skin and circulation stimulant. Rubbed on the face, lemons open up the pores releasing heat and refreshing the skin.

Lemons have other therapeutic effects on the body as well. Drinking lemon juice helps cleanse the lymphatic system, invigorate skin tissue and increase the blood flow (Gurudas, p. 167). This might be one reason for the popularity of lemonade on a hot, sticky day.

Eaten during pregnancy, lemons help build the developing baby’s bones. Lemons also aid in the digestion of heavy meals by producing the necessary enzymes and in the assimilation of protein, calcium, zinc and vitamins.

Lemons also have cholesterol – lowering properties, thus preventing hair loss and even causing hair regeneration. They counteract cases of anxiety and depression; stimulate the liver and the gall bladder, causing a release in congestion; stimulate the formation of valuable leukocytes in the fight against viral and infectious diseases; drain excess water in cases of water retention; reduce uric acid; and stimulate the lymphatic system in cases of cellulite and obesity (Gurudas, p. 168).

In order to fully benefit from their effects, lemons should be consumed without sugar. Otherwise the negative effects of the sugar (such as lowering immunity, interfering with digestion and leeching vitamins and minerals from the system) may outweigh their beneficial effects.

The limonenes and liminoids in lemons, and other citrus fruits, increase the activity of enzymes that detoxify certain carcinogens. These alkaloids bind mutated cells and help the body to eliminate them before they become carcinogenic (Messina p.2). 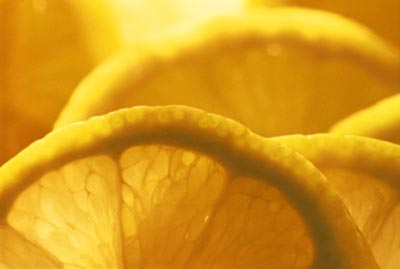 One tablespoon of pure lemon juice before each meal relieves asthma. 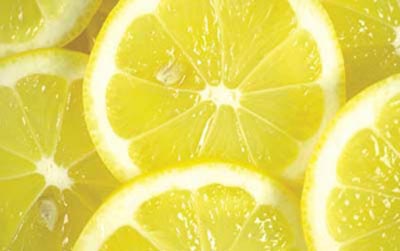 With an increase in low-fat cooking, lemons have become more popular in the West, because of their ability to add sparkle and freshness to dishes. Lemons add a clean, yet complex flavor to dishes that were previously laden with salt or fat.

Lemons, which cleanse the system, can replace vinegar, which opposes the action of gastric juices.

Slowly pour corn oil, a beaten egg and a pinch of salt to the juice of half a lemon. This makes one small jar, which can be added as a sauce to other recipes.

After lemons are washed and dried, use a grater to remove the outer yellow layer of the peel. This “zest” can be placed in a freezer for future use (Vegetarian Times, p.6).

This is a Middle Eastern recipe used to flavor chicken dishes, stews and salads. Wash the lemons well and cut them into quarters (but not all the way through) or in half if you are using limes. Put them in a wide necked jar (preferably glass or clay). Press the lemons down with a weight and add salt and water. The salted juices preserve the peels, which will soften and mellow in a month. The juice can be used for seasoning (Roden, p.63).

Remember that Allah (swt) gave us everything we may need. We merely adapt that bounty to the times by making new discoveries or rediscovering old applications.