The profits of giant fast food chains hit billions of dollars every year as hungry consumers all around the world continue to line up to get hamburgers or pizzas with French fries and sodas. Fast-paced citizens of the 21st century spend their money and risk their health to eat junk.

Mainly composed of fat and salt, fast food is nothing but that. Americans eat it to enjoy its delicious taste and to save their time and effort; non-Americans consume fast food to imitate the American behavior and to be cool and trendy. Both groups of people are gravely harming their health.

Basically, fast food is processed food; but what is processed food to begin with? Processed food is simply food that has been altered in a factory from the way in which nature presented it, as part of a bulk process where natural and chemical food additives are added. This leaves the final product without its naturally created nutrients like vitamins, minerals, and enzymes.

Besides giving the food its delectable taste, food additives keep it lasting unspoiled for a long time, which means that processed food is usually stored for a long time before it is purchased and eaten! The oldest natural food additives are salt, sugar, and vinegar; and although these are natural, an excess in their amounts seriously endangers the health.

Junk foods characteristically contain high amounts of salt (sodium chloride). Sodium is necessary for various metabolic functions; too much of it, however, is associated with an increased risk of hypertension (high blood pressure). Hypertension is a known risk factor for heart disease.

If this is the case with natural food additives, then how about artificial ones? With the advent of processed foods in the past thirty years, there has been a massive explosion in the chemical adulteration of foods with additives.

In his best seller, Fast Food Nation, Eric Schlosser reveals to the American public very interesting facts about what they eat. He talks about his experience in a factory in New Jersey where he discovered how the flavors of McDonald’s food products are fabricated. 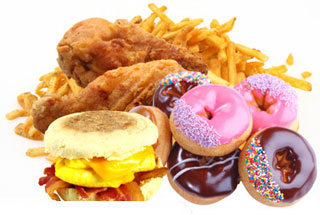 Current food processing methods gather many parts of many animals into one burger. The burger’s beef has to be deep-fried in oil at high temperatures over 300° C, and this goes for almost all the popular fast foods that have to be deep-fried, consequently, they become denatured and possibly even carcinogenic.

Moreover, there is a very interesting story to tell about the popular McDonald’s French fries exposing the way they are processed, and the flavors that distinguish them. For decades, McDonald’s cooked its French fries in a mixture of 7% cottonseed oil and 93 % beef tallow. The mixture gave the fries their unique flavor and more saturated beef fat per ounce than a McDonald’s hamburger.

In 1990, amidst a barrage of criticism over the amount of cholesterol in its fries, McDonald’s switched to pure vegetable oil. This presented the company with a challenge: how to make fries that subtly taste like beef without cooking them in beef tallow. A look at the ingredients in McDonald’s French fries suggests how the problem was solved. Toward the end of the list is a seemingly innocuous yet oddly mysterious phrase: “natural flavor”. That ingredient helps to explain why the fries taste so good.

Food additives interfere with what we drink as well as what we eat. Let alone the dangers posed by the chemical ingredients of soft drinks, additives put in the most popular beverages in the world are quite unsafe. Brominated vegetable oil (BVO) is used to keep flavor oils present in soft drinks in suspension thus giving the well-known cloudy appearance to these beverages.

Small residues of BVO are trapped in body fat, and it has not yet been scientifically proven that BVO is safe. Bromate, the main ingredient of BVO, is a poison. Just two to four ounces of a 2 percent solution of BVO can severely poison a child.

Another very ironic fact about soft drinks is that diet Coke and diet Pepsi are considered the way out for those who care to have a healthy diet. These people are unaware that instead of sugar, the artificial sweetener in the diet sodas is acesulfame K. This is linked to depression, insomnia, neurological disease, and a plethora of other illnesses; doctors even warn that acesulfame K may be carcinogenic.

We thus see how the mouth-watering tastes of the much popular American fast food diet are all about chemicals, artificial flavors and food additives that are added to the food in the course of a hi-tech manufacturing process. 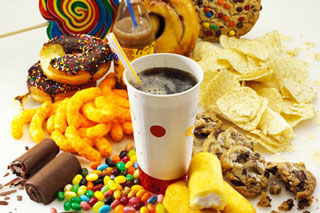 Simply put, fast food is high in fat and sugar – that is to say high in calories – and low in its nutrient value. Fast food is particularly high in saturated fats, generally preferred by the food industry because it is cheap and can withstand high cooking temperatures. It has been scientifically proven that saturated fats are correlated to cholesterol levels in the blood, and can therefore cause heart diseases.

Thus, hamburgers give us much more calories than we need and their calories come mainly from fats.

When it comes to sugar, it is enough to say that the typical can of soda contains an equivalent of 10 teaspoons of sugar.

Fast food thus offers much more calories than our systems can digest; and these extra calories are stored in our bodies in the form of fats. Excessive storage of fats in the body leads to obesity, which does not merely prevent people from looking slim, but it furthermore predisposes them to many disorders, such as insulin-dependent diabetes, hypertension, stroke, and coronary artery disease.

More fatally, obesity has been linked to an increased incidence of certain cancers, notably cancers of the colon, rectum, prostate, breast, uterus, and cervix.

If fast food and soft drinks mark the American way of life, then it is easy to understand why more than half of all adult Americans are overweight. Actually, both scientific studies and common sense indicate that fast food is the primary reason for obesity.

Consuming junk food does not only mean eating the chemical food additives that are added while the food is being processed, nor is it limited to looking fat and getting exposed to obesity-related illnesses. The problems of fast food are far more diversified.

“No two countries that both have a McDonald’s have ever fought a war against each other,” says Thomas Friedman, the well-known globalization theorist, and the Foreign Affairs columnist.

According to Friedman’s McPeace theory, McDonald’s might prevent wars; but can McDonald’s prevent the diseases caused by the junk it serves, such as obesity, diabetes, heart diseases, and even cancer?