Our mornings are usually followed with a brown colored milky tea. Have we ever wondered, what if someone handed us a buttery pink colored cup of tea?

I know most of us would just deny and fail to agree that it’s a tea, but there exist a traditional beverage in the valleys of heaven which is a paradise on Earth-Kashmir, the Noon chai or Kashmiri chai.

Although the exact origin of Kashmiri tea is still unclear, most Kashmiris think that this aromatic spicy traditional drink dates back to the times immemorial and it has been an integral part of their daily consumption for ages.

Many sources also trace origins of this drink to Yarkand valley in the Chinese-occupied Muslim Republic of Uyghurstan.

Noon chai is a traditional pink-colored salted tea beverage made in Kashmir. Noon chai is a prime classical salted cuisine in Kashmir and almost everyone takes this daily.The practice of Nun chai intake is slightly more prevalent in rural regions where agriculture is main profession. In these areas besides morning and afternoon, it is also often taken during working hours.

This peculiar beverage has unique method of preparation which is practiced exclusively in the Kashmir valley.

Noon chai is traditionally made from special tea leaves, milk, salt, pistachios, almonds, cardamom, and cinnamon and cooked in a special vessel called a samovar. A pinch of baking soda is added to help give it more of a pronounced pink color.

A recent variant preparation of this tea also includes sugar, but it isn’t traditionally consumed in Kashmir.

Noon chai is also served in many parts of Pakistan at special occasions, weddings and during the winter months when it is sold at many kiosks.

With the festive month of Ramadan on in Kashmir, people just relish this tea.

In a typical Kashmiri sehri (pre-dawn meal), Noon chai is preferred by mostly all which is accompanied with Geow-dar csot (bread made with ghee) from a local baker which is a Ramadan speciality, this salted tea is also preferred after the long hours of Tarawih prayers at night.

Some old people say some decades ago, people even used to break their fast with the salt tea. 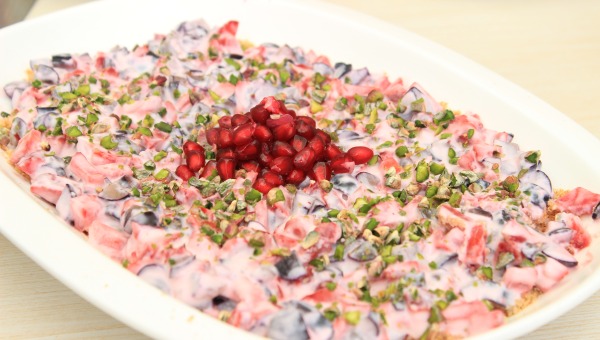 The green tea leaves used in the brewing of Kashmiri tea are the ones from camellia cinensis plant which can really be advantageous during the month of Ramadan as it’s a powerful antioxidant, inhibits formation of blood clots, and wards off chances of stroke and heart attack.There is a belief in the Kashmiri folklore that Noon chai is refreshing in the heat and resists the cold in winters. It’s found to be very nutritive.

The L-theanine, an amino acid component of the tea helps to reduce levels of stress and anxiety.

The digestive tracts during Ramadan are usually disturbed because we just binge on eating after iftar, so just sipping a cup of Kashmiri tea can help in relieving it as cardamom and baking soda appears to treat heart burns, gaseous distension, stomach and intestinal spasms.

Along with that it also helps in reducing the myalgic pains and makes our Tarawih prayers and long night prayers easier as baking soda is known to increase the alkalinity of the blood which reduces and offsets the acidity produced in the muscles during intense, anaerobic exercise that produces lactic acid most quickly.

The tired sleepy feeling can be overcome by having Kashmiri tea in sehri as it energizes, increases mental alertness, has a warming effect, reduces headaches and upholds fluid levels in the body.

The joint pains are also known to disappear to some extent due to presence of cinnamon in it.

To Keep a Watch

A high consumption of this salted tea (more than four cups a day) is independently associated with high risk for esophageal and gastric cancer.The per capita daily consumption of Noon chai ranges from 200 to 2,500 milliliters (mL) and most of the population likes to take it at high temperature which can cause thermal injury to the gastric epithelium.

Also, the naan which is served with Noon chai has added salt which contributes to the salt intake.

Salted tea prepared in copper vessels showed markedly high levels of copper, which may be responsible for the high plasma copper levels.

Anaemics should avoid Kashmiri tea as it can cause a drop in iron levels as the polyphenolics in the green tea function as iron chelators and prevent absorption of iron.

Just enjoy the healthy yummy buttery texture with a spicy nutty crunch which gives a lasting warm sensation because this chai truly is a liquid wisdom!Tea is a revered drink for the tea lovers, so a cup of Kashmiri tea at sehri and after iftar can be a refreshment.