Allah Almighty gives us so many opportunities to gain reward and in His mercy pardons our shortcomings:

Thus, death does not have to be a fearful tabooed subject. On the contrary, if seen in the light of the mercy and abundance of reward from Almighty Allah; it is the grand prize of the believer. Then, when the angel of death visits you, you will feel at ease for what is to follow…

The Scales of Deeds

One of the stages after death is the weighing of our deeds by Almighty Allah. Scales have always been a sign of justice not only in Islam but in different epochs and religions.

The Weighing of the Heart in Ancient Egypt

The ancient Egyptians believed that, when they died, they would be judged on their behavior during their lifetime before they could be granted a place in the Afterlife. This judgment ceremony was called “Weighing of the Heart” and was recorded in Chapter 125 of the funeral text known as the “Book of the Dead“.

Lady Justice is a common sight on courthouses and legal institutions. There is regional variation on her precise depiction, though certain fundamentals are constant: She carries a sword, scales for weighing, and usually (though not always) wears a blindfold. She is garbed in a Greco-Roman toga or tunica, in the tradition of classical goddesses, philosophers and prophets. Images of her can be found across the world.

The concept of a goddess of justice is old indeed, dating to ancient Egyptian and Greek times. The Egyptians had Ma’at, who stood for order and carried both a sword and the Feather of Truth. The Greeks had the goddess Themis, who stood for law, order and justice (and who, incidentally, was mother to the Fates, who themselves were noted for judging humanity). The Roman goddess of justice, Justitia, is the most direct inspiration, since she carried the sword, scales and blindfold we are familiar with today.

If a person’s sins exceed his merits, he will immediately die because of his wickedness as [Jeremiah 30:14] states: “[I have smitten you…] for the multitude of your transgressions.”

This reckoning is not calculated [only] on the basis of the number of merits and sins, but also [takes into account] their magnitude. There are some merits which outweigh many sins as implied by [I Kings 14:13]: “Because in him, there was found a good quality.” In contrast, a sin may outweigh many merits as [Ecclesiastes 9:18] states: “One sin may obscure much good.”

The weighing [of sins and merits] is carried out according to the wisdom of the Knowing God. He knows how to measure merits against sins.

“A just weight and balance are the LORD’s: all the weights of the bag are His Work” (Exodus 21: The Scales of Justice) 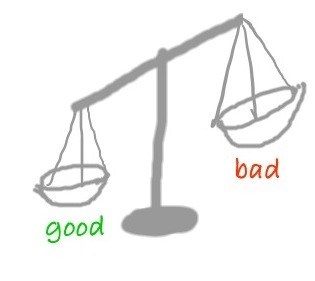 While the traditional “scale of justice” is usually regarded as a man-made notion, it actually had its origin in the Holy Scriptures: “16:9 A man’s heart deviseth his way: but the LORD directeth his steps. 16:10 A divine sentence is in the lips of the king: his mouth transgresseth not in judgment. 16:11 A just weight and balance are the LORD’S: all the weights of the bag are his work.”

Allah Almighty shows us the wisdom behind the Scales in the Quran, highlighting how it will be set so that everyone has clear proof that they will be dealt with justly and nothing – not even the weight of a mustard seed- shall be forgotten:

{And We shall set up Balances of justice on the Day of Resurrection, then none will be dealt with unjustly in anything. And if there be the weight of a mustard seed, We will bring it. And Sufficient are We to take account} (21:47)

Glad tidings for those whose scales will weigh heavily.

{And the weighing [of deeds] that Day will be the truth. So those whose scales are heavy – it is they who will be the successful.} (7:8)

{And those whose scales are light – they are the ones who will lose themselves for what injustice they were doing toward Our verses.} (7:9)