He who has named you the Muslims before and in this scripture. (22:78)

This verse, or rather a portion of it, draws our attention to the name has been given as followers of this religion of submission is a divine gift that God Almighty who named us as Muslims.

And this name goes back before our own time and far before the time of Muhammad (peace be upon him).

So the Prophet Muhammad is the first of the Muslims in the sense that he’s been the foremost of those who submit and the leader of all creation in submitting to the creator.

Now, if you look at the different religions which exist in our world today, oftentimes, the name is not something which emerge from within the tradition. Sometime they’ve been given a name which relates to that belief or system to its founding figure or to the place in which it was established and emerged.

So this applies for example to the word Christian, the New Testament itself suggests that the first people to use its label were the religion’s critics but then that term was be used by its followers the badge of honor linking themselves to the Christ, which is another word for the Messiah, Jesus (peace be upon him) and that is as well known the Quran and by extension, we ourselves as Muslims describe all the Prophets who came before as Muslims, as submitters.

It can not be correct to say that Jesus (peace be upon him) was a Christian but instead he was one who submitted to God and he was a Muslim.

So in this podcast, I want to touch on a few things that make this name Islam and Muslim special:

I’ve already talked about the first of these things that it is a divine gift, as such we can’t exchange it for another label or another name.

Some people try to call the Muslims ‘Muhammadans’ trying to ascribe us to Prophet Muhammad (peace be upon him) in a way that was done to Christians.

It could have been that as Muslims embrace this label because we love to be ascribed to Prophet Muhammad but we don’t want anyone to think that we worship the Prophet Muhammad (peace be upon him).

In other word, we won’t exchange the name that God has given us for another name; and by extension neither we won’t ascribe ourselves to other labels which describe which school of thought we follow, which theological school we ascribe to… even these theological things can be harmless and indeed can be useful and beneficial as long as we’re kept I proportion.

The point that I’m making is that all these labels, and all other descriptions should never obscure the central reality of being a Muslim and be a member of the worldwide universal Muslim community.

So what kind of the word is the word Islam?

Islam is a verbal noun, which is a verbal action, this means that Islam is a religion defined by this act of submission, or seeking peace through submission; it goes beyond the single action to be in a comprehensive way of life. 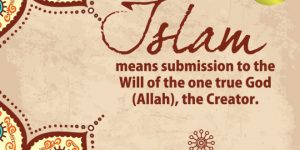 When someone becomes a Muslim, sometimes we say that he converted or some people would say reverted, but in Arabic there is no specific word for this instead the word used for Islam itself, so as if we say: “Sara Islamed last night” meaning that she became a Muslim.

So in short, this means that we, as Muslims, are defined by our actions. We are defined by how well, how fully we have submitted ourselves to the will of our creator. When we do that, we’re actually submitting ourselves along with the whole of creation as the Quran tells us that everything, the heavens and the earth, the heavenly bodies and animals and the plants… everything submits itself to the creator but the only ones who have the choice to submit or not to submit are human beings and the spirit beings known as Jinn.

These categories of creation have been given freewill. So when they submit, they are rewarded for that submission.

Now I have mostly been describing Islam as meaning submission, as as well known it also contains the meaning of peace. The word Islam derives from the root s-l-m which has the essential meaning of being free from any flaws or harmful things. So it means soundness, safety and of course peace.

This led some people to say “Islam means peace”. This statement itself is actually supported by a particular verse of the Quran (2:102) which says:

O you who believe enter into As-Silm completely and do not follow the footsteps of Satan.

This is a noun meaning security, safety, and leaving off war. And the opposite of war is of course is peace and this verse can indeed be taken as calling for peace which is one of the high goals of the Islamic way of life calling on us to live in peace with those around us.

But most of the Quran commentators have said that what’s intended by this verse is to enter wholeheartedly into the way of life which is Islam as such as silm (peace) is in fact a name for the religion which is also known as Islam.

Now, we should clarify that Islam is not only a religion of peace as some politicians have been saying in order to further their own agenda, Islam is a religion of life which means it provides guidance for all situations arise in our troubled world.

Yet even aggression is met with high virtues and in pursuit of peace. The goal is not to make the world submit, as some misunderstand, but to invent each soul to its own willful surrender to the creator alone not to any human force or to any worldly desire. 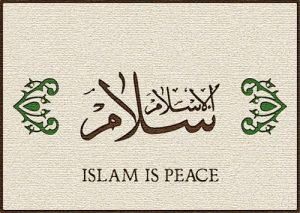 This is the true source for inner peace and outer peace and it is the most liberating concept ever taught to humanity.

And I want to conclude about emphasizing that Islam is a universal meaning and a universal message. It is not bound to any group of people, or even to any particular figure or event in history, it is another word for true religion itself; it is the direct relationship between any worshiper, human, animal, or even an object, the relationship between the worshiper and the only being who is worthy of worship.

That everyone who believes that submission is the duty towards our creator, we strive to perfect Islam, if you like, with a small eye, this submission to the creator.

And of course as Muslims, we believe that this needs to be done by heeding to the guidance of the Quran and the practical example and teachings of Prophet Muhammad (peace be upon him) who is the last and final messenger of God sent to the guidance of people to bring them into submission to their creator.