Asiya believed in Moses' message and held firmly to her faith.
aaa

Asiya, the wife of Pharaoh, was no ordinary woman. Her strength and her status will forever remain unsurpassed.

She was a woman who never allowed herself to be defined or limited by her painful circumstances, but rather carried in her such a deep faith and sense of self that she was willing to die for what she believed in.

It was for this reason that Prophet Muhammad (peace be upon him) mentioned her as one of the greatest women of all time.

Asiya’s story begins in Egypt where she lived with her husband, Pharaoh — known as the greatest tyrant of all time. After being told by a fortune teller that he would be overtaken by a man from the Children of Israel, Pharaoh ordered all male babies to be executed.

The Noble Quran describes the horrific life of the Children of Israel as follows:

{And remember, We delivered you from the people of Pharaoh: They set you hard tasks and punishments, slaughtered your sons and let your women live; therein was a tremendous trial from your Lord.} (2:49)

So when Prophet Moses (peace be upon him) was born, his mother feared for his life. But God assured her that he would be safe, and told her to place him in a basket and put him on the Nile. The Quran tells us:

{And We inspired the mother of Musa, (saying): “Suckle him [Musa], but when you fear for him, then cast him into the river and fear not, nor grieve. Verily! We shall bring him back to you, and shall make him one of (Our) Messengers.”} (28:7)

And just as God had promised, Prophet Moses came safely to shore, where he was found by Asiya, who was able to convince her husband to keep the child. God says in the Quran what means:

{Then the household of Pharaoh picked him up, that he might become for them an enemy and a (cause of) grief. Verily! Pharaoh, Haman and their hosts were sinners. And the wife of Pharaoh said: “A comfort of the eye for me and for you. Kill him not, perhaps he may be of benefit to us, or we may adopt him as a son.” And they perceive not (the result of that).} (28:8-9)

So Moses grew, under the protection of Asiya, in the house of Pharaoh. Moses grew to be a great prophet, who called his people to the worship of the one God. But because of the oppression of Pharaoh, few people believed in him.

Pharaoh proclaimed himself as God, and many of the Children of Israel were terrified to disobey him. God says in the Quran what means:

For those who had dared disobey Pharaoh and believe in Moses, was a grave punishment. When the magicians realized the truth of Moses’ message, they immediately believed in the one true God.

To them Pharaoh said:

{Believe ye in Him before I give you permission? Surely this must be your leader, who has taught you magic! Be sure I will cut off your hands and feet on opposite sides, and I will have you crucified on trunks of palm-trees: so shall ye know for certain, which of us can give the more severe and the more lasting punishment!} (20:71) 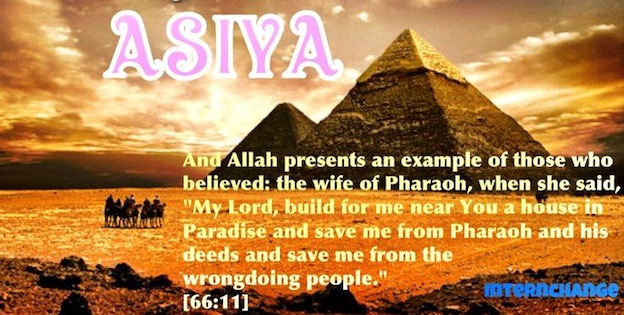 Yet despite this persecution, Asiya believed in Moses’ message and held firmly to her faith. That faith was so strong, she was willing to die for it. When Pharaoh found out that she believed, he tortured her severely.

Her belief in God was so strong, it made her an everlasting symbol:

{God sets forth an example for those who believe — the wife of Pharaoh who said: “My Lord, build for me with Thee a house in heaven, and save me from the Pharaoh and his doings, and save me from an unjust people.”} (66:11)

Asiya was a queen. She was the wife of one of the most powerful men to walk the earth. She lived a life of unparalleled wealth and luxury. And yet, she knew that her true home was in Paradise.

She had no attachment to this life. Asiya was not defined by the wickedness of the man she married. Her mind and her soul remained independent from her husband. And her heart was not a slave to his beliefs. She refused to submit to the tyranny of her husband, but chose instead to devout her soul and her life to God.

And in the story of Asiya is an everlasting example of a woman who chose the Hereafter over all of the glitter of this world, and whose love for God and the Home with Him inspired her to take on the greatest tyrant of all time and give her life in the process.