And thus, We have sent to you O Muhammad a revelation, and a mercy of Our Command.

You knew not what the Book is, nor what is Faith. But We have made it (this Quran) a light wherewith We guide whosoever of Our slaves We will.

And verily, you O Muhammad are indeed guiding (humankind) to the Straight Path. (Quran 42:52)

Prophet Muhammad (peace be upon him), the final Messenger from God, received the Quran in two stages.

From the Heavens to the Earth

On the night known as the ‘Night of Decree’, in the Islamic month of Ramadan, the Quran descended, from the Preserved Tablet to the Lowest Heaven. It then descended from the heavens to the earth in small stages.

According to his beloved wife Aisha:

The love of seclusion was bestowed upon him via vivid good dreams. (Al-Bukhari)

He would go to the cave known as Hira to worship the One God and contemplate life, the universe, and his place in the world.

One night during Ramadan an angel came to him and asked him to read. The Prophet, who was unable to read or write, replied: 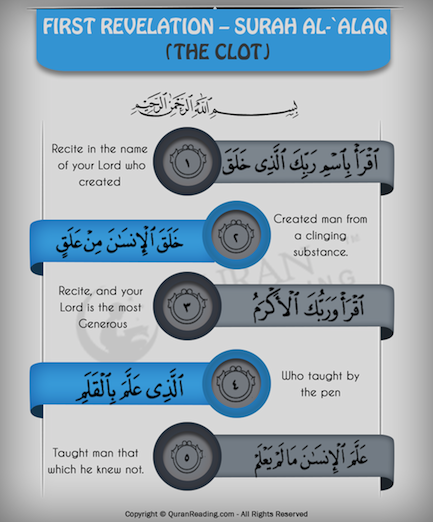 The angel then held him forcibly and pressed his chest so hard that he could not bear the pressure. The angel then released Muhammad and asked him once more to read. Again he replied

But I do not know how to read.

The angel held him forcibly three times and Muhammad responded each time that he did not know how to read (or asked what shall I read). The angel then related to him the first words of Quran.

Read!  In the Name of your Lord, Who has created (all that exists).  He has created man from a clot (a piece of thick coagulated blood). Read!  And your Lord is the Most Generous, Who has taught by the pen, He has taught man that which he knew not. (96:1-5)

After this first revelation, which Muhammad found frightening; he was not visited by the angel Gabriel again for an undetermined amount of time.

The next time he encountered him (the angel) he was walking alone. Prophet Muhammad heard a voice from the heavens. When he looked up he saw the angel sitting on a chair between the sky and the earth.

Muhammad was afraid and ran home seeking comfort and asking to be wrapped in blankets. The second revelation occurred at this time.

O you covered in garments arise and warn the people of a severe punishment… (74:1-5)

Aisha, the wife of the Prophet, narrates that when asked about how the divine inspiration was revealed Prophet Muhammad replied:

Sometimes it is like the ringing of a bell, this form of inspiration is the hardest of all and then this state passes after I have grasped what is inspired. Sometimes the Angel comes in the form of a man and talks to me and I grasp whatever he says. (Al-Bukhari)

As the words of Quran were revealed to Prophet Muhammad he began to commit them to memory.

Memorization was considered important and was widely practiced even in the early years of Islam. Prophet Muhammad requested that his companions memorize Quran and used various measures to assure that the revelation was preserved in their memories.

According to Ibn Ishaq, compiler of one of the first biographies of Prophet Muhammad, Abdullah ibn Mas’ud was the first man, after Muhammad, to recite the Quran publicly and on this occasion was severely beaten. Prophet Muhammad’s closest companion Abu Bakr was also known to recite Quran outside his home in Makkah.

Quran was memorized by the companions during Prophet Muhammad’s lifetime and this tradition has continued through the following generations.

Even today Muslims unable to read Arabic memorize the exact same words that were memorized by the Arabs of the 7th century CE. The majority of the Arabs were unlettered, including Prophet Muhammad; however the importance of the written word was well understood.

Preserving the divine revelation was paramount; therefore trustworthy and knowledgeable people memorized and wrote down the words of Quran.

Read: How was the Quran Well Preserved and Guarded?

These included the four men destined to follow Muhammad as leaders of the Muslim nation and a man named Zaid ibn Thabit, who would be instrumental in the preservation of Quran for the many generations to follow.

Writing materials were difficult to obtain and in these very early days portions of Quran were written onto animal skins, thin light colored stones, bones, and even bars.

The companions would write down the words of revelation and Prophet Muhammad would listen to the men recite from the written word to make sure there were no mistakes. It could be said that the Quran was written down under the direct supervision of Prophet Muhammad.

The Quran was not revealed in order, however the Angel Gabriel instructed Prophet Muhammad on how to compile the Quran in the divinely inspired correct sequence.