Today Jesus’ true followers are still fasting according to God’s pure instructions. Muslims are the true followers of Jesus and all of God’s Messengers.
aaa

The Gospel of Luke adds the detail that “in those days he did eat nothing: and when they were ended, he afterward hungered” (Luke 4:2).

Since Jesus fasted, his true followers will also fast, if they indeed follow his teachings. He said:

If ye continue in my word, then are ye my disciples indeed. (John 8:31)

People had complained to Jesus saying:

But Jesus replied that as long as he is with them his disciples should not fast, but after he is taken away then “they will fast in those days.” (Luke 5:35)

This is why Jesus also gave them instructions on how to fast for the sake of God (Matthew 6:16-18). If they were never to fast, such instructions would be pointless.

The Bible shows that the disciples were fasting afterwards:

The Bible mentions fasting as one of the observances of a minister of God (2 Corinthians 6:5), and “fasting often” as a proof of the worth of a disciple of Jesus. 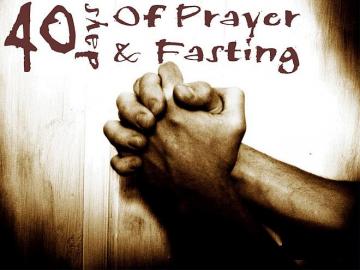 Luke 5:33 quoted above reveals that (a) fasting means abstinence from eating and drinking, and, (b) that although the disciples were not to fast until after Jesus was taken away, Jesus himself continued to fast, otherwise the complaint would have been against him also.

The disciples were unable to drive out a demon from a boy, but Jesus drove it out. When the disciples asked how he did it, he said that this kind can be driven out only “by prayer and fasting” (Mark 9:29).

This shows that because the disciples were not fasting they could not drive out the demon, and, that Jesus could drive it out because he was fasting. Some copyists attempted to change this verse by leaving out the words “and fasting”.

This is how, for example, the Revised Standard Version reads. But this reading gives the passage an impossible meaning that Jesus’s disciples were not praying either.

God rescued us from this uncertainty by revealing his final incorruptible message in which He instructs all able believers to fast for a month each year.

Today Jesus’ true followers are still fasting according to God’s pure instructions. Muslims are the true followers of Jesus and all of God’s Messengers.

All Bible references are to the King James Version except where stated otherwise.