{It is We Who have sent down the remembrance (i.e. the Quran) and surely, We will guard it from corruption.} (15:9)

When God revealed His words of guidance for the whole of humankind – the Quran- He guaranteed to preserve it.

One of the ways in which it was preserved was that the men, women and children around the Prophet Muhammad memorized Quran, paying careful attention to each word.

In the very early days of Islam the emphasis was on memorization, however soon, those who had mastered the art of reading and writing began to write down the words of Quran on whatever writing material available. They wrote on flat stones, bark, bones, and even animal skins.

“Let him bring the board, the ink pot and the scapula bone.” (Al-Bukhari)

In the lifetime of the Prophet, the Quran existed on bits and pieces of writing material, rather than in book form.

One of the reasons that Quran was not, at that stage, in the form of a book was that it was not revealed in order. Rather the chapters and verses were revealed over a period of 23 years often in response to happenings in the life and times of the early Muslim community. However, the order of the chapters and verses of Quran was known to Prophet Muhammad. When the Angel Gabriel would reveal the divine words of God, he would also issue instructions as to what verses and chapters belonged where.

The Quran was written down under the direct supervision of Prophet Muhammad. Uthman, one of the Prophet’s closest companions recalled that:

“When something was revealed to him, Prophet Muhammad would call someone from amongst those who used to write for him and say:

“Place these verses in the chapter in which such and such is mentioned.” and if only one verse was revealed he would say:

“Place this verse in this chapter”.

Thus at the time of the Prophet’s death pieces of Quran were held in trust by many members of the Muslim community. Some had only a few pages from which they were learning to recite, others such as the scribes, had several chapters and still others had pieces of bark or animal skin containing only one verse. 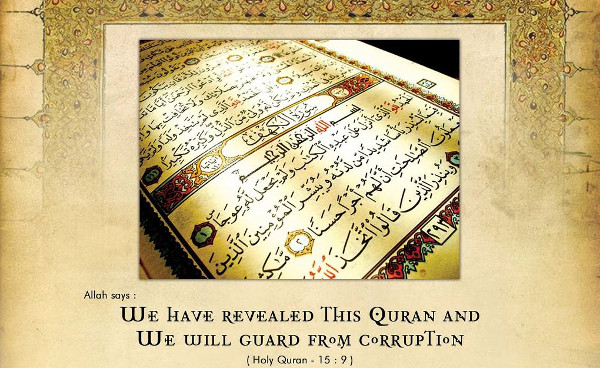 During the time of Abu Bakr, the man chosen to lead the Muslim nation after the death of Prophet Muhammad, the wider Muslim community found itself in a time of civil strife. False Prophets arose and many bewildered people, unable to sustain their faith without Prophet Muhammad, left the fold of Islam. Battles and skirmishes took place and many of the men who had memorized the Quran lost their lives.

Abu Bakr was afraid that the Quran would be lost, so he consulted some of the senior companions about compiling the Quran into a single book. He asked Zaid ibn Thabit, to oversee this task. At first, Zaid felt uneasy about doing something that Prophet Muhammad did not specifically authorize. However, he did agree to collect pieces of Quran, both written and memorized and compile a book – the Mushaf. In the traditions of Prophet Muhammad, we find Zaid ibn Thabit’s own recollection of how the compilation of Quran came about.

“Abu Bakr sent for me when the people of al-Yamamah had been killed (i.e., a number of the Prophet’s Companions who fought against the false prophet Musaylimah). I went to him and found Umar ibn al-Khattab sitting with him.  Abu Bakr then said to me, ‘Umar has come saying the casualties were heavy among those who knew the Quran by heart, and I am afraid that more heavy casualties may take place on other battlefields, whereby a large part of the Quran may be lost.  Therefore I suggest that you (Abu Bakr) order that the Quran be collected.”

I said to Umar, “How can you do something that the Messenger of God did not do?”

Umar said, “By God, this is something good”.

Umar kept on urging me to accept his proposal until God opened my heart to it and I began to realize the good in the idea.  Then Abu Bakr said (to me).

“You are a wise young man and we do not have any suspicion about you, and you used to write the Divine Inspiration for the Messenger of God, so search for the fragmentary scripts of Quran and compile them into one book.”

“By Allah if they had ordered me to move one of the mountains, it would not have been heavier for me than this (ordering me to compile the Quran).  Then I said to Abu Bakr, “How can you do something that the Messenger of God did not do?”  Abu Bakr replied:

Abu Bakr kept on urging me to accept his idea until God opened my heart to that to which He had opened the hearts of Abu Bakr and Umar. Therefore, I started looking for the Quran and collecting it from what it was written on, palm stalks, thin white stones and also from the men who knew it by heart, until I had collected it all.” (At-Tirmidhi)

Zaid had memorized all of the Quran and had been Prophet Muhammad’s most trusted scribe; therefore, it would have been possible for him to have written the whole Quran from his own memory. However, he did not use this method alone. He was very careful and methodical in his compilation of the Quran and would not write down any verses unless they had been confirmed by at least two of Prophet Muhammad’s Companions.

Thus, the Quran came to be written and compiled in book form. It remained with Abu Bakr until his death, at which time it came into the possession of Umar ibn al Khattab.

After Umar’s death, it was entrusted to his daughter Hafsah. This however is not the end of the story of Quran. In the time of Uthman, the third leader of the Muslim nation, the book in which the Quran (the words of God) is contained, the Mushaf, became standardized. The Quran was no longer written in the various dialects of Arabic.

In Part 4 we will discover how the Mushaf known as the Uthmani Quran, came into being.