It is inconceivable that Islam would require the killing of all non-Muslims when strong language mandating kindness to non-Muslim parents is found in the Quran.
aaa

“All of humanity is a target”. This is what the extremists want you to believe. They share a common view on the Quranic verse:

Kill them wherever you find them.

To them, the verse is an order for Muslims to kill all non-Muslims. These extremists who happen to be Muslims, Christians, Jews, Hindus, Atheists, etc., fuel apocalyptic fear with their extreme interpretations.

The Quran, however, discredits them. Someone looking to portray Islam as violent could easily read into a Quranic text their own ideas and biases by plucking it out of context. This is called proof texting.

The same faulty method can be applied to the Bible:

But those enemies of mine who did not want me to be king over them- bring them here and kill them in front of me. (Luke 19:27)

This is what the Lord, the God of Israel, says:

‘Each man strap a sword to his side. Go back and forth through the camp from one end to the other, each killing his brother and friend and neighbor.’

The Levites did as Moses commanded, and that day about three thousand of the people died. (Exodus 32: 27-28)

Taken out of context, these biblical quotes can be used to forge a biased interpretation. Because “Kill them wherever you find them” was referring to the pagan aggressors who had violated the Hudaybiyah Peace Treaty with an act of war, it would be absurd to claim that “them” in the verse means all non-Muslims.

Here are some simple reasons why:

The Quran states that love and mercy are qualities that must exist in a marriage.

And of His signs is that He created for you from yourselves mates that you may find tranquillity in them, and He placed between you love and mercy. (Quran 30:21)

The extremists want people to believe that Islam seeks to extinguish all non-Muslims from the face of this earth– How then, are Muslim men supposed to be in love with their non-Muslim wives?

The problem with out-of-context interpretations is that they just don’t mesh with the rest of the document.

I Got Your Back

Some critics, unfortunately, have propagated the word “dhimmi” as a pejorative term for non-Muslims. However, “dhimmi” in Arabic essentially means, “of responsibility”. It is a term that is used to signify safeguarding others with an uncompromising responsibility. The same term is used to show protection and care from Allah to the believer:

Whoever prays the morning prayer is under the dhimmah (responsibility) of Allah. (Muslim)

The word “dhimmi” is applied to non-Muslims in order to emphasize the responsibility Muslims must have for non-Muslims. Muslims are tasked to stand up for their rights and to protect them with their own lives.

Seeing Ibn Taymiyah’s resolve on this issue, the Tartar ruler freed all of them. Since the time of the Prophet Muhammad, Muslims held on to this Islamic law requiring Muslims to take responsibility for non-Muslims living in their midst.

How can extremists reconcile this teaching of Islam with their extreme interpretation of violence?

Islam teaches us to revere and respect our parents, not only parents who are Muslim. The Quran makes special mention of kind treatment towards parents who are not Muslim:

And We have enjoined upon man [care] for his parents. His mother carried him, [increasing her] in weakness upon weakness, and his weaning is in two years. Be grateful to Me and to your parents; to Me is the [final] destination. But if they endeavor to make you associate with Me (polytheism) that of which you have no knowledge, do not obey them [in that] but accompany them in [this] world with appropriate kindness. (Quran 31:15)

It is inconceivable that Islam would require the killing of all non-Muslims when strong language mandating kindness to non-Muslim parents is found in the Quran.

Jizya is a nominal and refundable tax levied on men of military age in return for the Muslim state’s protection of their communities. In today’s money, it would be anywhere from $160 USD to $640 USD annually per male depending on the economy. The overwhelming majority of the population would be exempted from the jizya: women, children, priests, and the elderly.

In addition, any man serving in the state military would be exempt and would receive a salary instead. If the Muslim state was not able to protect a community, the jizya would be refunded. What’s interesting, is that the Jizya is offered to belligerent nations that seek to attack a Muslim state as an alternative to hostility- an opportunity to kill non-Muslims.

If Islam’s objective was to annihilate non-Muslims, why would regulations that thwart war exist, and why would Islam mandate the protection of non-Muslims with a refund policy?

Peace at All Costs

Years after being wrongfully expelled from Makkah, the Muslims headed to Makkah unarmed for a religious pilgrimage. The pagans blocked the road, preventing them from continuing their peaceful pilgrimage. This was painful for the Muslims who were longing to complete their pilgrimage and visit their hometown.

The pagans offered a one-sided peace accord favoring themselves and requiring the Muslims to cancel their pilgrimage and return to Madinah. Emotions soared due to the unjust proposal. Some Companions believed they should continue the pilgrimage and not sign the lop-sided treaty.

The Prophet Muhammad disagreed. He had the accord signed, canceled the pilgrimage and returned to Madinah- all for the sake of peace.

The Prophet’s decision was in line with the Quranic directive:

And if they incline to peace, then incline to it [also] and rely upon Allah. Indeed, it is He who is the Hearing, the Knowing. (Quran 8:61) 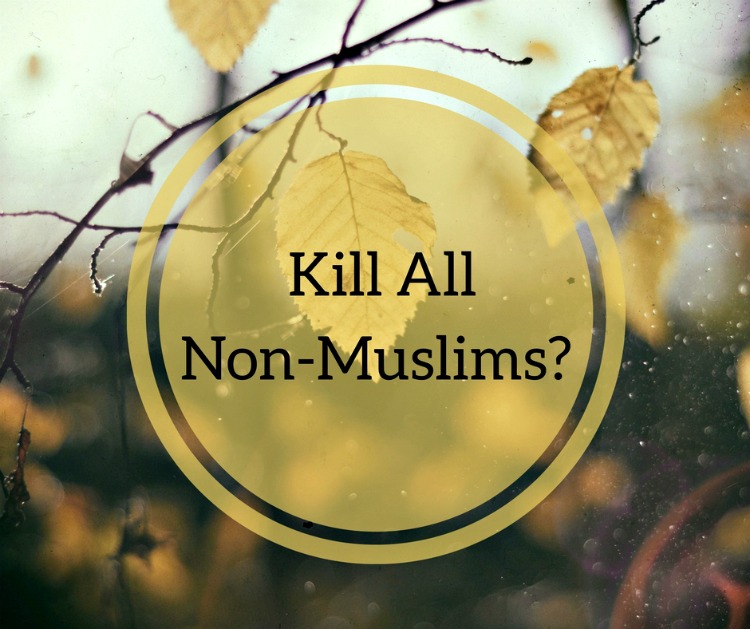 With such a peace mandate, could a Muslim’s modus operandi ever be violent?

Many opportunities for Muslims to kill non-Muslims occurred during the Prophet’s life, but it just didn’t happen.

“Who will save you from me?” the idolater asked.

The man began to tremble and dropped his weapon. The Prophet Muhammad then asked the man:

“Will you testify that there’s nothing deserving of worship except God and that I am the Messenger of God?” (Al-Bukhari)

Despite replying in the negative, Muhammad allowed the man to go back to his people unharmed.

The more we dig into the teachings of Islam, the more the absurdity of extremists’ interpretations of the Quran becomes apparent.