For a Muslim, the Quran is the word of God; literal word of God communicated to His last Prophet and Messenger, Prophet Muhammad (peace be upon him), through Angel Gabriel.

For a Muslim, this is the ultimate source of authority because it’s not only revelation or inspiration of God, it’s verbatim word or revelation of God.

Now as we compare that so that our respected audience from the Jewish or Christian background can at least relate to this understanding, this is not unusual.

In fact, In Islam, Judaism, and Christianity there is this notion of God revealing His will to humankind. I believe that there are other religions as well who depend as authority on scriptures also that they believe have some form of revealed nature.

Comparing the Quran and Bible

If we look into the Bible, we will find that there are instances or statements that appear to be also sort of verbatim word of God, or the closest thing to that.

For example, the Ten Commandments when God said to Moses “Thou shall do this, or Thou shall not do this”, it doesn’t come in a form where God says I inspired Moses or Moses says God revealed this to me. It appeared to be verbatim word of God. So that comes the closest to the concept of revelation of the Quran to Muslims.

The only difference perhaps I can see is that in the Bible, there are like I said sections which appear to have been direct word of God, not just inspiration, but the Bible does contain also biography about prophets, writings by their followers, reports of their particular religious experiences, so these are all intermingling.

Many of my Christian and Jewish brothers and sisters, when we get into dialogue you hear them also saying that from their perspective also there is another from of revelation which is more of an inspiration.

You read in the Hebrew scripture God inspired His servant so and so. So it implies that the revelation is not exactly word for word what God revealed, like what could be the case with the Ten Commandments.

But mainly it’s more of an inspiration, and in Islamic tradition we have a parallel to that also and that is in the so-called Hadith, or the words and actions of the Prophet of Islam, because Hadith or the sayings of the Prophet are believed by Muslims also to be inspired by God, but it is not exactly word for word because the Prophet used his own words to express or communicate those messages. That might be to some extent parallel to what can be found in the Bible.

So in that sense it does not appear to me really that Muslims’ understanding about the Quran is that vastly different from the basic notion of revelation, especially in revealed religions of the People of the Book, as the Quran called them, in that sense and in terms of its authority and what it means to Muslims.

Muslims perhaps are more confident about the revelatory nature of the Quran as word for word revelation. This is a basic article of faith in Islam without which a Muslim cannot claim really to be a Muslim.

So we can’t compare apples and oranges when you get some kinds of scriptures for example that may combine the word of God and interpretation of humans, it would not from the Muslim perspective have the same authority as a book like the Quran which is A to Z nothing but the verbatim word of God. 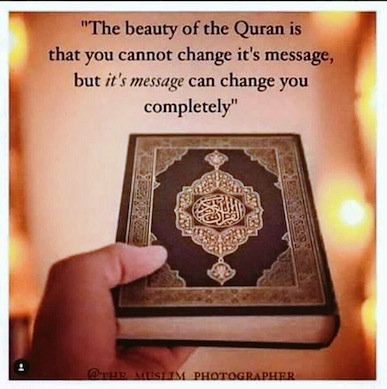 In essence, the message of the Quran is to bring to our attention that we were not created in vain, and that we will be held responsible for our conduct on this earth.

In the Quran, God indicates that He created the human to be His trustee on earth. This is actually an honor given by God to the human being, dignity to be the trustee of God even though He doesn’t need our worship and our obedience. It is for our own benefit.

The message of the Quran is to say or believe that guidance that is coming from the Creator of the universe is the ultimate guidance, for God has the ultimate wisdom, power, and knowledge.

And God alone is the ultimate authority and should be obeyed without qualification, obedience that is based not just on fear or reward but on the love of God.

The Quran generally gives broader guidance in most aspects within concepts, and there are some details there, but normally to the broader guidance so as to conduct our lives according to the will of God.

And the Quran finally indicates that since a human being is a free agent, he or she can choose to obey God or disobey, to believe or reject faith.

So that in a way can be put as a capsule or a capsulized nature or summary on the Quran, because it is in my humble belief as a Muslim that all prophets of God have taught this exact same core message as the Quran taught.