While Prophets and Messengers of God have never committed disbelief, polytheism, or major sins before or after prophethood, minor sins may rarely have occurred.
aaa

Within the layers of darkness, beneath the pitch-black sky, deep in inky waters, engulfed by a gigantic sea creature, Jonah sat distressed.

Subsequently, he appealed to the Light of the heavens and earth:

There is nothing worthy of worship except You. You are beyond all flaws– surely, I had been among the wrongdoers. (Quran 21:87)

After his prayer, God responded to His prophet and delivered him from the sea to the shores.

How could a Prophet of God, who was to be a role model for society, be a “wrongdoer”?

If God wanted angels to dwell on earth, that could have happened; but God chose fallible humans instead. The Prophet explained:

If you were not sinning, God would have created a creation that would sin and be forgiven. (Muslim)

Without sin, a believer could marvel himself endlessly for his “piety”, and disdain those around him. The Prophet warned of this conceitedness:

If you were not sinning, I would fear for you what is greater than that: self-amazement, self-amazement. (As-Silsilah As-Sahihah– Hasan)

Sin, then, has a role in the development of emotional intelligence. The after-sin effect should cause introspection, make the sinner understand why the mistake happened; instill humility, make him realize he is vulnerable; and evoke empathy, make him walk in the shoes of others who have slipped. In essence, the effect has the potential to shatter big egos. These are all positive outcomes.

Just as sin should have positive outcomes, righteousness should not have negative ones. Righteousness, therefore, should not permit one to disparage, debase, or curse sinners. Verbal attacks against a sinner are an intrusion between a slave and His Master.

A drunkard was brought forth to the Prophet on many occasions for the penalty of drinking. A bystander at one of the occasions, noticing the frequency of the drunkard’s penalties, said:

“O God, curse him! How often is he brought forth!”

Was it permissible to ridicule and issue a public condemnation?

Do not curse him! By God, I have not known except that he loves God and His Messenger. (Al-Bukhari)

If “every son of Adam will be a sinner”, sin is not the main problem. The main problem, however, is the persistence of sin. As a result, the Prophet completed his statement by saying:

Every son of Adam will be a sinner. But, the best of sinners are those who repent a lot. (At-Tirmidhi- Sahih)

Although those who repent a lot are the best of sinners, the statement infers that the other sinners are not automatically utterly bad; the frequent drinker is a case in point.

A believer should, therefore, not use someone’s sin to jack up his own image; that if he publicly condemns and debases a sinner, he is somehow immediately promoted to being the better one. Firing ad hominem attacks is such a convenient opportunity for self-promotion that the Prophet feared people might target even a Prophet.

It is not proper for anyone to say: ‘I am better than Jonah, son of Matta. (Al-Bukhari)

While Jonah received a unique reprimand from God by dwelling in a sea creature, it does not justify for anyone to think that they are better than Jonah.

While Prophets and Messengers of God have never committed disbelief, polytheism, or major sins before or after prophethood, minor sins may rarely have occurred. Bible texts and exegesis of the Quran that recount immorality of Prophets like that of David, Lot, etc., are false. 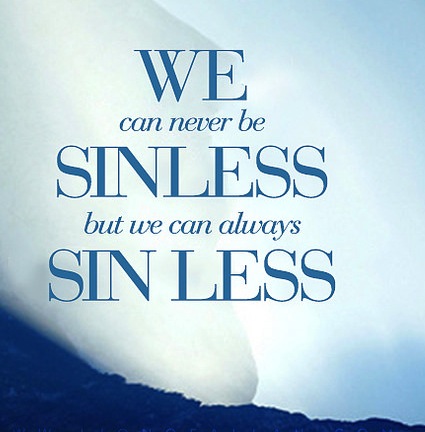 Moreover, committing rare minor sins in the face of abundant good deeds does not blemish a record but does indicate fallibility. Accordingly, perfection is only for God.

In addition, the term “minor sins” when used with Prophets, at times, is used as a hyperbole. When compared to their unparalleled dedication to pleasing God, some actions, even though permissible, are called “minor sins.”

For example, when Prophet Abraham told a King, who stole wives but not sisters, that his wife was his sister, the Prophet Abraham considered his words to be a “lie”. Technically, he was not lying since she was his sister in Islam and humanity. Also, he said “the lie” to protect his wife from the King’s debauchery, which makes the “lie” permissible in the very least, if not an obligation.

In fact, the devout dedication of Prophet Abraham to please God, and his dislike of contradicting the truth, made him consider it as a lie. The Prophet Abraham will refuse to intercede with God on the Day of Judgment, citing his “lie” as the reason:

Finally, Prophetic sin teaches us, among other things, morals and wisdom. Here are two valuable lessons that surface from Prophetic sin.

If the best of sinners are those who repent a lot, repentance is an indispensable act that needs to be performed properly. A major characteristic that features the Prophets’ repentance is immediateness.

Noah questioned God about saving his son during the flood. After God reminded him that he was not to ask about those who lagged behind, Noah instantly said:

My Lord, I seek refuge in You from asking that of which I have no knowledge. And unless You forgive me and have mercy upon me, I will be among the losers. (Quran 11:47)

This immediateness only comes about from immense love and humility for God. In contrast, Satan did not ask God for forgiveness but asked for respite instead. Delaying or avoiding God’s forgiveness is a byproduct of pride and arrogance.

Immediateness does not mean that forgiveness should be asked only once, however. A genuine repentance will cause lasting remorse. As we have seen, the Prophet Abraham’s remorse extended all the way into the Day of Judgment.

Sin can make one feel unworthy of pursuing goals. However, sin should not be allowed to impede the doing of good, otherwise, the sinner will end up in a downward spiral.

When God told Moses to warn Pharaoh and his people, the Prophet Moses recalled his killing-mistake and said:

In spite of that, God commanded Moses to continue with his mission and said:

As a result, a whole nation was saved and the oppressors were drowned.

Prophets and Messengers are the best role models for humans. Even when they made rare mistakes, their actions teach us how we can be better humans when we face challenges.