It is necessary to base human relations on forgiveness. We cannot expect God's forgiveness unless we also forgive those who do wrong to us.
aaa

This article first appeared at http://www.forgivenessworks.org

God has granted intellect to human beings. The intellect entails responsibility. The more intellect a person has the more he/she is responsible.

It is said: “to err is human and to forgive is divine.” Both parts of this statement are very true. As human beings we are responsible, but we do also make mistakes and we are constantly in need of forgiveness.

There are many names of God given in the Quran. They are called “Most Beautiful Names” and they indicate many different and diverse attributes and qualities of God. Some of these names are related to His mercy and forgiveness. Let us look at some of these names:

This name occurs in the Quran more than seventy times. There are other names from the same root, such as Ghafir and Ghaffar. The meaning of the Arabic word “ghafara” is to cover, to hide and from it comes the meaning “to excuse,” “to pardon,” “to remit” and “to forgive.” God does all these things. In the Quran, it is mentioned that God does not forgive the Shirk (without repentance) but He may forgive every other sin for whomsoever He wills. (Al-Nisa’ 4:116) We must turn to God to seek His forgiveness.

This has another part of forgiveness. This name occurs in the Quran five times. Literally the word ‘Afw means “to release,” “to heal.”“to restore, to remit.” Thus in relation to God it means “to release us from the burden of punishment due to our sins and mistakes,” “to restore our honor after we have dishonored ourselves by committing sins and making mistakes.” Sometimes in the Quran both names: ‘Afuw and Ghafoor come together.

3. Al-Tawwab: The Acceptor of Repentance. 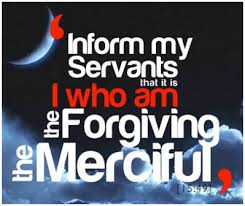 This name of God is mentioned in the Quran about 11 times. God accepts the repentance of those who sincerely repent and turn to him. The word “tawwab” gives the sense of “oft-returning” which means that God again and again accepts the repentance. We make sins and mistakes then we repent, He accepts our repentance. Then again we commit sins and make mistakes and when we repent, He again very kindly accepts us and gives us another chance.

This name is mentioned fifteen times in the Quran. This means that God is not quick to judgment. He gives time. He forebears and is patient to see His servant return to Him.

5. Al-Rahman and Al-Rahim: The Most Merciful and Compassionate.

The Quran teaches that God is a Judge and He also punishes, but God is not bound to punish. The justice of God, according to Quran is that God does not and will not inflict undue punishment on any person. He will not ignore the good of any person. But if He wishes to forgive any sinner, He has full freedom to do that. His mercy is unlimited and His love is infinite.

There are many verses in the Quran and sayings of the Prophet Muhammad (peace be upon him) on God’s love, mercy and forgiveness. In one of the prayers that the Prophet taught, he said: “O God, You are most Forgiving One, You love to forgive, so forgive me.” ( At-Trimidhi & Ibn Majah). We need God’s mercy and forgiveness all the time. It is wrong to assume at any time that one will find eternal salvation without the forgiveness of God.

Just as it is important to believe in God’s mercy and forgiveness, it is also necessary to base human relations on forgiveness. We cannot expect God’s forgiveness unless we also forgive those who do wrong to us. Forgiving each other, even forgiving one’s enemies is one of the most important of Islamic teaching. In the Quran God has described the Believers as:

{those who avoid major sins and acts of indecencies and when they are angry they forgive.} (Al-Shura 42:37)

{The reward of the evil is the evil thereof, but whosoever forgives and makes amends, his reward is upon God} (Al-Shura 42: 40) 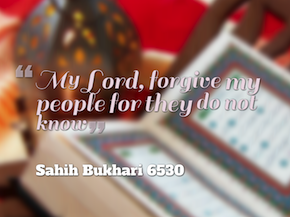 In another place the Quran says:

{If you punish, then punish with the like of that wherewith you were afflicted. But if you endure patiently, indeed it is better for the patient. Endure you patiently. Your patience is not except through the help of God…} (Al-Nahl 16:126-27)

In one the famous sayings of the Prophet (peace be upon him) it is reported that he said that God commanded him about nine things. One of them he mentioned was “that I forgive those who do wrong to me.”

Prophet Muhammad was the most forgiving person. He was ever ready to forgive his enemies. When he went to Ta’if to preach God’s message to its people, they mistreated him. They abused him and hit him with stones. He left the city humiliated and wounded.

When he took shelter under a tree, God’s angel appeared to him and told him that God was very angry with the people of Taif and sent him to destroy them because they mistreated God’s beloved Prophet. The Prophet prayed to God to save the people of Ta’if, because what they did was out of their ignorance. He said:

“O Allah, guide these people, because they did not know what they were doing.” (Al-Bukhari)

When he entered the city of Makkah after the victory, the Prophet  had in front of him some of his staunchest enemies. Those who fought him for many years, persecuted his followers and killed many of them. Now he had full power to do whatever he wanted to punish them for their crimes.

It is reported that the Prophet asked them:

“What do you think I shall do to you now”

They expected nothing but retaliation and pleaded for mercy. The Prophet said:

“Today I shall say to you what Joseph (referring to Prophet Yusuf -peace be upon him- as mentioned in the Qur’an, Yusuf 12:92) said to his brothers” “No blame on you today. Go, you are all free.” (Al-Albani)

Soon they all came and accepted Islam at his hands. He forgave even Hend who had caused the murder of his uncle Hamza. After killing him, she had his body mutilated and chewed his liver. When she accepted Islam, the Prophet even forgave her.

A very striking example of forgiveness we find in the Quran in reference to the most unfortunate event of “Slander of Aisha.” Some hypocrites of Madinah accused her. They tried to put dirt on her noble character.

One of the slanderers turned out to be Mistah, the cousin of Aisha’s father Abu Bakr. Abu Bakr used to give financial help to this young man. After he slandered his daughter, Abu Bakr vowed not to help him anymore. But God reminded Abu Bakr and through him all the Believers:

{Let not those among you who are endued with grace and amplitude of means resolve by oath against helping their kinsmen, those in want and those who migrated in the path of God. Let them forgive and overlook. Do you not wish that God should also forgive you. Indeed God is Oft-Forgiving, Most Merciful} (An-Nur 24: 22)

Abu Bakr  came out of his home and said: “Yes, indeed, I do want God’s forgiveness. He did not only continue to help him but he increased his allowance.

Islam emphasizes justice and punishment of the wrong doers, but it equally strongly emphasizes mercy, kindness and love. Justice, law and order are necessary for the maintenance of a social order, but there is also a need for forgiveness to heal the wounds and to restore good relations between the people.

We must keep in mind that as much as we need God’s forgiveness for our own sins and mistakes, we must also practice forgiveness towards those who do wrong to us.