Both prayers have equal parts praise for God and supplication to God. The final sentiment in both prayers is that of guidance for the one who says the prayer.
aaa

Something that many non-Muslims don’t know about Islam is that its core beliefs lead Muslims to prophets of Old and to Scripture of other faiths. This is because Islam is not a new religion separate from the teachings of Jesus and Abraham. It is a completion of God’s message to human kind. The same massage about God’s oneness was sent to every true prophet throughout human history.

The fourth pillar of faith in Islam is the belief in the books of Allah. This means that in order for one to consider him or herself a Muslim, she/he must believe that at the time the Torah, The Psalms, the Gospel, and the Quran were sent down, they truly were a message from Allah (God in Arabic).

But throughout history, man rewrote and corrupted these books. The only book left uncorrupted in its original language is the Quran, which was revealed to the last Prophet, Muhammad (peace be upon him), sent by God to all of humankind.

But what is left today of these former revealed books? Are there any remnants of the original message from God in these texts? If we take a look at the chapter of the Quran (Surah al-Fatihah) said in the Islamic prayer and the Lord’s Pray in Christianity, we find striking similarities.

These similarities lead us back to the original message with which God sent Abraham, Jesus, and Muhammad (and all the true prophets, peace be upon them all).

Our Father who art in heaven, hallowed be your name. Your kingdom come. Your will be done, on earth as it is in heaven. Give us this day our daily bread. And forgive us our sins, as we forgive those who trespass against us. And bring us not into temptation, but deliver us from evil.

Who is The Lord

In both the Lord’s Prayer and Al-Fatihah, God’s name is praised. In the Gospel prayer, God’s very name is hallowed or honored as holy, praised. In Islam, it is taught that God has many names that describe His superlative attributes. Allah himself says in the Quran:

{He is Allah, the Creator, the Inventor, the Fashioner; to Him belong the best names. Whatever is in the heavens and earth is exalting Him. And He is the Exalted in Might, the Wise.} (Quran 59:24)

In the Fatihah, the prayer itself is said in God’s name and His hallowed names are mentioned: The Entirely Merciful, The Especially Merciful. And it is to God, all praise is due.

Similarly, God’s Will is mentioned in both prayers. The Gospel prayer reads:

“Your kingdom come. Your will be done, on earth as it is in heaven”.

This segment of the prayer speaks to life on this earth and in the hereafter. It claims that God’s will is done, rules over all, is sovereign and above our own will here on earth and in the next life, where we will meet God’s judgment and final will.

This mirrors the phrase mentioned in The Fatihah: {Sovereign of the Day of Recompense}, which alludes to life here on earth and how it relates to God’s will and the final judgment.

Both prayers refer to the Belief in God’s will and sovereignty and all that implies for our lives here on earth.

The Fatihah testament: {You alone we worship and You alone we ask for help} correlates to the Mark’s Gospel’s supplication, “Give us this day our daily bread. And forgive us our sins, as we forgive those who trespass against us” in an interesting way.

The Gospel prayer directly asks for help needed in both this life and in the hereafter by naming bread and forgiveness of sins. These are the two kinds of help we are in desperate need of as human creations of God: provision (of which bread is a symbol) and forgiveness.

It is through these two corollary conceptions: provision and forgiveness (both forms of help) that we know where our worship should be directed. Why would we worship a part of the creation who could never help us without God the Creator’s permission?

This correlation of help and worship is demonstrated many times in the Quran and especially through the stories of Abraham (Ibrahim):

And therefore, in al-Fatihah we say: 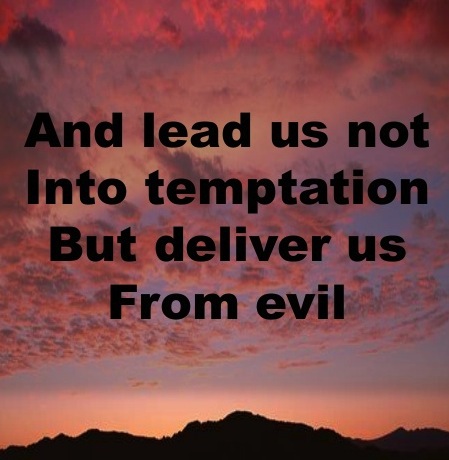 Both prayers have equal parts praise for God and supplication to God. The final sentiment in both prayers is that of guidance for the one who says the prayer.

{Guide us to the straight path}.

“And bring us not into temptation, but deliver us from evil”.

In the Gospel prayer, the mention of what it is one should wish to avoid: temptation and evil, also implies what it is that is sought: a path that leads to all that is good. As God is Good and the owner of good, this path is a straight path to God, as al-Fatihah mentions.

In these segments of the prayers, both point to the fact that human existence has direction, that we are lead one way or another. And one avenue is better than all others. In these similarities, we can find our ultimate goal—to attain God’s mercy and pleasure

It is surprising what is missing from the Lord’s Prayer. What is considered by many Christians to be the most important prayer of Christianity doesn’t mention worship of Jesus (peace be upon him). What comes before the Lord’s prayer in Marks’ Gospel mentions that Jesus is telling his followers: “Then this is how you should pray”. This was what Jesus prayed. This was what his followers prayed.

Neither Jesus nor his followers prayed to Jesus himself. They followed Jesus’ example and prayed to God, the Creator, the all Praiseworthy, the One whose will is done. They sought help and guidance and directed worship to God alone.

What we know from the Last message of God to mankind in the Quran is that Jesus came with the same message that all prophets came with: worship God alone without partners and follow the example of the best of humankind: the prophets.

The Lord’s prayers and its similarity to al-Faithah bear witness to this fact.