All knowledge as per the Quranic worldview is important, for it all brings man closer to his Creator and Master
aaa

Knowledge is the best asset one can have.

The righteous scholars are the witnesses of the truth and Allah’s Oneness. They know that true knowledge and fear of Allah could be attained only by reading and grasping Allah’s signs (ayat) in the Quran and the universe (Fatir, 35: 28).

All knowledge as per the Quranic worldview is important, for it all brings man closer to his Creator and Master, and facilitates the fulfillment of his honorable vicegerency mission on earth.

Being knowledgeable makes the people progressive, visionary, devout and morally strong. It makes them “human”, above all.

It makes them true sons of Adam, for they keep his knowledge legacy alive for the benefit of all creatures and in both worlds. It likewise makes them true followers of Muhammad, for they deeply respect, explore and act upon the signs (ayat) of the two revelations: the revealed Book and the created, or ontological, “book”.

That said, being ignorant – as per the Quranic assessment – is unnatural, abnormal, suicidal and plain un-Islamic.

Nonetheless, due to the vastness of the realm of knowledge, some types and segments are more important than others. Some could be categorized as obligatory, others as recommended, and yet others as just permissible. Some also could be classified as individual, and others as collective responsibility.

Needless to say that the best of all branches of knowledge are the sciences of Islamic shari’ah with which a person learns about his Creator and Lord, his Messenger, his Quran and his religion, specifically such religious injunctions, themes and principles as needed for a person’s everyday functioning as an exemplary Muslim.

This knowledge ought to serve as the foundation of all other branches of knowledge and must be acquired by all Muslims. It should constitute the core of all Muslim basic or advanced integrative educational systems and programs, which are supposed to neglect no segment of human existence (life mission), nor to treat some of them at the expense of the others.

Knowledge (‘ilm) is a generic term that cannot be separated and compartmentalized along the religious or secular lines. In Islam, everything to various degrees is spiritually loaded. There is nothing that is in vain, totally irrelevant and purposeless. 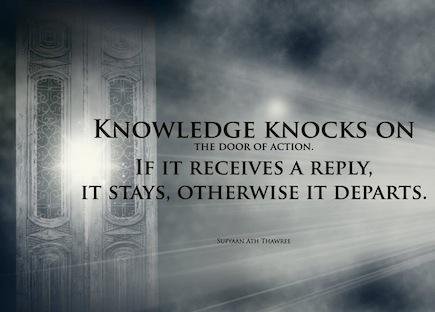 Islam is life, and life, as perceived and planned by its Creator and Planner and the Creator and Planner of humanity and human destinies, is Islam. In Islam, there is only the truth and falsehood, light and darkness, as well as knowledge and ignorance.

In the same way, ‘alim, or scholar, is a person who knows, or has mastered a field of knowledge, and in that capacity of his functions and supports the truth and its many ways, regardless of a life field in which he excels.

Reducing the concepts of ‘ilm and ‘alim, especially in their Arabized forms, exclusively to religious circles is a sign of a serious Muslim civilizational degeneration.

Both ‘ilm and ‘alim need be used equally in all the domains of both religion and non-religion, and of both art and science.

Religion and religious studies cannot monopolize the terms. Doing so is grossly unfair, and only perpetuates the cultural and civilizational predicaments Muslims are currently in.

When a person passes away and he is placed in his grave, he will be asked by two angels what he used to believe in in this world, who was his Lord, what was his religion, and who was his prophet (Sunan Abi Dawud).

The answers will entail as much faith and deeds, as knowledge. That synthesis unambiguously tells how, to what extent and for which ideals and standards a person should live in this world and should follow Islam, a comprehensive worldview and lifestyle.

He should completely surrender his being and identity to the Will and Word of his Creator and Master. That is why Islam is so called, meaning “submission”.

At last, ihsan (excellence in worship) indicates the highest station in one’s spiritual development. It, nonetheless, at the same time, verifies the strength of an alliance between knowledge and piety. The Prophet described ihsan as:

“Worshiping Allah as if you can see Him, and although you cannot see Him, He can see you” (Sahih Muslim).

Indeed, such an exceptional state could be achieved and sustained only by such as have exemplified both the poles of knowledge and spirituality.

It is on account of this that Islam like no other opposes ignorance, blind following even in sheer religious matters, deliberate mediocrity, intellectual stupor, narrow-mindedness, and deadening formalism.