The effects of the Jinn are not just limited to fortune-tellers. Other activities such as Ouija boards and séances, which are used to contact the dead, are manipulated by the Jinn.
aaa

Occult Activities of the Jinn

Through their powers of flying and invisibility, the Jinn are the chief component in occult activities.  Voodoo, Black magic, Poltergeists, Witchcraft and Mediums can all be explained through the world of the Jinn.  Likewise, so can the illusions and feats of magicians.

Because the Jinn can traverse huge distances over a matter of seconds, their value to magicians is great.  In return for helping them in their magic, the Jinns often ask the magicians to worship them and Satan.  Thus the magicians take the Jinn and Satan as lords besides God.

In our day, some of the feats performed by magicians and entertainers are without doubt from the assistance of the Jinn.  Making the Statue of Liberty disappear, flying across the Grand Canyon and retrieving a ship from the Bermuda Triangle, have all been done by the Jewish magician David Copperfield.

There is NO way that a man could do such things without the assistance of the Jinn.  It would not be surprising therefore, if David Copperfield had sold his soul to Satan himself.

One of the most frequent activities associated with the Jinn, is fortune telling.  Before the advent of the Prophet Muhammad, fortune-tellers and soothsayers were wide spread.  These people would use their associates from the Jinn to find out about the future.

The Jinns would go to the lowest heaven and listen to the Angels conversing amongst themselves about events of the Future which they heard from God.  The Jinns would then inform the fortune-tellers.  This is why before the time of the Prophet many fortune-tellers were very accurate in their predictions.  However, upon the Prophet’s arrival the heavens were guarded intensely by the Angels, and any Jinn who tried to listen was attacked by meteors (shooting stars):

And We have guarded it (the heavens) from every accursed devil, except one who is able to snatch a hearing and he is pursued by a brightly burning flame. (Quran 15:17-18)

They (the Jinn) would pass the information back down until it reaches the lips of a magician or fortune-teller sometimes a meteor would overtake them before they could pass it on.  If they passed it on before being struck, they would add to it a hundred lies” (Al-Bukhari).

Fortune-tellers also operate through the Qareen. The Qareen is the Jinn companion which is assigned to every human being.  It is this Jinn which whispers to our base desires and constantly tries to divert us from righteousness.

Every one of you has been assigned a companion from the Jinn.

The companions asked: Even you O’ Messenger of God?

And the Prophet replied:

Even me, except that God has helped me against him and he has become a Muslim.  Now he only tells me to do good (Muslim).

Because the Qareen is with a person all his life, it knows all that has happened to the person from the cradle to the grave.  By making contact with the Qareen, the fortune-teller is thus able to make out that it is he who knows about the person.  He looks in his crystal ball or the palm of a person and proceeds to amaze him with knowledge which no one else knows.  The severity of going to a fortune-teller is such that the Prophet said:

The prayer of one who approaches a fortune-teller and asks him about anything, will not be accepted for forty days or nights” (Muslim)

Whosoever approaches a fortune-teller and believes in what he says, has disbelieved in what was revealed to Muhammad.

The effects of the Jinn are not just limited to fortune-tellers.  Other activities such as Ouija boards and séances, which are used to contact the dead, are manipulated by the Jinn.  ‘Are you there Charlie?  Speak to us Charlie!!’  are the sort of words spoken by anxious relatives (names are obviously different!) seeking to make contact with their loved ones.  And it is when the Jinn starts to talk and communicate as ‘Charlie’, that the people are truly fooled.

One of the biggest manipulations of the Jinn is through visions. Through these visions the Jinns are more likely to lead people away from the worship of God than any other way.  When a person sees a vision in front of his eyes it is something which is very hard to explain away.

Only by having knowledge of the world of the Jinn and conviction in God, can a person fight such a trial.  The countless numbers of visions of Jesus Christ and the Virgin Mary over the centuries has been a popular choice for the devils.  It almost seems as if leading Christians astray is the easiest trick for the Jinns!

Not only are Christians fooled by these visions, but often the Jinns possess and begin to talk from their voices.  To the Christians this is known as the tongues of the Angels and thus a proof for their faith.  However, the amount of unintelligible nonsense and rubbish which is heard is a clear proof that this is in fact the tongues of the devils!

For other people, visions of their parents or relatives are commonplace.  By taking on the form of peoples’ parents, the Jinns can convince people that the souls of dead people still mix with the people of the earth.  This is why so many people believe in ghosts.

The onslaught of satanic visions has also hit the Muslims.  Many Muslims claim to have seen visions of the Prophet Muhammad and even God!  By doing this, Satan is able to lead astray the weak Muslims. 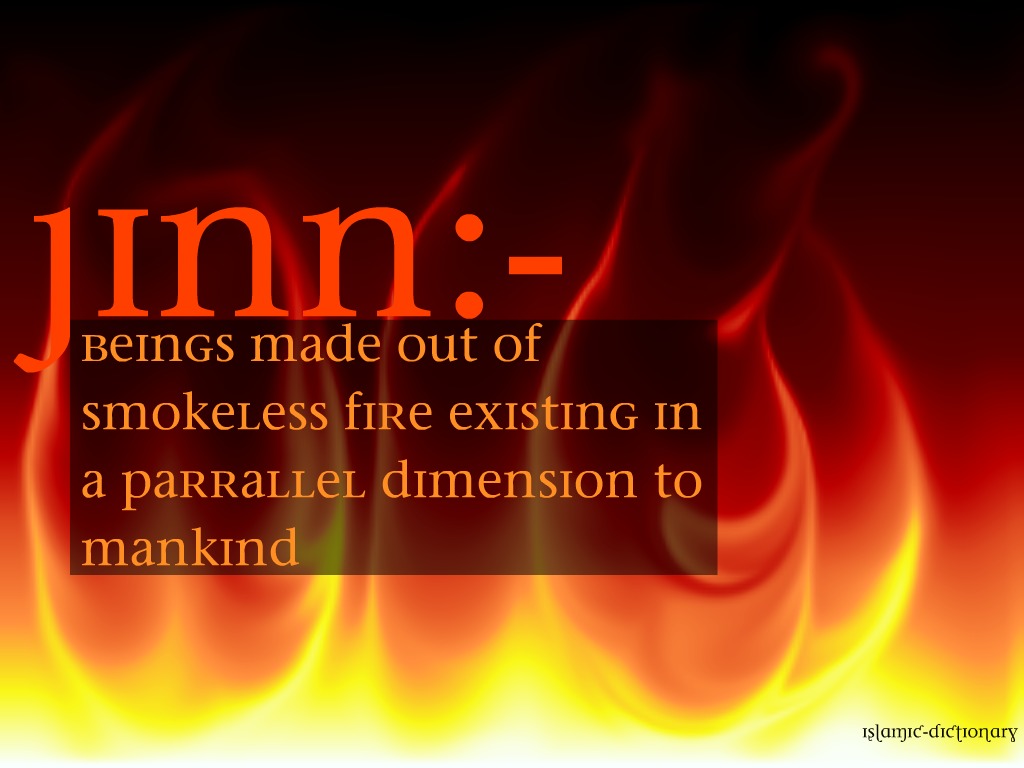 Through such visions, Muslims are often told that the commands of Islam are not applicable to them.  The Jinns tell them that Prayer, Fasting, Hajj etc. are not obligatory for them.  It is a great deception and unfortunately one which has been very effective.  The extent of satanic visions still continues to this day.

Protection from the Jinn

Because the Jinn can see us while we cannot see them, the Prophet Muhammad taught us many ways to protect ourselves from their harm, such as seeking refuge in Allah (God) from the accursed Satan, reciting chapters 113 and 114 of the Holy Quran, and reciting the words taught by God in the Quran:

Saying Bismillah (in the Name of Allah (God)) before entering one’s home, before eating or drinking, and before having intercourse will also keep Satan from entering the house or partaking with a person in his food, drink and sexual activity. Similarly, mentioning the name of Allah before entering the toilet or taking off one’s clothes will prevent the Jinn from seeing a person’s private parts or harming him, as the Prophet said.  Strength of faith and religion in general will also prevent the Jinn from harming a person.

Reciting Al-Kursi verse in Arabic (Quran 2:255) provides also a strong protection against the Jinn, as we learned from the story of Abu Hurairah (one of Muhammad’s companions) with a devil.

Do not make your houses like graves, for Satan runs away from a house in which al-Baqarah chapter [chapter 2] is recited. (Narrated by Saheeh Muslim)

The world of the Jinn is one which is both sinister and intriguing.  By knowing of this world we can explain many of the mysteries and issues which bother us.  By doing this we can avoid the extremes which the people have gone to; nothing being more extreme than worshipping others besides God.  By learning the monotheism of God, we defend ourselves from these hidden allies of Satan:

Indeed he (Satan) and his tribe watch you from a position where you cannot see them. (Quran 7:27)