Running out of time. That is when the human mind prioritizes tasks and cuts the fluff. When a person realizes his biological clock is at its last ticks, what does he prioritize? Out of the many activities of life, God singles out just one that some will choose:

My Lord, if only You would delay me for a brief term so I would give charity and be among the righteous. (Quran 63:10)

People on the Day of Judgment will ask for a second chance at life. After living a life of evil deeds, they will witness the benefit of living a life according to God’s revelation. The doers of good will be radiant with joy, looking forward to entering Paradise. The doers of evil will be fearful, anxious for a way to avoid entering the Hellfire.

If you could but see when the criminals are hanging their heads before their Lord, [saying], ‘Our Lord, we have seen and heard, so return us [to the world]; we will work righteousness. Indeed, we are [now] certain.’ (Quran 32:12)

But these people will realize the benefit of good deeds after death.

The person requesting more time at the pangs of death did not have to witness the Day of Judgment to understand the benefit of good deeds, especially charity. He understood the value of giving charity. His only problem was procrastination. Unfortunately, the inconvenient truth is that a delay is not possible:

But never will God delay a soul when its time has come. And God is Acquainted with what you do. (Quran 63:11)

Requesting for time, the person didn’t ask for one more visit to his favorite resort. No, nothing from the material world at all. Interestingly, he didn’t even ask to make one more prayer (salah) or recite the Quran. The only deed on his mind was an opportunity for giving charity. But why charity? Here are the reasons.

God offered a Trust to His creation. The trust was to be given free-will. As recipients of free-will, creation was to show their trust in God by complying, willingly, with His instructions. The heavens, the earth, and the mountains all refused to accept this Trust. Man, however, accepted to take it on.

Indeed, we offered the Trust to the heavens and the earth and the mountains, and they declined to bear it and feared it; but man [undertook to] bear it. Indeed, he was unjust and ignorant. (Quran 33:72)

As a result, God sent man guidance on what is beneficial and harmful. However, due to man’s finite nature, some of these instructions baffle many. Some opt to reject what they cannot fully grasp. Some refuse to trust – or believe – in God’s instructions if they cannot prove its validity in a laboratory. Some even ridicule God’s instructions, believing they know better. Anyhow, a few do trust in God and do follow His revelation.

Within the charter of Trust, lies a commandment that is fully built on trust. It is the commandment to give charity (sadaqah):

And spend [in the way of God ] from what We have provided you before death approaches one of you and he says, “My Lord, if only You would delay me for a brief term so I would give charity and be among the righteous.” (Quran 63:10) 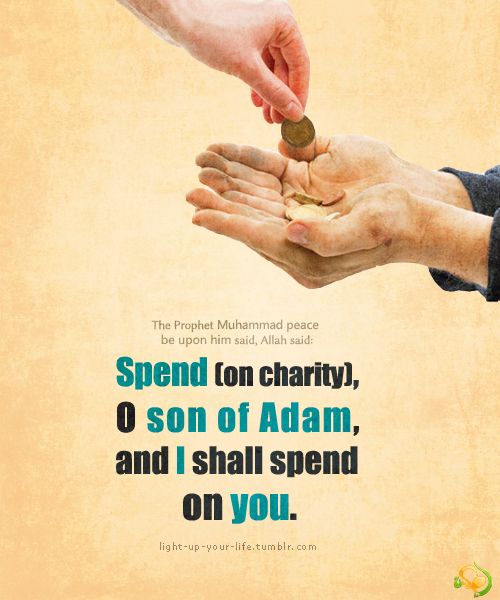 God promises to replace any charity a person may give with an equal amount in return, and more.

But whatever thing you spend [in His cause] – He will compensate it; and He is the best of providers. (Quran 34:39)

The example of those who spend their wealth in the way of God is like a seed [of grain] which grows seven spikes; in each spike is a hundred grains. And God multiplies [His reward] for whom He wills. And Allah is all-Encompassing and Knowing. (Quran 2:261)

Sadaqah (charity) is an Arabic word that comes from the verb “to trust”: sa-da-qa. If God guarantees to replace charity with more, what then holds a person back from giving charity? The weakness of trust in God.

As death approaches, the person comes to the hard realization that all his wealth will remain behind without him. After a few moments, he will not be able to cut a single check. What will happen to all his wealth? Will it be squandered, used for evil, or for good? That is unknown.

The opportunity cost of not spending his wealth in charity, up to one-third as legally allowed by the shariah, is very high. He is guaranteed rewards for his charity, but there’s no guarantee what will happen when others spend the wealth.

At his deathbed, a person could request an extension for life to make an additional prayer (salah), but the Quran mentions charity instead. When time is running out, the choice matters. The performance of salah will be recorded as a good deed– and it ends there. Charity, however, has the potential of becoming continuous (jariyah).

If a person gives charity to a mosque, for an example, he will receive the reward for every person that comes to pray, recite Quran, teach, etc. as long as the mosque exists. While the performance of salah ends at a person’s taslim (salutation to end the prayer), the rewards of the continuous charity continue even after his death. That is a wise choice and investment.

Giving charity is a proof. (Muslim)

It is a proof of a person’s trust in God and faith. People risk making business investments in the thousands of dollars hoping for a profitable return. These investments do not come with guarantees. However, the returns for spending in charity are guaranteed. The only question is, do we trust in God?