If someone spread false rumors about your loved ones, would you be able to forgive and forget?
aaa

As human beings, each of us has an inherent tendency to deviate from the straight path to do stupid things, awkward things. Not a day passes when a person can be certain that “today I have made no mistakes.”

At times we are oblivious of the fact that we are doing wrong; and at times we consciously and deliberately do things we know we ought not to. These wrongs may cause agony to others or even bring physical pain and suffering to them.

As rational beings endowed with the freedom of choice, we are responsible for our actions and are answerable before Allah (God) the Almighty. For this reason, we are constantly in need of Allah’s forgiveness.

Allah tells us in the Quran, which Muslims believe is the word of God, that He is the Most Forgiving, the Most Merciful. Allah has a number of names that imply different aspect of His Forgiving nature. He is called Al-Ghafur (the Most Forgiving) and Al-Afuww (the One Who heals and restores our honor).

He is also called Al-Tawwab (the Acceptor of repentance). This word has the sense of “oft-returning”, which implies that Allah accepts our repentance again and again.

We make mistakes and when we become conscious of it, we repent to Allah, and Allah accepts our repentance. Then again, we do wrong and repent to Him, seeking His forgiveness, and He forgives.

Allah is called Al-Rahman and Al-Raheem too, which mean “the All-Merciful” and “the All-Compassionate” respectively. The two words indicate that Allah is ever merciful to all of His creations, and most particularly to His obedient servants. Indeed Allah’s mercy is unbounded and His love is infinite.

The Prophet (peace be upon him) used to pray:

O Allah, You are the All-Forgiving One, You love to forgive, so forgive me. (At-Tirmidhi)

Without exception, all of us badly need Allah’s mercy and forgiveness all the time.

Allah, in the Quran, teaches us that we humans should strive our utmost in cultivating within ourselves the qualities of mercy and forgiveness. The Prophet Muhammad has taught us:

Allah is merciful with those who show mercy to others. (Al-Bukhari)

There were several events in the life of the Prophet Muhammad that demonstrate how merciful and forgiving he was even to his enemies. For instance, on his return to the city of Makkah after his victory, the Prophet was face to face with his brutal persecutors who fought him for many years, and murdered many of his followers.

Now he had full power and his enemies were at his feet, pleading for mercy. Making that moment a historic one unparalleled in history, Prophet Muhammad told them simply:

No blame on you today. Go, you are all free. (Ibn Hisham)

The Prophet’s exemplary character left a deep impression on his companions. No one exemplified the gentleness and the generosity of the Prophet in life more than his closest companion, Abu Bakr Al-Siddiq.

The name “Al-Siddiq” is actually a title that was given to him by Prophet Muhammad which means “the always truthful”. It was Abu Bakr who was the foremost in standing steadfast beside the Prophet on all those occasions when others of less caliber faltered.

Abu Bakr was the very embodiment of magnanimity, nobility, and grace. He was one of the first to declare his allegiance to the Prophet, and from that moment on, nothing deterred him from the path of Islam, and no one was closer to the Prophet than him. 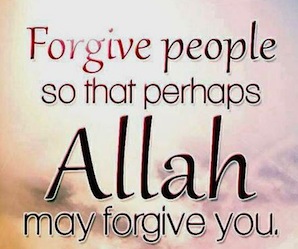 Indeed, Abu Bakr was the first rich man in history who bought slaves just to give them freedom.

Lady Aishah, the wife of the Prophet, was the beloved daughter of Abu Bakr. This relationship was a bond that brought him close to the Prophet Muhammad. There was an incident concerning Aishah that upset Abu Bakr and brought him great sorrow.

The Incident of the Slander

The story is told in the biography of Prophet Muhammad and is usually referred to as the “incident of the slander.”

It all began when Aisha accompanied Prophet Muhammad in one of his campaigns, and while returning, she happened to lag behind the caravan owing to her preoccupation with the search for a necklace she had lost in the desert.

This detained her while the caravan continued the journey, believing that Aishah was with them. When she came back to the camping place she found no one; she had no option but to remain there in the hope that her people would notice she was not with them and come back looking for her.

A man named Safwan, was riding behind the army and he happened to see Aishah. He let her ride on his camel while he led them on foot to the caravan that was at the next halt.