Without fake justifications, it becomes difficult for sinister plots to gain traction.
aaa

They were some place near the ka’bah. Probably, in front of its door. Their hands clung to the cotton cloth that draped over it. Years ago, they saw birds appearing from nowhere dropping stones from the sky, obliterating the invaders who were determined to destroy this place. They were standing on sacred ground.

Holding on to that cloth in front of the ka’bah, the pagans felt that this was the closest they could get to Allah, who they believed to be one of their gods. They supplicated, “O Allah give victory to the troops, the more guided, the more honorable, the better of the two tribes.”

The Battle of Badr was on the horizon. The pagans could not tolerate the Muslims, whom they had persecuted and expelled from Makkah, owning territorial rights over Madinah and its surroundings. Trade was a lifeline for Makkah and they could not afford to endanger their trade routes that passed by Madinah. To preserve them, they needed to continue their mission of putting an end to the Muslims.

They turned to Allah, wanting Him to judge between them through the battle. A decisive victory, which they imagined was certain, would show that they were right and the Muslims were nothing but troublemakers. After supplicating at the kab’ah, they marched out towards Madinah with full force, outnumbering the Muslims 3 to 1.

The battle ensued. The Muslims were able to defend themselves at Badr and prevent a potential onslaught on their new home, Madinah. The pagans didn’t just lose the battle, they also lost their influential leaders. Once back in Makkah, they wasted no time to ignite the flames of revenge for another Battle.

{If you are seeking a decision, then a decision has already come to you. And if you desist [from hostilities], it is best for you; but if you return [to war], We will return, and never will you be availed by your [large] company at all, even if it should increase; and [that is] because Allah is with the believers.} (Quran 8:19)

The pagans, however, refused to accept the outcome. Instead, they propagated an alternate reality: they were the victims due to the casualties they suffered at the Battle of Badr. This propaganda, or fake news, enabled them to muster up support for another attack on the Muslims.

Horrible as it may seem, creating fake news to justify aggression and wrongdoing has been a common tactic. Take, for instance, the example in the Quran of those who killed Prophets in the past. Their murders were committed, as Allah described them, “without right”:

{That was because they [repeatedly] disbelieved in the signs of Allah and killed the prophets without right.} (Quran 2:61)

But, can killing Prophets, sinless and righteous people, ever be done with justification? Never. So why mention “without right”?

The murderers, in their twisted view, claimed that they had justification for their horrendous killings. “Without right” countered that view and set the record straight by declaring that absolutely no valid justification existed. 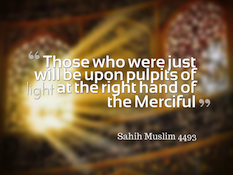 Out of the 7 categories of people that will stand under the shade of Allah on the Day of Judgment, the first of them to be mentioned in the hadith of the Prophet is the “just ruler” (Al-Bukhari). These rulers chose not to use their power and influence to manufacture fake justifications. Justness prevented these rulers from using their positions wrongfully. As a result, a great reward is granted to them for the great damage they chose not to obtrude on their people.

Fake justifications are not only created by heads of state, they are also created by the employee who sues their employer for an illegitimate reason, by the spouse who abuses the other, by the business partner who usurps shares, etc.; simply because it’s possible.

The Quran puts justness and fake news head to head in one verse:

{Oh you who have believed, be persistently standing firm in justice, witnesses for Allah, even if it be against yourselves or parents and relatives. Whether one is rich or poor, Allah is more worthy of both. So follow not [personal] inclination, lest you not be just. And if you distort [your testimony] or refuse [to give it], then indeed Allah is ever, with what you do, Acquainted.} (Quran 4:135)

Justness is mentioned again in the Quran. This time it reveals the strategy for promoting fake justifications: permanently silencing those who can expose them- “those who order justice”.

{Those who disbelieve in the signs of Allah and kill the prophets without right and kill those who order justice from among the people – give them tidings of a painful punishment.} (Quran 3:21)

An amazing story of Ali ibn Abi Talib, as the head of state, takes us into his life and his understanding of being just, despite possessing power and influence.

Ali ibn Abi Talib lost his shield at the Battle of Siffin. After the battle, he returned to Kufah. There, he found that his shield was in the possession of a Jewish man who was selling it in the marketplace.

He said to him: “This shield is mine. I did not sell it nor give it away.”

The Jew said: “It is my shield and it is in my possession.”

They went to a judge named Shurayh. Shurayh said: “Speak, Oh Leader of the Believers.”

He said: “Yes. I claim the shield that is in the Jew’s hands is my shield. I did not sell it nor give it away.”

Shurayh said: “Oh Leader of the Believers, give me proof.”

He said: “Yes. Al-Hasan and Al-Husayn will bear witness that this shield is mine.”

Shurayh said: “The testimony of the son for the father does not count.”

The Jew said: “The Leader of the Believers brought me to this judge and he is ruling against him? I bear witness that this is the truth. I bear witness that there is none worthy of worship except Allah and that Muhammad is the Messenger of Allah. This is your shield. You were riding on your dusky camel, heading towards Siffin when you dropped it at night. I then picked it up.”

Ali said: “Since you admit it, it is yours”. He also added a horse in the giveaway.

Ali, who was the companion, cousin, and son-in-law of the Prophet Muhammad, was now the head of state. The State at this time had stretched all the way from Asia on one end to Africa on the other. Power and influence were at his fingertips. Yet, he refused to use his position to retrieve property that rightfully belonged to him. Instead, he subjected himself to due process against a Jew.

Fake news and justifications can be eradicated by tackling them from two angles:

The first, by verifying information, as Judge Shurayh showed us in his demand for evidence. Fake news and justifications die when proof and evidence are relentlessly demanded.

The second, by not taking advantage of roles and positions, as Ali showed us in his respect for the law and due process. Both of these angles stem from justness.