What is having fun?

To some people the most fun they ever had was a good night’s sleep (hello new mum’s!). To others, it’s a weekend in Las Vegas filled with sun, partying and reckless behavior. And to others it’s their favorite TV show, some good company or a meal out with friends.

“How do religious people have fun?!”

It doesn’t look like much fun attending the church or the mosque for prayers. Actually, as a child, I didn’t enjoy going to church, much. I found the occasion boring and often yawned throughout the service… Don’t get me wrong, I yawn when I am in the mosque too, this is human. Especially in the fast paced world we are living in.

So, without understanding, our lives look so restricted and boring. I know my own mother even thinks I am too boring for my age and constantly quotes that “life is for living.” She has a point!

We are not placed on this Earth to stand in the Mosque all day/night and Praise Allah with every second that passes. This is not Islam.

“We were in the company of Allah’s Messenger and he delivered to us a sermon and made a mention of Hell-Fire.

Then I came to my house and began to laugh with my children and sport with my wife.”

“I went out and met Abu Bakr and made a mention of that to him. Thereupon he said:

“I have done the same as you have mentioned.”

So we went to see Allah’s Messenger and said to him:

“Allah’s Messenger, Hanzala has turned to be a hypocrite.”

And he (the Holy Prophet) said Show respite. And then I narrated to him the story, and Abu Bakr said:

“I have done the same as he has done.”

Thereupon he (the Prophet) said:

Hanzala, there is a time for worldly affairs and a time for (worship and devotion), and if your state of mind is always the same as it is at the time of remembrance of Allah, the Angels would shake hands with you and would greet you on the path. (Muslim)

We are required to have balance in life. To worship Allah, and even having fun can be part of that worship. Do you know that by smiling or making another person smile is rewarded by Allah?

When I meet my friends for lunch (Muslims and Christians and even Atheists), just by following Islam, saying ‘Bismillah’ before I eat, ensuring that I am dressed appropriately and perhaps being a good friend to others is all an act of worship.

Prophet Muhammad (peace be upon him), the very best Muslim and example of a human, himself had fun. He smiled often and would make jokes with members of his community. The Prophet brought an uplifting spirit that penetrated the hearts of people.

One of the hadiths that reflects the Prophet’s sense of humor and enjoyment of fun is the report that Imam Ahmad gives:

“I went out with the Prophet on a journey. At that time I was a young girl and was quite slender. The Prophet told the people, ‘Go on ahead,’ so they went ahead, then he said to me:

Come, let us have a race.

So I raced with him, and I won. He let the matter rest until I had gained weight. Later, I accompanied him on another journey. He told the people: ‘Go on ahead,’ so they went ahead. He said to me:

So I raced with him, and he won. He began to laugh, and said:

This is for that.

Islam and Fun: How to Set Restrictions 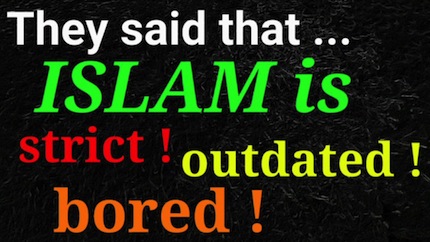 So how do ordinary Muslims have fun? Do we have to break the Laws of Allah in order to enjoy ourselves? Truthfully… No.

That’s why I prefer to follow Allah and His Messenger as much as I can. If I am not allowed to do something or participate in a particular act so be it…

“To some, Islam is nothing but a code of rules and regulations. But, to those who understand, it is a perfect vision of life.” (Yasmin Mogahed)

And the truth of the matter is, when I do break Allah’s Law. When I think back to my non Muslim days of partying, dancing with the opposite sex, going out ‘till 6:00 am or walking around in just a bikini or talking to strangers just for the thrill of it… although, I thought I was young and having fun – it’s nothing but a waste of time, health and the consequences of such ‘fun’ is never good.

I am a firm believer that you reap what you sow. It’s only a matter of time before those weekends partying affect your health or your wealth or worse, your marriage or your relationship with your family.

That’s why I prefer to live a ‘simple’ life.

To some it may be boring, to others it might even be unlivable but to me, it is a perfect way of life. I am safe, I am happy and I feel free and to me that is the best way to have fun.