Buzzed, but not quite there yet. Drinks continue to expand the blood vessels. Communication between the neurons in the brain just got slower as well. The body imbalanced, the words slurred, alcohol has entered the blood. The liver breaking up the incoming alcohol has started to produce a toxin called acetaldehyde. With a lot of it being produced, nausea is next, and so are headaches.

This is being drunk. Does it sound like Paradise? Critics wonder why the Quran claims there will be wine in Paradise. Isn’t wine prohibited in Islam?

In Islam, this life is a test; filled with choices, pressures, and temptations to evaluate who can navigate through them while being best in their actions.

This life test comes with its own rules and regulations. Avoiding alcohol is one of them. Once the test is over, the regulation is lifted and drinking is allowed in Paradise.

And they will be adorned with bracelets of silver, and their Lord will give them a purifying drink. [And it will be said], “Indeed, this is for you a reward, and your effort has been appreciated. (Quran 76:21-22)

Similar Names but not Realities

Beautiful gardens, flowing rivers, rivers of milk and honey, fruits, raised couches, mansions decked out in gold, this imagery is what a believer is expected to see in Paradise. The honey, the mansions, the gardens, the fruits, we know what they mean, but when it comes to Paradise we don’t know exactly how they are in it. The dwellers will recognize what they are based on their worldly experiences:

Whenever they are provided with a provision of fruit therefrom, they will say, “This is what we were provided with before.” And it is given to them in likeness. (Quran 2:25)

But, these fruits will be unique to them since Paradise is a place that:

…no eye has seen nor any ear has heard nor has been imagined by any human. (Al-Bukhari)

“There is nothing in Paradise that exists in the world except by name.”

There will be circulated among them a cup [of wine] from a flowing spring, white and delicious to the drinkers. No bad effect is there in it, nor from it will they be intoxicated. (Quran 37:45-47)

To claim that wine should not exist in Paradise simply because it is prohibited in this world would be a sweeping generalization.

Dwellers of Paradise enjoy peak pleasures through this ability:

They will have whatever they wish therein. (Quran 50:35)

Wine will be brought simply by a wish. The wishes are unlimited, since the abode is eternal, but are the wishes for anything? Yes and no. Can a person wish to murder his neighbor or usurp his friend’s mansion? Will Allah grant those wishes? 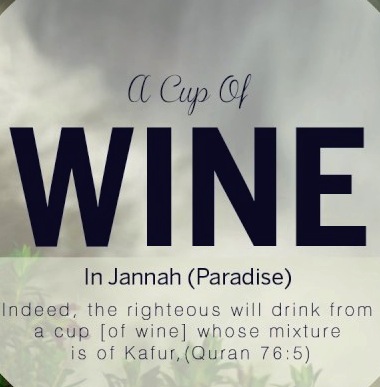 Understanding what we wish for and want is not that straightforward. We at times want some things so badly and at other times want nothing to do with those exact same things.

Take for example a very hungry person who happened to stop by the local supermarket to get groceries before going home. His grocery bill will most likely be much higher than normal because he will feel like eating almost anything he sees in the aisles, especially junk food for some reason.

After a heavy and satisfying dinner, however, he may not even want to look at food anymore, let alone have another bite. His wishes and wants have changed in a matter of hours. Our disposition has a direct effect on what we want and when we want it.

The answer is not a simple “no”, but rather: the felicitous wishes of the Paradise dweller would never have murder as one of them. The pleasurable disposition of Paradise will prevent the dweller from negative feelings, eternally. They become an impossibility.

And We will provide them with fruit and meat from whatever they desire. They will exchange with one another a cup [of wine] wherein [results] no ill speech or commission of sin. (Quran 52:22-23)

If drinking wine is considered a sin in this world, does the previous verse negate wine drinking in Paradise since it says there will be “no ill speech or commission of sin”?

The sin that is negated in Paradise, thus becoming an impossibility, is anything that would disturb the joy and peace of Paradise. Slander, lies, oppression, murder, war, envy, would all be ruled out as a result.

Wine drinking, wearing silk for men, using gold and silver utensils– all prohibited actions in this world, will not be categorized as sin in Paradise since they do not disrupt the pleasures of Paradise.

The existence of wine in Paradise does not contradict the prohibition of drinking wine in this world. Paradise and this world are two different dispositions with two distinct products and experiences.

Wine drinking in Paradise does not cause intoxication which leads to dangerous and regrettable behavior, headaches, and nausea. Instead, the drinking experience in Paradise is pure and pleasurable without any negative side-effects.

This delayed gratification is granted to the believers as a promise as stated by the Prophet:

Certainly, you will never leave off something for Allah except that He will replace it with something better for you. (Ahmad- Sahih chain)