Disputing for the sake of disputing is strictly forbidden. It is on a par with obdurate ignorance. Both denote the devastating ailments of the soul.
aaa

Asking is a praiseworthy and indispensable method in the realm of seeking and applying knowledge. It is its key. Moreover, since the truth and knowledge in Islam are inseparable, yet virtually synonymous, asking is generally as important in the realm of the truth.

Muslims are instructed not to follow anything or anybody blindly and irrationally, nor to concern themselves with anything of which they have no knowledge. They are likewise commanded, if they do not know, to ask of those who possess knowledge and the message.

A Muslim is not to act ignorantly even in the matters of the most fundamental religious tenets and injunctions. Actions must be preceded by sufficient and authentic knowledge and understanding, the threshold of which is sincere asking or questioning.

This is so because deliberate ignorance is a poison for the soul, which attacks the soul from all sides. It also actively aids other diseases, such as haughtiness, avarice and self-centeredness, aiming in unison but to corrupt and utterly destroy the soul.

If it is said that knowledge without practice is like a barren tree that yields no fruits, then, in equal measure, it could be said that practice without knowledge is hollow and perilous. Its parable is an ostentatiously beautiful and healthy tree whose produce is inedible and bitter. While the former is clearly deficient and anti-climactic, the latter is devious and outright dangerous.

Neither condition is acceptable. However, both conditions are curable by the remedies at the heart of which reside open-mindedness, self-criticism and asking honest questions, so as to restore a person’s coherent, comprehensive and positive self-identity.

Accordingly, when they were in need, even the angels and the Prophets asked Allah. They did so in order to shed more light on certain issues about which they had no sufficient knowledge. The Prophets sometimes asked simply out of curiosity, to reassure their hearts and enhance thereby their faith. In the context of his continuous asking of, or discussion with, Allah concerning the people of Prophet Lot, Prophet Ibrahim was called:

Most clement, most tender-hearted, intent upon turning to God again and again. (Hud 11: 75).

Asking remains a commendable method so long as it signifies a means to seek, absorb and apply both knowledge and the truth, and to combat ignorance and intellectual as well as spiritual indifference and mediocrity. Asking becomes objectionable when it is done for its own sake, or for the sake of pursuing any agendas that are contrary to what asking as an educational approach was intrinsically meant to be. 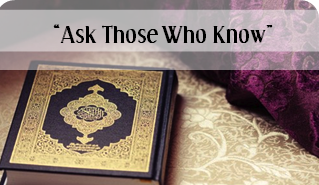 It stands to reason that where the passionate asking and discussing end, the first signs of disputing start taking over. It is due to this that a sage once said to his disciple: “When you start liking your own viewpoints and the ways you articulate them — only because they are yours, not because you are championing the truth — politely withdraw yourself from a discussion.”

Certainly, in such a code, there is no place for unjustifiable disagreements and arguments where the issue is not about teaching and learning, nor guiding and enlightening, but about excessive and often unfounded debating, striving to compete and win, and impose one side’s viewpoints on the other.

Disputing for the sake of disputing is strictly forbidden. It is on a par with obdurate ignorance. Both denote the devastating ailments of the soul.

It is little wonder, for example, that Satan (Iblis) disputed with Allah about His divine plan for Adam and the whole of mankind; that Pharaoh disputed with Prophet Musa about the truth and its manifest signs, after they had been clearly presented to him; that the Babylonian king, Nimrod, disputed with Prophet Ibrahim about Allah and His attributes, after his inflated ego and self-image had been challenged by the latter through undeniable rational, revealed and common-sensical evidence.

It follows that constructive asking, or questioning, is a key to knowledge, and even the truth. It is a trait of a true believer. It is an integral part of the epistemological and ontological laws of existence and of man’s honorable vicegerency mission on earth.

Adverse disputing, conversely, is toxic and at once blinding and deafening. It is a key to perpetual ignorance, arrogance and their numerous spiritual and mental derivatives. Allah says about such people as cultivate the habit of disputation and obstinacy that they are “in most things contentious or disputative”. It is not a chance that this comes immediately after the following words of Allah:

We have explained in detail in this Quran for the benefit of mankind every kind of similitude… (Al-Kahf 18: 54).

Such people neither want, nor can, recognize the signs of the Quran, owing to their hardened attitude.