This is a large place situated about 8 km or 5 miles from Masjid al Haram. Thousands and thousands of tents are erected here in order to provide shelter to the pilgrims during Hajj.
aaa

You will find a lot of material on the net and books on Hajj and Umrah, but so far I couldn’t find one where it explains clearly the terms which are completely unknown to a Muslim studying about them or performing them for the first time.

Usually the authors just assume that the reader knows the places they’re talking about. Therefore, my humble effort to provide a glimpse of a solution for this, so that when we go and study about Hajj and Umrah, we’re not confused by and forget so many unknown terms. In this article we’ll look at the various unfathomable names of places insha’Allah. 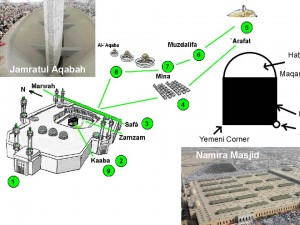 The Ka’bah is the ancient House built by Ibrahim and Ismail (peace be upon them), as mentioned in the Quran:

And [mention] when Abraham was raising the foundations of the House and [with him] Ishmael, [saying], “Our Lord, accept [this] from us. Indeed You are the Hearing, the Knowing. (2:127)

We perform tawaf around the Ka’bah, i.e. go around it seven times, starting from the Black Stone. (see figure) and going anticlockwise. Then we pray two units of prayer behind the Station of Ibrahim. After that we move to Safa and Marwah.

This is the whole boundary of the masjid in whose center the Ka’bah is situated.

We have certainly seen the turning of your face, [O Muhammad], toward the heaven, and We will surely turn you to a qiblah with which you will be pleased. So turn your face toward al-Masjid al-Haram. And wherever you [believers] are, turn your faces toward it [in prayer]. Indeed, those who have been given the Scripture well know that it is the truth from their Lord. And Allah is not unaware of what they do. (2:144)

Haram is the sacred area, inclusive of the Ka’bah and its surrounding areas, and also Mina and Muzdalifah, where it’s ‘haram’ to do certain acts, such as cutting trees or even tearing leaves.

(See the diagram under ‘Masjid al Haram’) These are two mountains, between which Hajar, the wife of Prophet Ibrahim, went to and fro in search of water for her thirsty baby Ismail, in consequence of which the Zamzam well was created.

Indeed, as-Safa and al-Marwah are among the symbols of Allah . So whoever makes Hajj to the House or performs ‘umrah – there is no blame upon him for walking between them. And whoever volunteers good – then indeed, Allah is appreciative and Knowing. (2:158)

We walk between these two mountains seven times. This is called Sa’i. 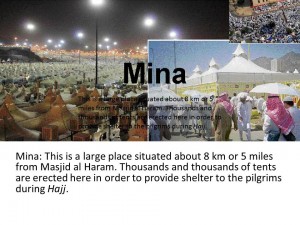 This is a large place situated about 8 km or 5 miles from Masjid al Haram. Thousands and thousands of tents are erected here in order to provide shelter to the pilgrims during Hajj.

Arafat is a place situated 14.4 km or 9 miles from Mina. We stand here at a particular date (9th of Dhul Hijjah). The imam gives a khutbah specially on this day, and after praying combined Dhuhr and Asr prayers shortened, we make as much dua as we can, since the Prophet (peace be upon him) said:

The best dua is dua on the day of Arafah. (Muwatta’)

Standing at Arafat is a pillar of Hajj, i.e. without it Hajj is invalid. That’s why the Prophet (peace be upon him) said: 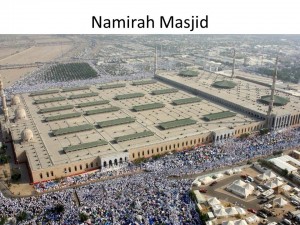 This is a place in Arafat where a large masjid has been built.

“I was with my father at the plains of Namirah. I passed by a mount and saw Allah’s Messenger standing in Salat.”

I was looking at the earthiness of his armpits when he prostrated. [That is]: “Whiteness.” (At Tirmidhi)

This place is situated halfway between Mina and Arafat. After Maghrib time comes, we go from Arafat to Muzdalifah, and we pray combined Maghrib and Isha prayer in Qasr there.

The Jamaraat are three big pillars, erected beside Mina. These are symbols of Allah, and we stone them as a resolution to confront all our enemies, the Shayateen.

Jamratul Aqaba is the largest Jamrah. We stone only this Jamrah on the day of Eid. The following two days we also stone along with it Jamratul Wusta (Medium Jamrah) and Jamratul Sugra (Smallest Jamrah).

I hope and pray that after reading this, some concepts have been cleared about the various places we need to know and understand for Hajj and Umrah.