It is important to note that the Quran is not a book of science, but that it is consistent with science.
aaa

The Quran uses imagery to covey its deep meanings, here it describes the state of the unbelievers as:

A human being can dive no more than 70 meters without breathing equipment.  Light is present at that depth, but if we go down 1000 meters it is completely dark[7].  1400 years ago there were no submarines or specialist equipment to discover internal waves or the darkness deep inside the oceans.

There was a cruel oppressive tribal leader named Abu Jahl who lived during the time of Prophet Muhammad (peace be upon him). God revealed a verse of the Quran to warn him:

God does not call this person a liar, but calls his forehead (the front part of the brain) ‘lying’ and ‘sinful’, and warns him to stop.

This verse is significant for two reasons.  The first is that the front part of our brain is responsible for voluntary movement[8]. This is known as the frontal lobe. 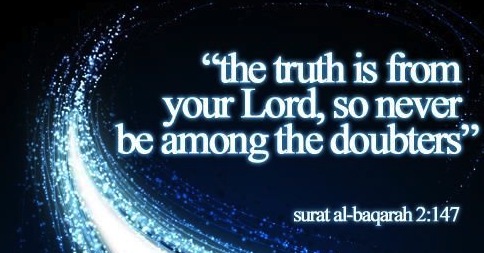 A book titled ‘Essentials of Anatomy and Physiology’ which includes the results of research on the functions of this area states: The motivation and the foresight to plan and initiate movements occur in the anterior portion of the frontal lobes, the prefrontal area[9].

The part of the brain that is responsible for movement is said to be seized if the man does not stop.

Secondly, numerous studies have shown that this same region (frontal lobe) is responsible for the lying function of the brain[10].  One such study at the University of Pennsylvania in which volunteers were asked questions during a computerized interrogation, it was found that when the volunteers were lying there was significantly increased activity in the prefrontal and premotor cortices (frontal lobe region)[11].

The front part of the brain is responsible for movement and lying.  The Quran links movement and lying to this area.  These functions of the frontal lobe were discovered with medical imaging equipment which was developed in the 20th century.

For a long time it was thought that the sense of feeling and pain was dependent on the brain.  However it has been discovered that there are pain receptors present in the skin[12].  Without these pain receptors, a person would not be able to feel pain.

Consider the following verse on pain:

{We shall send those who reject Our revelations to the (Hell) Fire.  When their skins have been burned away, We shall replace them with new ones so that they may continue to feel the pain: God is Almighty, All-Wise.} (Quran 4:56)

God tells the people who reject his message that when they are in Hell and their skins are burnt off (so they can’t feel any pain), he will give them new skins so that they continue to feel the pain.

The Quran makes it clear that pain is dependent upon on the skin.  The discovery of pain receptors in the skin is a fairly recent discovery for Biology.

These are just some of the many facts found in the Quran. It is important to note that the Quran is not a book of science, but that it is consistent with science.  To claim that scientific facts in the Quran are due to coincidence would be irrational.  The best explanation is that God revealed this knowledge to the Prophet Muhammad.

Just like the Quran contains knowledge about the natural world, it also contains information about the inner dimensions of our souls.  It relates to our feelings, wants and needs.  The Quran informs us that we have a purpose in life, and that following God’s guidance will lead us to inner peace in this life, and Paradise in the hereafter.  And that rejection of his message will lead to depression in this life and Hellfire after death.

{We shall show them Our signs in the Universe and within themselves, until it becomes clear to them that this is the Truth.  Is it not enough that your Lord is the witness of all things?} (Quran 41:53)

[12] Michael Darmon, Molecular Biology of the Skin: The Keratinocyte