When we look at the behavior of some Muslims we find practices and superstitions that are actually forbidden in Islam.
aaa

In the previous two articles we discussed the fact that not all Muslims represent Islam.

Our focus was Islam’s attitude towards war, violence and terrorism. We established that Islam is a religion of peace, and that unjustifiable killing or violence is absolutely forbidden.

Sadly many Muslims around the world have sullied the name of Islam by committing acts and atrocities that have no place in a religion based on the concepts of justice and mercy.

However this is not the only way that Muslims themselves misrepresent Islam.

From the outset it is important to understand the foundation of Islam – God is one. He has no partners, no sons, daughters or helpers. He alone created, and sustains the universe. Nothing happens without His permission.

{Is there any god with Allah? High Exalted be God above all that they associate as partners (to Him)!} (27: 63)

Muslims believe this with certainty, there is no god but Allah, and they believe that the prophets and messengers were sent by God to guide humankind to the truth that God is one. Therefore, in Islam there is no room for intercession of any kind. It is God alone that Muslims worship and God alone that they ask for help, in any and all endeavors. This concept is known as tawheed and it forms the basis of the religion of Islam.

Sadly however, when we look at the behavior of some Muslims we find practices and superstitions that are actually forbidden in Islam. Sincere worship for God alone has become adulterated by the local customs and traditions, yet many Muslims are unwilling to admit that such corruption exists. The fact is not all Muslims worship in the correct way and not all Muslims are representative of Islam.

One of the gravest sins is calling on somebody or something other than God. This is forbidden in Islam, yet around the world these deeply entrenched cultural practices remain. Muslims who call on the dead to intercede for them do not represent the religion of Islam. Muslims, who believe that righteous people are able to intercede between ordinary people and God, do not represent Islam. Muslims who wear good luck charms and amulets in the belief that they can somehow ward off evil or bring good, do not represent the religion of Islam. These are direct contradictions to the oneness of God.

Corruption of worship is evident in the many myths and traditions that surround pregnancy and childbirth. Many traditions involve the use of charms spells and amulets. A Muslim however, knows that everything is from God, and that there is no luck or randomness involved. Strange superstitions can neither bring harm or good. Islam teaches that there is no power or strength except with God, it dispels these myths and superstitions thereby freeing humankind from this type of bondage. 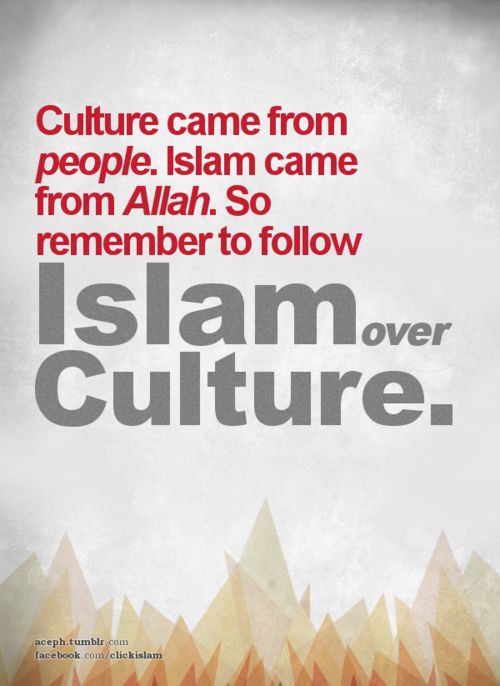 Bearing this in mind let us examine the cultural practices surrounding two fictional women. The women in these anecdotes are entirely fictional but the practices are real and form just a small part of hundreds of traditions and practices used throughout the Muslim world to ward off evil or obtain good.

In a small village outside Mogadishu in Somalia, 18 year old Nura has just given birth to her first child. A beautiful healthy boy. Nura and her family believe that the bracelet he wears made from string and herbs will protect him from the evil eye.

Most Somali people link their identity with Islam however a large number of pre-Islamic practices have survived. There is a strong belief in jinn (devil) possession and zar (a cult in which women are willingly possessed) and most Bedouin Somalis routinely wear protective amulets. Prior to Islam the belief system in Somalia was largely animist, it dates back to the Paleolithic age in which every object, be it animate or inanimate, had a soul.

These traditions and practices usually evolve around major life experiences such as birth and death and often involve the use of plants and herbs both for their medicinal properties and the belief that such plants and herbs offer protection from malevolent spirits. Thus a new born baby would be given an amulet to safeguard him from harm. This practice clearly denies the oneness of God. These are traditions that do not make sense when the true nature of God is revealed through Quran and the authentic traditions of Prophet Muhammad (peace be upon him).

Far away in Turkey in the thriving metropolis of Istanbul Ceylan’s mother and aunts are adorning the wall of the room in which she will give birth with strings of onion, garlic and blue beads. They believe that this will protect Ceylan and the newborn baby from the evil eye and evil jinn known in Turkey as the “baby snatcher”.

Amongst the strings of herbs being hung in the birthing room in Turkey you may also find blue beads. These are prevalent in many Muslim communities. People wear amulets, keep them on hand to give to guests, hang them near the doors of their homes or in their cars. The beads are usually made of glass in order to reflect any bad luck or evil and the belief is that like a mirror it draws positive energy away and reflects the bad intentions back. According to this false belief, if the evil is too strong for the blue eye to push away, it breaks and sacrifices itself.

The origin of the blue beads is difficult to trace however it is common in all countries around the Mediterranean Sea including Greece, Cyprus and Egypt. It may even date back as far as the ancient Egyptians. The eye of Horus (ancient Egyptian symbol of protection and power) may be the origin of this widespread belief, and the color blue has been used since antiquity to denote healing and protection.  Islam is clear, healing and protection is from God alone.

Corrupted worship and superstitious practices are prevalent in Muslim communities throughout the world. You may have noticed some in your own community; however they are not representative of Islam. Islam is the religion of informed knowledge, not blind belief and strange superstitions.

The power of God is Omnipotent. When Muslims behave in a manner that seems to encourage superstitions and strange behavior, they do not represent Islam.

The message of Islam is clear. There is no power or strength except with God, and Prophet Muhammad is His final Messenger.

Source: The Religion of Islam – http://www.islamreligion.com