Al-Hasan Al-Basri was a wise, eloquent man whose words were just like pearls.
aaa

He was one of the most renowned of the generation after the death of the Prophet and prominent figures of his time. He was a jurist and a scholar. He was a pious and devout person. He was famous for his eloquence, inspiring speeches, wisdom, asceticism, and deep knowledge. He is the revered tabi’ee and the scholar of the people of Basrah, Abu Sa`eed Al-Hasan Ibn Abi Al-Hasan Ibn Yasaar Al-Basri.

Al-Hasan Al-Basri was born in Al-Madinah in 21 A.H., 642 A.C. during the caliphate of the leader of the Believers, `Umar Ibn Al-Khattaab . Both his parents were slaves. His father became a prisoner of war when the Muslims conquered Misaan, an area between Basrah and Waasit in Iraq. His father embraced Islam and lived in Al-Madinah where he married a blond woman called Khayyirah who was the maid-slave of Umm Salamah, the wife of the Prophet. The Mother of the Believers, Umm Salamah freed Khayyirah after she gave birth to her son Al-Hasan.

Al-Hasan spent his early years with his family in Waadi Al-Qura nearAl-Madinah. Before he was fourteen years old, he managed to memorize the Glorious Quran. He also learnt reading, writing, and some mathematics. He heard many sayings of the Companions of the Prophet and he used to listen to the leader of the Believers, `Uthmaan Ibn `Affaan whenever he delivered the Friday sermon. Al-Hasan was fourteen years old at that time.

Moving to Basrah and Seeking Knowledge

When he was fifteen years old, Al-Hasan moved to Basrah, Iraq in 36 A.H., 656 A.C. He began learning jurisprudence, Hadeeth, and the Arabic language at the hands of a large number of the companions of the Prophet who were living in Basrah at that time. His tutor for the recitation of the Glorious Quran was Hattaan Ibn `Abdullah Ar-Riqashi while his tutor for the methodology of delivering sermons, religious speeches, and recounting religious tales, was Ibn Surayyi` At-Tameemi, the poet.

Delivering sermons and recounting religious tales appealed to Al-Hasan and he took a place in the mosque of Al-Basrah to teach people. Many story tellers back then tended to exaggerate. They were all banned from telling religious tales in the mosque of Al-Basrah except for Al-Hasan who adopted a different methodology. He used to talk about the life after death, reminding people of death, drawing their attention to the religious and moral defects they may have, and how they could overcome them according to what he had learnt from the Book of Allaah, the Sunnah of the Prophet , and the revered companions. 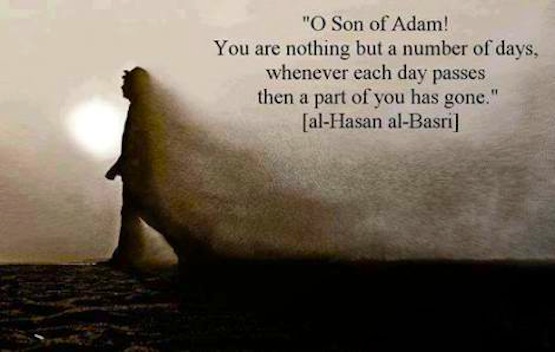 Al-Hasan Al-Basri had a large class in the mosque of Al-Basrah in which he taught people the Prophetic Hadith, jurisprudence, the Glorious Quran, the Arabic language, and rhetoric. He also conducted a special class in his house to teach people about asceticism and deliver touching speeches.

Al-Hasan was one of the most knowledgeable people on jurisprudence and the lawful and unlawful acts. He loved the religion of Allah and he was a pious man who used to refrain from committing any illegal act. He adhered to the straight path in all his affairs. He shouldered the responsibility of guiding and advising people to save his society from the deviations and aberrations that were beginning to prevail. Al-Hasan Al-Basri adopted the doctrine of the companions.  He was their student and he had the pleasure of accompanying them. He was influenced by their methodology and he steered their course.

Al-Hasan Al-Basri used to frequently advise the rulers and governors and he never feared any body except Allah. He was especially well-known in the last years of the reign of the Umayyad caliph, Mu’awyah Ibn Abi Sufyan . Al-Hasan lived in Iraq when Al-Hajjaj Ibn Yosuf Ath-Thaqafi was the ruler and Al-Hasan used to severely criticize Al-Hajjaj’s harsh policies.

Al-Hasan Al-Basri was a close friend of the Rightly-Guided Umayyad Caliph, `Umar Ibn `Abdul-`Aziz who loved him very much and used to consult him in some affairs related to administering the Muslim State. Al-Hasan became the judge of Al-Basrah in 102 A.H., 720 A.C. and performed this role on a voluntary basis.

The Character of the Imam

Imam Al-Hasan Al-Basri was a peerless scholar with vast knowledge. He was eloquent and an ascetic and pious worshipper who used to fast many voluntary days. When he recited the Glorious Quran, he would weep until his tears flowed down his cheeks reflecting the extent to which he was deeply influenced by the Holy Book. He was also a courageous fighter who loved to perform Jihad in the way of Allah. Whenever Al-Muhallab Ibn Abi Sufrah fought the polytheists, he used to put him in the front line. Al-Hasan was greatly admired and esteemed by his contemporary scholars.

Abu Burdah said: “I have never seen a man who did not accompany the companions of the Prophet yet resembled them, like this scholar (meaning Al-Hasan).”

Abu Qataadah Al-`Adawi said: “Follow this scholar, for I have never seen a man who had similar opinions to `Umar Ibn Al-Khattaab except him.”

Abu Qataadah also said: “Al-Hasan Al-Basri was one of the most knowledgeable people on the lawful and unlawful acts.”

Humayd and Yunus Ibn `Ubayd said: “We have never seen a man more decent and courteous than Al-Hasan Al-Basri.”

They also said: “We have seen many jurists, but none was more knowledgeable than Al-Hasan Al-Basri.”

`Awf said: “I have never seen a man who knows more about the way leading to Paradise, except Al-Hasan.”

Al-Hasan Al-Basri was a wise, eloquent man whose words were just like pearls. For example, he said:

“Son of Adam, you are no more than a few days. Whenever a day passes, a part of you has gone.”

“Son of Adam, never please anybody if this entails the Wrath of Allah. Never obey anybody if this entails disobedience to Allah. Never thank anybody for something which Allah granted you. Never blame anybody for something which Allah did not grant you. Allah created people and they steer the course pre-determined for them. Whoever thinks that extra care and interest will increase his provisions, let him try such extra care and interest in increasing his life span, changing his color, or increasing the size of his limbs and build!”

He also said: “Whoever gives money undeserved high esteem, Allah will humiliate him.”

Al-Hasan Al-Basri died on the first of Rajab, which was a Thursday night, 110 A.H., 728 A.C. His funeral was attended by a large number of people. Before his death, he stated that the following should be written down in his will:

“This is what Al-Hasan Ibn Abi Al-Hasan believes: He testifies that none is worthy of being worshiped but Allah and that Muhammad is the Messenger of Allah. Whoever sincerely believes in this upon his death will enter Paradise.”