A truly educated person receives knowledge as a sign (set of signs) that leads him towards the ultimate accomplishment of his existential purpose.
aaa

Many people’s consistent calls for the implementation of such conspicuous concepts as, for example, sustainable development, knowledge-based society, codes and policies for scientific research ethics, scientific social responsibility (SSR) on line with CSR (corporate social responsibility), green technologies, etc., should not be mistaken for global crusades to save – as well as serve — the earth and humanity.

Rather, the people in most cases make such enticing calls not because they are genuinely concerned about the fates of the planet earth and its present as well as future occupants, but because their irresponsible and uncontrollable devouring of the earth and its limited resources became endangered.

From the beginning, the case was never about the earth and the ethical behavior of man towards it. Quite the reverse — it was all about serving and sustaining human ego, greed and self-centeredness. It was all about prolonging the prospect of man’s raping of nature (the earth) and its assets in the name of knowledge, civilization and progress.

Man got so used to the routine that reducing, or stopping, it appears unfeasible. One wonders, therefore, how ethical the people’s present calls for sustainability, ethical scientific conduct, SSR, CSR, etc., in the final analysis are. They are certainly hailed as such, but in reality, they are merely acts of global civilizational hypocrisy, dishonesty and deceit. 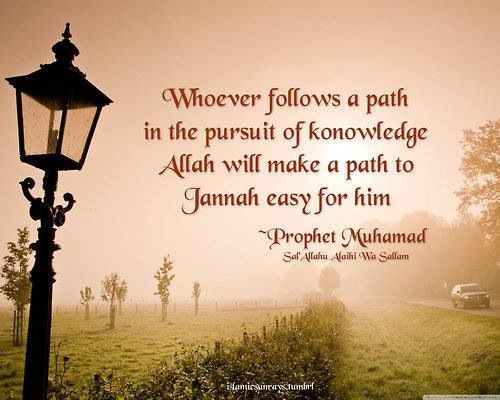 It is on account of this that Islam pays special attention to knowledge, so much so that Islam is regarded as a religion (way of life) of learning and knowledge. It upholds that man is created to know and fulfill his honorable vicegerency mission accordingly. Knowing means succeeding; not knowing implies failure and ruin. Knowledge is the source of all goodness, ignorance the source of all evil and sin.

Knowledge in Islam is synonymous with light and guidance. The net result of an educational system ought to be authentic knowledge, which, in turn, is expected to provide light and guidance to people. It follows that educated individuals are supposed to be enlightened and guided. They are to be pragmatic and at the same time empowered to tackle head-on all types of life challenges. As perennial beacons of guidance, motivation and hope, they are true assets to humanity.

Education is not to prepare a person for his professional life only, and to equip him with a few practical skills relating to his field of interest. Rather, education is to prepare a person for life, enabling him to succeed not only in his chosen specialization, but also in life as a whole. He is to be not only a competent, but also good and responsible, professional. Moreover, he is to be a good and responsible human being, which entails all the other life aspects and activities.

In this manner, a truly educated person receives knowledge as a sign (set of signs) that leads him towards the ultimate accomplishment of his existential purpose. Knowledge is thus called “‘ilm” in Arabic, which is from the same root word as “‘alam”, which means sign, indication or mark.

Upon mastering knowledge, an educated person himself eventually becomes a sign, embodying virtually everything that both education and knowledge comprise. He is thus called “‘alim”, customarily translated as “scholar”.

And the whole realm of educational and scientific ventures and enquiries: the world, is not by chance called “‘alam”, for it – positively — with its physical and transcendent dimensions, is the foremost object of “ilm”, a powerful sign itself, and a locus of incalculable other signs.

Hence, Islamic education is often called “tarbiyyah”, which means development, increase, growth and upbringing. A person that subjects himself to such a holistic system is expected to continuously grow and develop intellectually, spiritually and morally, from the cradle to the grave. And the older he gets, the more knowledgeable and more erudite he becomes.

Due to this, the elderly in Islam are accorded such a venerable status, enjoying an unprecedented degree of respect and honor. The goal of formal educational systems and institutions is to promote, foster and facilitate tarbiyyah.

Indeed, being true Muslim and practicing Islam as a way of life signifies a journey towards self-actualization. People are to always look up, as well as ahead, and be abiding optimists.

The ultimate destination of such a journey will be Paradise (Jannah) as the definitive climax of a process that started with the first thing a person learned about himself, life and Islam. True believers will succeed in both worlds because they knew and performed. Those who fail will do so only because they neither knew nor performed, regardless of the level of their superficial one-dimensional education.

Finally, it is perhaps owing to this – and Almighty Allah knows best — that the opening word in the Quranic surah (chapter) ‘Alaq is “read” and the closing ones: “prostrate yourself and draw near (unto Allah)”. That could mean that a person’s life should commence and unfold with, and in the spirit of, the notions of reading, learning and knowing, which inevitably lead to the realization of man’s terrestrial purpose.

That purpose has been identified with man’s full submission and drawing near to Allah, the Creator and Master. It surely was no coincidence, furthermore, that the first word revealed, or communicated, to the Prophet (peace be upon him) was also “read”, from the first verse (ayah) of the surah ‘Alaq.