Draz is the kind of cultural communication that is needed between Islam and the West, communication based on knowledge, respect and appreciation, that will enable us to live together as good neighbors.
aaa

Muhammad Abdullah Draz was born in Egypt in 1894, the son of a religious scholar. He attended Al-Azhar, where he later taught. He learned French and in 1936 went to France, where he lived for twelve years.

To prepare himself for his PhD, he took a bachelor’s degree in philosophy. His PhD thesis was the basis of this book -The Moral World of the Quran- which was published in French by Al-Azhar in 1947. It was only in 1973 that the Arabic translation was published. Draz died in 1958.

Draz’s aim was ambitious to fill the gap in the West’s history of moral philosophy created by its ignorance of Quranic ethics, and to show that the moral insights of philosophers are implicit in the Quran.

A reviewer on Arabnews.com stated that Draz wanted to show the world the superiority of Islamic morality, but his work betrays no sign of chauvinism and is a model of disinterestedness. He clearly desired a readership in the West, and it is to be hoped, now that his work is available in English translation, that it will enter into the mainstream of Anglo-Saxon philosophy and contribute to the civilized exchanges between Islam and Christianity, and the West in general, that we, so desperately, need.

Central to the book are chapters on obligation, responsibility, sanction, inclination and effort. These being, in Draz’s view, the basic concepts in the philosophy of morals. In addition, there is a valuable supplement of extracts from the Quran on practical ethics; unfortunately this is not linked to the body of the work.

The book bears the impress of its origin as a PhD thesis: it is argued minutely and exhaustively. It assumes a reader familiar with philosophical discourse. 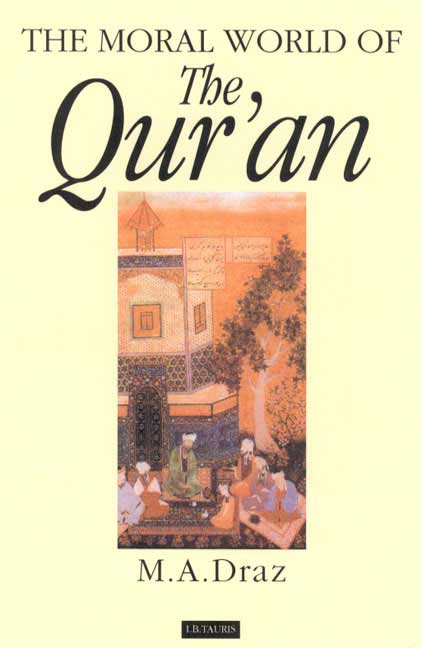 It is noteworthy that, although the Quran is Draz’s subject, he rarely resorts to Islamic philosophy to advance his arguments, and his style of philosophizing is entirely European. His mode of attack is to turn to European philosophers, chiefly Immanuel Kant, to analyze their moral theories and to use these as a means of setting out Quranic concepts by contrast and agreement.

The choice of Kant is unusual since he is not in the classical tradition of European moral philosophy, which began with Aristotle and was taken up by Thomas Aquinas.

Classical moral philosophy, on the one hand, derives from the notion of the Good, and the Virtues, the latter being moral habits which make for human flourishing, that is human good. On the other hand, Kant and Draz base their moral philosophy on the concept of duty, Kant’s famous “categorical imperative”. This phrase simply means that the moral law is non-hypothetical and unconditional; that is, it is not advice or an invitation, but a peremptory command.

Following Kant, Draz announces at the beginning of his work that any worthwhile ethical doctrine is based on the idea of obligation. He attempts to illustrate his thesis by saying “without obligation there is no responsibility, and without responsibility, there can be no return of justice, whence chaos, disorder, anarchy…” (13).

This demonstrates Draz’s dialectical  habit, which he  contracted from his French philosophical training: the progression of his ideas is verbal and rhetorical rather than logical and analytical. He is intent on the expression of an insight rather than its analytical justification; his approach is persuasive rather than probative.

Draz’s procedure is illustrated from the very beginning of his work. He quotes Kant’s proclamation that duty is the source of moral obligation and the highest faculty of the soul, which links man to the rational order, and comments that “the Kantian doctrine is not only incontestable, but … it can also be regarded as similar to the Quranic doctrine” (15).

He further implies the consonance between the Quran and Kant when he affirms that moral awareness is inborn and that this claim is taught by the Quran. Further, he quotes the Prophet:

“Whenever God wants good for someone he raises within that person’s inner heart a counsellor who exhorts him to act or abstain” (Al-Daylami, Musnad al-firdaws, sahih.).

Draz comments that this inner authority which commands is reason (Cf Kant) and that “the very essence of morality resides in the reflective activity of the soul” (15).

He finds this confirmed by the Quranic verse:

This insistence on the rationality of morality is entirely in agreement with the classical European tradition stemming from Aristotle and still maintained by Catholic theologians, at Least in the English-speaking world.

In establishing the rationality of morality Draz mentions the simple truth that no one is obliged to perform the impossible, quoting the verse:

{We do not burden any soul with more than it can bear} (Quran, Al Anam 6:152), but the kinds of impossibility need to be determined carefully. He argues that there are states of the mind which are not subject to the will any more than reflexes and natural inclinations are. Among these, he claims, is love and in particular love of God, alleging this to be “an emotional and involuntary state in itself.

However, Draz seems to be confused here. One should argue that emotions are not subject to commands while the love of God is commanded in the hadith:

“Love God for the goodness He never ceases to shower on you.” (At-Tirmidhi)

Love of our neighbor is also enjoined in another hadith:

“Forgive one another and your resentments will disappear; exchange presents so as to foster mutual friendship.” (Malik, Muwatta).

Thus, the love referred to is not a matter of emotional states since these cannot be commanded: love of God is a disposition not an emotion. In line with the rationality of morality, the disposition to love God can be formed by the exercise of the will in prayer, worship, and the practice of virtue; it is these that will dispose us to love God and our neighbor, but love of God cannot itself be directly willed or commanded.

Nevertheless, Christians will note that we have here, in common with Islam, the two greatest commandments taught by Jesus: to love God, first, and then one’s neighbor. Christians will note too that Draz implicitly endorses the Christian doctrine that human beings have a fallen nature: “whenever we neglect our duty, we feel we are lowering ourselves to a position which does not belong to us: we tacitly avow that we are a noble albeit fallen creature.” (16). He goes on to claim that the Quran does not consider “human nature to be intrinsically bad or irremediably corrupt.” (16). This is precisely the Catholic doctrine.

In one of a number of instances Draz’s exposition of the Quran comes close to the teaching of Jesus. For instance Draz says, “If a debtor cannot pay back the debt, it is a duty to allow him more time; but it is more praiseworthy to allow him not to repay at all” (46). He refers to Quran: {Now if one (in debt) has hardship then let there be respite until there is ease for him. And should you give it up as charity, it is best for you.} (Al-Baqarah 2:280)

One great value of ”The Moral World of the Qur’an”  is its implicit offer to mediate between the Islamic and Western Christian intellectual cultures and its demonstration of the basic values and principles these have in common.

Draz is an outstanding example of a man qualified to the point of excellence in both cultures. Draz is the kind of cultural communication that is needed between Islam and the West, communication based on knowledge, respect and appreciation, that will enable us to live together as good neighbors.

It is to be hoped that Draz’s book, now in English translation, will bear fruit in this way and inspire further such work.