When your Lord drew forth from the children of Adam from their loins their descendants and made them testify concerning themselves (saying): ‘Am I not your Lord (who cherishes and sustains you)?’ They said: ‘Yea! We do testify!’ (This) lest you should say on the Day of Judgment: ‘Of this we were never mindful’ (Quran 7: 172).

“I created all of My servants as hunafa’ (pure monotheists), but the devils diverted them from their belief” (Sahih Muslim).

“No child is born but upon fitrah (the natural disposition/inclination/sound human nature that Allah instilled in mankind)” (Sahih Muslim).

In another version of this hadith, it is added:

“…then his parents make him into a Jew or a Christian or a Zoroastrian.”

According to the dominant opinion of scholars, the above three quotations speak about the same thing. The notions of covenant between Allah and Adam’s progeny, the original state of pure monotheism in people, and the sound human nature, are virtually synonymous with each other.

The gist of the three passages is that Allah took from the loins of Adam his progeny like tiny particles, and made them testify concerning themselves that He was their Creator and Master. Every new born in this world is born with this covenant and affirmation.

In their capacity as the creation and mere servants, all humans are born with the inclination towards their Creator, Master and Sustainer. Everyone is initially free of any false beliefs, and will always enjoy a disposition towards goodness and sound beliefs — regardless of his adopted behavioral patterns — while at the same time innately disliking evil, deceit and falsehood.

Having been born thus, the task of every person is to remain as innocent, pure, natural and true to himself as possible. In other words, every person is to be and stay himself, and nothing else. His existential purpose and mission have been determined by his Creator, so his job is only to stay the course and not give up on himself.

The biggest tragedy, however, is when a person spends – or wastes — his whole life futilely pretending and trying to be something he was not meant to be, or when he engages in a losing battle against the nature of his very self and the nature of some of the immutable constants of Allah’s system.

It follows that a person does not actually become a Muslim; he is born as such. He only needs to strive to remain so, or become a better one. When someone in real life embraces Islam and becomes a Muslim, he only comes back to what he had originally been and was always meant to be. He only sets things right again. He rediscovers himself.

Thus, we do not say that a person converted to Islam, for converting denotes changing or altering a thing from something to something else, and a person never becomes a Muslim for the first time, after he had been something else.

Rather, we say that a person reverted to Islam, for he originally was a Muslim, but at a point of time and due to some external factors, veered off the straight path. He eventually realized his errors, and regretful, decided to go back to his primordial self.

Life, it goes without saying, is an extremely serious and meaningful business. It signifies living only as Muslim — i.e., in complete submission to the will and command of the Creator and Master of the universe — and dying only as such.

It entails unreservedly accepting and living the tenet that man is a servant and Allah his Master, and whatever happens in the course of man’s either successful or failed performing of his worldly mission, there can never be an exchange in titles: the servant must remain the servant forever, and the Master must remain the Master forever.

A person is not to live according to his own will and command, because they are both relative and mundane. Within the scopes of the philosophical enquiries and the statutory excursions relating to the ontological scheme of things, man cannot be at the same time the subject and the object, the source and the target, the savior and the saved.

That is incomprehensively complex and well beyond the reach of man and his rational and spiritual abilities. Trying to do so is too arrogant and preposterous a course of action.

Things were meant to be much simpler, more straightforward and more easily attainable. Thus, while Islam is described both by Almighty Allah and the Prophet Muhammad as an easy and natural religion, philosophy, on the other hand – as a rival of religion — is dubbed almost by everybody, including philosophers themselves, as too difficult, unfathomable and hardly practical a subject.

Indeed, it is only Allah Who beckons by His grace to the Garden of bliss (paradise), the abode of peace and forgiveness (2: 221; 10: 25). Hence, Allah emphatically reminds in the Quran:

O mankind! It is you that have need of Allah, but Allah is the One Free of all wants Worthy of all praise (35: 15).

Human fitrah is not a finished article. It is no more than an extraordinary potential, or a capacity, planted within people, which must be vigilantly taken care of and fully optimized. It is a means for achieving a higher set of goals, not a goal, or an end, in itself. 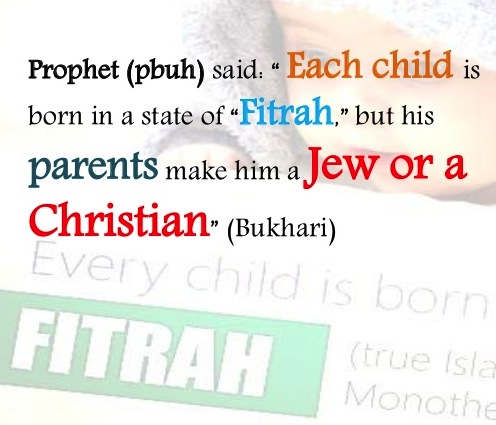 The goal is that fitrah propels man to becoming the exemplary vicegerent of God on earth, whose total actions, words and thoughts will be in full conformity with heavenly paradigms, and whose terrestrial legacy, attesting to and validating the former, will be nothing short of comprehensively virtuous cultures and civilizations. In other words, the goal is man in his totality and his complete ontological (well) being.

Fitrah can be neglected or forgotten, but never fully extinguished. It can be so debilitated that some unfavorable external circumstances could easily overwhelm a human being and, as a result, completely overshadow and incapacitate his fitrah. Bereft of the power of fitrah, a person becomes disoriented and confused. His fitrah’s increasingly faint voices keep falling on his increasingly deaf ears and hardened heart.

That said, being a Muslim means the incessant cherishing and cultivation of fitrah, as well as the provision of the necessary means and facilities that will at once aid and expedite the former. It also means a struggle against the factors and elements, as well as their own means and facilities, which are bent on weakening and hampering the sound functioning of fitrah.

Being a Muslim likewise signifies the spiritual, intellectual and ethical growth of an individual from a growth potential towards the fulfillment of the highest goals pertaining to the highest metaphysical order of things, meanings and experiences.

It further entails a harmonious integration between the “inner and ideal self” and the “real and functional self”. Such is the truest representation of self-actualization which, in turn, is the essence of man’s honorable vicegerency mission on earth.