The successful birth of Islam and the Muslim nation was due in part to the determination of Khadijah, the woman who was the first person to accept Muhammad as a Prophet of God
aaa

Khadijah, daughter of Khuwaylid, has the great honor of being the first person to accept Islam.

She did so at the hands of her husband, Prophet Muhammad.

It would not be wrong to say that she attended the birth of Islam and that she did so with the kindness and generosity that she was already well known for.

Khadijah is an incredible role model for all humankind but particularly for women and girls.

The successful birth of Islam and the Muslim nation was due in part to the determination of Khadijah, the woman who was the first person to accept Muhammad as a Prophet of God and was later given the title the Mother of the Believers.

Khadijah the Pure One

Khadijah was born in Makkah in the year 555 CE.

She was born into a life of privilege and could have spent her days as a woman of leisure but instead chose to help her father conduct a prosperous business.

Khadijah also began to give a great deal of her wealth to philanthropic causes.

She supported the poor particularly widows and orphans and spent her money helping the disabled and sick people of Makkah. She earned the name Khadijah the pure one.

At around the same time her future husband was becoming known as the trustworthy one.

Muhammad was known as a respectable man that could be trusted by anyone.

It is a title that he retained even when many refused to listen to his message.

When Khadijah was in need of a person to oversee her trade caravans she chose the person known for his honesty and trustworthiness, Muhammad.

At that time Khadijah had been twice widowed and was struggling to maintain her business alone.

Although older than him by 15 years she recognized Muhammad as a man worthy to be her life partner and proposed marriage to him.

Model of a Successful Marriage

Khadijah and Muhammad’s marriage became a model for the successful marriage in Islam.

Islam teaches that a married couple should always display tenderness and care towards each other and thus Muhammad worked hard to maintain Khadijah’s successful business and she tried to keep the home a refuge from the trouble and strife of the working world.

The partnership and companionship inherent in their marriage is an example of a successful Islamic marriage.

However, after 15 years of marriage their world was about to change.

Start of the Revelation

Prophet Muhammad was known to meditate and ponder the wonders of the universe alone in a cave but when he received the first revelation from the angel Gabriel, it was a very frightening experience.

He did not expect to be visited by an angel demanding that he, an illiterate man, read.

He ran home to Khadijah saying:

Prophet Muhammad told her what had happened and expressed his fear. Khadijah did not belittle her husband nor did she express doubt in him.

She had no trouble believing Muhammad’s description of what happened in the cave; she knew her husband to be a truthful and honest man.

There was no reason for him to be making up a story unless he was, as he initially feared, going insane.

Khadijah immediately understood that this was certainly not the case and set about reassuring her husband.

She covered him with blankets and reassured him saying:

“God would never forsake you. You uphold the ties of kinship, speak the truth, spend money on the needy, give money to the penniless, honor your guests and help those beset by difficulties.” [1]

The First to Accept Islam

Khadijah assured her husband that he was sane and that this news from God was good, not something to be feared.

After having listened to everything that happened in the cave Khadijah became the first person to accept the message of Islam.

One of Khadijah’s first actions, after Muhammad had grown calm and felt more comfortable in his new found position as the messenger of God, was to take him to visit her cousin Waraqa ibn Nawfal.

He was a man of knowledge who had studied the writings of both the Jews and the Christians and knew that Prophets Moses and Jesus had predicted the coming of a Prophet.

After listening closely to Muhammad’s story, Waraqa told him that the angel was the same being who brought the revelations of God to Moses.

He then told Muhammad that he wished that he was younger and would be alive when his (Prophet Muhammad’s) people turned him out.

Prophet Muhammad, who had begun to trust Waraqa, asked if he would really be turned out and Waraqa replied that no prophet ever came with what Muhammad had been given without being treated with enmity by his own people.

Despite the future Waraqa predicted, Khadijah stood firmly by her husband’s side.

She would continue to stand firmly when family and friends began to turn against him, and even plotted to kill him.

Khadijah became her husband’s most staunch supporter and remained so until the day she died. 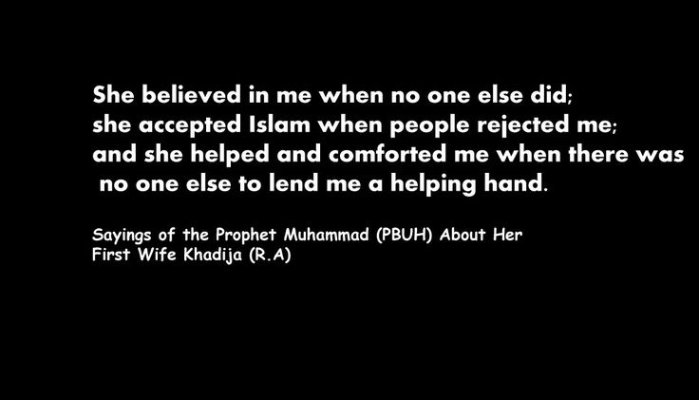 Khadijah encouraged Muhammad to leave the business in her capable hands so that he could call others to Islam full time.

She financially supported him and the new Muslim community while using her influence and political prestige to protect them all.

As the time went on, the Muslim community became more oppressed, suffering terribly at the hands of the cities elite and powerful.

They were abused and tortured and became a banished and boycotted community.

Khadijah provided food, water and medicines for the community that was forced to live on the outskirts of Makkah.

These were conditions that Khadijah had never experienced but she never complained nor did she begrudge the money she spent on Islam that would eventually deplete her fortune.

Shortly after the banishment ended Khadijah died. There is no doubt that it was due to the harsh conditions she and the other Muslims were forced to endure.

The love between Muhammad and Khadijah had grown throughout their ordeals and not even death could break the bonds that tied them together.

Prophet Muhammad once said about Khadijah:

“She believed in me when no one else did; she accepted Islam when people rejected me; and she helped and comforted me when there was no one else to lend me a helping hand.”

The first person to embrace Islam suffered hardship after hardship but remained faithful to her God, her husband and to Islam.

Although it is doubtful that we could ever hope to reach her level of faith and trust in God, Khadijah remains today a role model for anyone who embraces the faith.

The women of today who often face grueling challenges to their new found religion can find comfort and lessons in the life of Khadijah bint Khuwaylid.