My name is Alison Stevens. I’m now 51 years of age, and I converted to Islam when I was 47.

I was born in England but my parents are Irish Scots.

My father was in the oil industry, so we moved all over the place. So I don’t have any fixed roots anywhere really, and we eventually ended up in Scotland in the early 70s.

Apart from going to church services with the school at Christmas time, there was no religious upbringing at home at all. Secondary education was mostly in Scotland. And again there was compulsory religious education lessons, but we all very much resented going to those, because, at that point, really most of us were secular and didn’t see any need for religion, and certainly didn’t enjoy going to the church services that we had to go to at Christmas time.

I’ve always respected religious people, but for me it was not necessary, I didn’t feel any particular yearning. To be honest, I felt religion caused a lot of problems and I was more interested in the human condition and caring for human beings.

I Didn’t Believe in Religion

I called myself atheist. I was more ninety nine percent atheist, but there was this tiny little bit of me that couldn’t quite call itself completely atheist. That’s the whole beauty of the thing. I wasn’t actually looking at religion at all.

My hospital had recruited some people who were very evangelical Christians, and, in fact, they were putting me really off of religion completely, they were actually driving me away totally.

And I’d got to the stage where actually I’d written in my will that I wanted a non-religious burial… But what happened was every day when I went to work, they had the Bible open and they would quote bits of the Bible to myself, and as other non-believers, and would go on and on.

I don’t know, in metaliation, I bought a lot of books. I bought the Quran, the Torah, 365 sayings of Dalai Lama, and of course I have to be an atheist.

So when they go to work on Monday, I lie the books up next to theirs, and of course when they saw this, and saying:

“Well, it seems you’re so interested in religion, I thought it was time you broadened your horizons.”

I was so angry at them because they were splitting the units and causing a lot of problems.

And within a few days, they asked me to remove the books, and they promised they would no longer talk to any of us about religion. Fine. 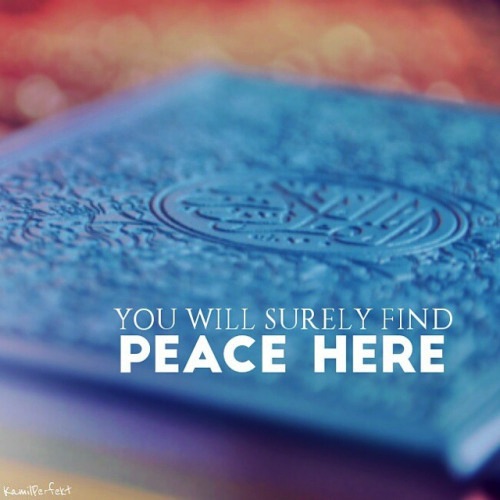 The Power of the Quran

I took the books home and was just flicking through them very quickly, and again I didn’t feel anything particular. But I opened up the Quran thinking: “Ok, let’s just see what this is all about.”

Anyway, I remember reading the words and thinking:

“Well this isn’t what I expected!”

And I read a bit more and thought:

“I can’t believe what I’m reading.”

So I shut the book and thought: ‘Okay, I’ve read a bit now…’, but I couldn’t stop reading it.

So a few days later, I decided to read from the front. It was just wonderful. It was so gentle but very profound. It was very powerful. And just reading the words, I desperately tried to rationalize it and kept reading.

The more I read the more it made sense and, as I said, it really was like a light had been turned on.

Very bizarre for somebody who’d been so against religion.

Making Sure of the Translation’s Accuracy

I remember trying desperately not to believe what I was reading; resisting it, and at one point closing the Quran and thinking: ‘I’m never going to read this any more’, but I couldn’t help myself. It was a very strong thing.

So after reading a few chapters, I thought:

“Well maybe my translation is wrong.”

I decided to visit a mosque. I made the choice of choosing a mosque far away from where I live, because I didn’t want anyone to see me.

I went to the Masjid and pulled on a scarf and everything… I met this Imam who confirmed that what I was reading was not the most beautiful of translations he said but actually was accurate. I remember him saying:

“Are you planning to convert?”

I said: “Oh, certainly not. I’ve just come about the book, you know, and I try to make it some sort of intellectual exercise.”

But there was something deep inside that was changing very quite dramatically.

I got home that particular day, and I remember the Imam kept saying to me, ‘it was a very special day’ and I said, ‘yes, I know it’s a special day.’

Islam Was Right for Me

I got home and turned on the television and, of course, again vowing: “What I’ve done now, I’m going to walk away from this.” And it was the Prophet Muhammad’s birthday that day, so how can you ignore something like that!

So a few days later, I came to work and I took aside one of my Muslim colleagues, who’s a doctor, and she thought I was going to tell her something dreadful about a patient, something awful had happened.

And when I told her, she was in quite a big shock because I said: ‘I don’t know what to do.’ She then gently guided me.

I didn’t feel coerced or forced. It was very much a decision that I wanted to make. I questioned myself constantly:

“Was this some sort of middle-aged crisis?” At one point I thought maybe I should just become a Christian because that was more traditional, but I just knew that wasn’t right for me.

So after a few weeks with her, I did my Shahadah. I did it completely voluntary. I just felt inside it was right.