For two years, I ignored God and searched for fulfillment elsewhere.
aaa

I was raised in a generally non-religious, typical mid-western American home.

I became a very practicing Evangelical Christian when I was 15 years old, much to the chagrin of my family. Everyone called me a ‘Bible thumper’ because I was always advising people to behave in Biblically-sound ways. This, of course, made me less-than-popular in high school.

By the time I got around to college, I had found my calling: Missions. I wanted to travel the world for Jesus, showing people his love by helping them in practical things in life.

In Bible college, I learned how the Bible was compiled and changed across thousands of years, and what the Bible actually teaches.

Many of these teachings bothered me. Primary among them was the concept of “original sin”, or the belief that because of the sin of Adam and Eve—and the Bible story blames Eve—all people are born with a sinful nature, inclined toward sin, and doomed for hellfire until and unless they decide to accept Jesus as God and worship Him.

Despite my inner doubts, in the summer of 2007, I embarked on a missionary journey to India and I was changed forever by the experience. I met people from all walks of life and was forced to confront my doubts and questions head-on for the first time in my life.

By the time I left India, I had lost all my faith, gotten married to a virtual stranger, and dropped out of Bible college. I had two words for God: “See Ya.”

For two years, I ignored God and searched for fulfillment elsewhere. And then, in January of 2009, I shattered my left leg in an accident and was forced to lay in bed, essentially, for 6 months.

Let me tell you: that accident is my greatest joy now, and every time I walk somewhere and the pain in my leg is unbearable, all these years later, I thank God, because it was those months of being forced to ponder on the meaning of life and my role in it that lead me eventually to Islam.

Later that year, I had learned to walk again and moved to Chicago. I found myself a dream job and a great apartment.

But in one strange day, I lost both my job and my apartment. I had nowhere to go, nowhere to turn. I was homeless with my young son, living in a motel. But rather than focusing on finding jobs, I spent my days and nights, while my baby slept, watching video after video on YouTube of people who had chosen to embrace Islam, many against violent odds. 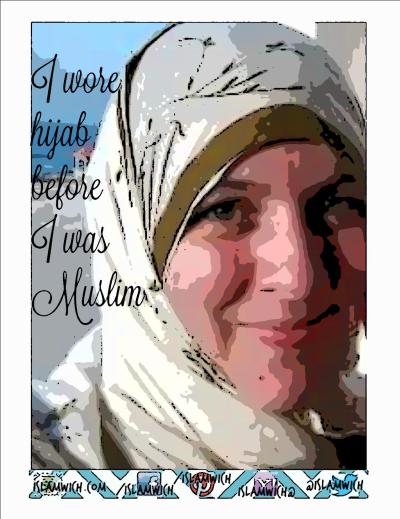 Finally, after weeks of this, I decided to call the local mosque because I wanted to speak with someone in person who had embraced Islam.

I received a phone call later that same evening from a woman who was a Puerto Rican/Italian convert to Islam. We arranged to meet at her home the following day. She was so kind and so welcoming and seemed like a normal American to me.

She asked about my work experience and when I told her I was an experienced ESL teacher, she jumped at the chance and called her old workplace, a small Islamic school near Chicago. She knew they needed an English teacher right then, and arranged an interview for the next day.

As long as I live, I will never forget the way the Principal of that school made me feel: like a dignified, respected, respectful woman who deserved kindness and straight talk. He told me that he believed I was qualified for the job, and was hiring me based on that assessment alone. He told me that he had no interest in hiring me in order to ‘convert me’, and that my job was absolutely not conditional on my acceptance of Islam.

Since it was a boarding school, there were rooms for students to stay in, dorm-style rooms, and my baby and I were welcome to come stay in a room there.

In just a few days, the holiest month of the year for Muslims began: Ramadan. The students who were my age and were studying Islam in depth (so not my middle school students) moved into the dorms and I found myself surrounded by women who understand their place in their faith and their communities, which were rich and varied.

I read whatever books I found in the library, and eventually decided to read the English meanings of the Quran. I came to the middle of the chapter called Al Ma’idah (The Table Laid With Food, referring to the Last Supper of Jesus and his disciples). In that chapter, God says about Jesus:

And [beware the Day] when Allah will say, “O Jesus, Son of Mary, did you say to the people, ‘Take me and my mother as deities besides Allah ?’”

Indeed, it is You who is Knower of the unseen. I said to them nothing except what You commanded me, that is: ‘Serve Allah, my Lord and your Lord.’ I watched over them as long as I remained among them; and when You did recall me, then You Yourself became the Watcher over them. Indeed, You are Witness over everything. (Quran 5: 116-117)

And that was the day I knew, for sure, that Islam was the truth.

I became Muslim on August 28th, 2009, on the 7th of Ramadan in the Hijri Year 1430. It was then that the real struggle began, my internal jihad to hold strong to my faith in the face of a culture and people who were and are ruled by fear and paranoia, and would forever be a stranger amongst my own people.