It is hard to find adequate words to describe guidance and the feeling of faith when it first enters the heart.

But Mallory Jenkins, a 22-year-old from Missouri, describes it perfectly: “I feel at peace!”. It has been six weeks since Mallory took her shahadah and the feeling is still fresh.

That feeling of new iman is perhaps best described by the newly Muslim. It is like the blind person describing what they are seeing at first sight. It brings a renewed appreciation for those who have always seen and have taken it for granted.

“I think the beauty and sanctity of religion is that it is pure, and we are not; Islam was the religion I knew I could become a pious and pure person through. I could see all the ways I was flawed and all the ways Islam- through practice- could help me come back to Allah SWT. In regards to beliefs of Islam- it just clicked.”

Mallory’s path to Islam, like many of those who convert, was one fraught with challenges, disappointment, and pain.

She recalls that her journey in faith started with heartbreak: “When I was nine years old I remember my mother telling me that my grandmother (whom I was incredibly close to) had lost her battle with cancer. I ran upstairs crying and thinking there couldn’t possibly be a God. Who would do such a cruel thing to such a wonderful human being? I had struggled with my faith ever since that day.”

The death of her grandmother profoundly impacted her young life. But Mallory continued to face challenges. In high school she began sneaking out of the house, failing classes, self-harming; and more recently, she was diagnosed with bipolar disorder and anxiety. But she found answers and direction in a different path.

“I think as somebody that has bipolar disorder, there’s a lot of things I struggle with. Structure, routines, promiscuity, mood. Looking at things from a practice perspective, it [Islam] fit everything I felt I was missing or struggling with in my life.

Salat helps keep me on a routine and regulate my mood, hijab makes me feel more comfortable interacting with men, and reverting and observing Ramadan has truly helped me changed my mindset and acquire patience.” 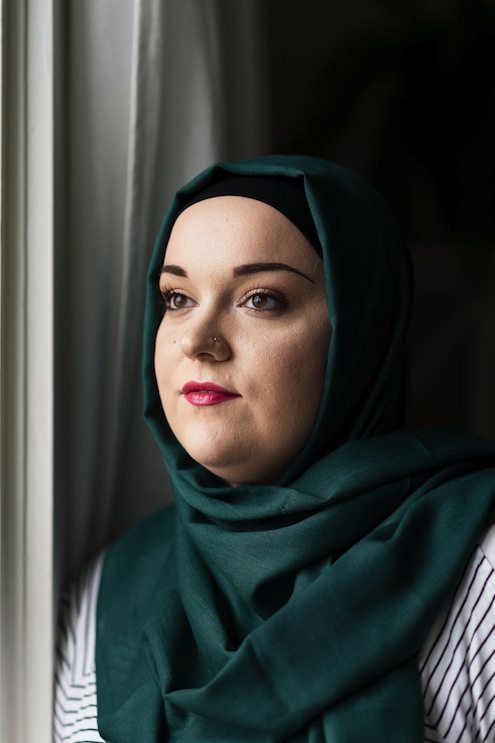 When asked how she learned about Islam, Mallory said, “I don’t really know what brought me to Islam, other than the Will of Allah SWT!”

Before accepting Islam, Mallory’s life spun out of control. She says:

“I thought I was living my best life until all of my partying put me in the worst situation of my life. Once that event happened I was forced to take a step back and seriously evaluate the decisions I was making in my life.”

After this experience, she took stock of her feelings about faith.

“When I forced myself to evaluate where I stood on faith and religion,” Mallory explains, “I decided that fundamentally I couldn’t get behind Christianity as a whole. […then] I started learning [about other faiths] by watching lectures on YouTube and purchasing books on Amazon. My favorite resource actually ended up being About Islam 101!”

After the shahadah, there are many changes and challenges that new Muslims face, including their family’s reaction. Mallory is facing this challenge now, as she says:

“ALL off my immediate and extended family on both sides are Catholic. To make things super fun, my mother is also my manager at work. I choose to hijab almost all the time when I’m outside of the home, but when I’m at work I don’t […] I don’t want to take it off. But I do for my mother’s sake, because I know she isn’t ready to see me in hijab yet.”

However, Mallory sees hope for the future.

“My parents and siblings are slowly coming around to it, but it’s taking time,” she explains. “It’s a hard balance between trying to be respectful of them and also being true to my religion. For example, at family night, I will do salat in a spare bedroom so they won’t be uncomfortable and that isn’t a huge deal to me. And my mother makes sure there isn’t any pork in whatever we do for dinner.”

In addition to family, community is another adjustment new Muslims face. Finding a place in their new faith community can be surprising in both positive and negative ways. For Mallory, it has been a pleasant experience.

“When I finally did [connected with Muslim sisters], I experienced how warm and open the community was!”

Finding Muslim woman to connect with locally and becoming a part of a new community has been eye opening for Mallory:

“I always thought the Muslim community just kept to themselves because of all the hate people spewed towards them […] I realized the reason I had trouble finding sisters was because I was too afraid to find them. It really opened my eyes to how we’re subconsciously prejudice in America. I was disappointed in myself but now it makes me have a deeper understanding for why hijabis get stares so much.”

Mallory wears hijab as much as she can, and when she does, she sees the stares from strangers as an opportunity.

“I think it’s great that people look; I tell my husband to meet their stares with smiles- let them know it’s okay to process what they’re seeing! Every moment somebody stares at me is another moment their brain gets to tear down some ridiculously perpetuated stereotype. Permission to be awkward= granted.”

Advice for Those Thinking about Islam

When asked if there was any advice she would like to give to people on the brink of becoming Muslim, she had some wise words to impart:

In addition, Mallory advises people studying Islam to seek answers from Muslims. She says, “[…] don’t be afraid to reach out to people or ask questions! The very first hijabs I bought were from a woman I met in Target […] Turned out later that she never goes to that store and just happened to be there that day, and I didn’t find what I was looking for- all that either of us left with were each other’s phone numbers! Now I have scarves from her and a new friend. Masha’Allah!”