When we talk about people coming to Islam and embracing a religion that is foreign and unknown to them, we often leave out a significant group of people. There are some who experience the same journey of discovery yet are often not acknowledged with the same enthusiasm. When we celebrate new Muslims, we tend to overlook those who have discovered Islam even though they were born into the Muslim faith.

Muslims who reaffirm their faith, or for the first time truly accept Islam and all its inherent traits experience much the same awakening as those who come from a different faith or no faith at all. We usually categorize such a person as a non-practicing Muslim however perhaps they should be thought of as those who do not understand the significance of what they are doing; those who do not realize that their daily habits have a deeper spiritual dimension.

For some of these people this journey follows many of the same paths and laneways that non-Muslims traverse. Sometimes the journey is slow and meandering but for others it is direct highway onto the straight path. When a born Muslim embraces the real Islam they are often engulfed by the same emotions and desires as any person who embraces Islam. These include, but are not limited to, the desire to learn how to pray and make du’a beautifully and effectively, the desire to tell people about their discovery and sadly there are times when they need to cover their new found enthusiasm for Islam.

We have, in the previous articles, learned that journeys of discovery throughout the ages are eerily similar; this is no less true for those described as born Muslims. Many Muslims with little or no understanding of their faith have discovered the beauty of their religion and reaffirmed their faith with new vigor.

Let us travel back to the 12th century and meet a man known to the world as Mansa Musa. He was a man born and raised to be a leader among men; he was also born and raised in a nominally Muslim family. After a journey of discovery to Makkah he embraced his faith with new vigor. In addition to this, he may have inadvertently funded the European Renaissance and did indeed change the face of the Mediterranean world.

The story of the people of Mali is told in an epic poem known as The Epic of Sundiata. It began life as an oral tradition and the amount of fact contained therein is open to scholarly debate. However some things are verifiable due to the writings of North African Arab historian Ibn Khaldun. In the epic Sundiata, the founder of the Malian Empire[1] claims to be descended from Bilal Ibn Rabbah, one of the close companions of Prophet Muhammad. It is also said that Sundiata, a warrior and diplomat converted to Islam as a pragmatic act of statecraft.

Sundiata’s son, adopted sons and brother all had Muslim names suggesting at least a nominal adherence to the Islamic faith. His grandnephew Mansa Musa, took control of the empire after a period in which the family had lost control. Although Mansa Musa was known for his piety it is recorded that he often performed the rights and ceremonies of the Mandinka faith.[2]

This traditional African belief system included belief in the spirits, witchcraft and veneration of the dead and Mansa Musa is known to have presided over traditional courts and settled witchcraft cases. 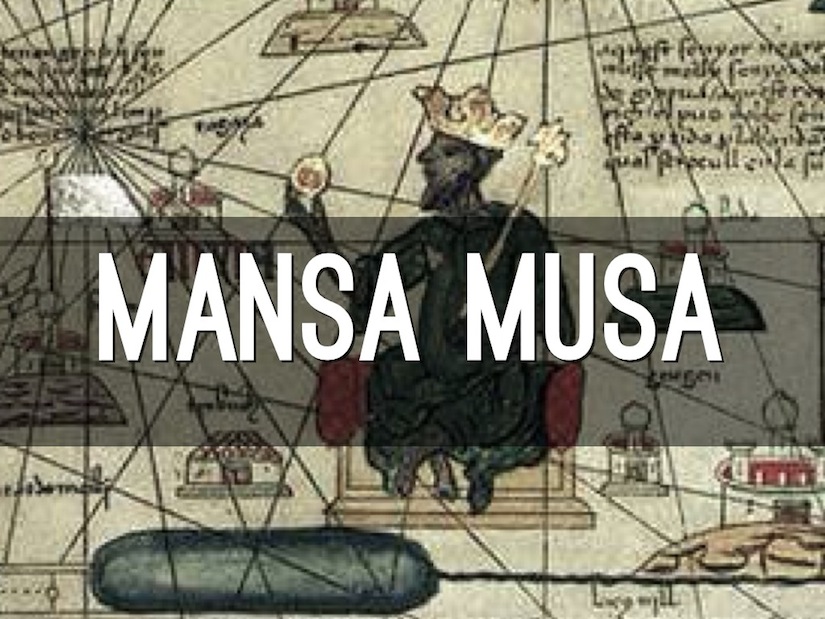 Around the Muslim world today many cultural practices are mixed with pure Islam. Many people combine these two things without understanding the gravity of what they do. In 1324 Mansa Musa made his pilgrimage to Makkah and it seems to have strengthened, and to some extent purified his Islam. Something he has in common with many Muslims today.

Mansa Musa was a very wealthy man, even by today’s standards, and along the route of his 3,000 mile journey he had the opportunity to show his generosity and piety by giving in charity, and building mosques. In addition to this he is the only person in recorded history to directly control the price of gold in the Mediterranean. So much gold flooded into Cairo, and later Makkah, that the value of gold collapsed.

The economies of all the countries he travelled through were altered. Prices on goods and wares super inflated in an attempt to adjust to the amount of gold spreading through local populations. In fact, it would take 20 years for the price of gold to recover. Mansa Musa’s Hajj had a direct effect on the Mediterranean world’s economics but what effect did the Hajj have on Mansa Musa?

We have no record of what Mansa Musa felt as he walked into the masjid, we don’t know if his eyes filled with tears as he glimpsed the Ka’bah for the first time. His Hajj however cannot be dissimilar to those taken every year by millions of faithful. It is always part of a journey of discovery. Many people come back from Hajj spiritually cleansed with a determination to do better; to throw off the trappings of their old lives and please God. Many of them reaffirm their faith and in a very personal way choose Islam rather than only be Muslim because it was thrust upon them at birth.

Mansa Musa had chosen to place his vast West African empire firmly in the Muslim world and Islam was the state religion. His experiences at Hajj[3] taught him a great deal about Islam[4] and when he returned he bought back with him, a library of Arabic books, religious scholars and an architect who introduced new developments in architecture throughout his empire. He strengthened Islam by making Timbuktu one of the foremost centres of Islamic scholarship in the Muslim world.

According to Ibn Battuta (1304 -1377), who visited the Empire around 17 years after Mansa Musa’s death, the Africans were punctual in their observance of prayer, fastidiously observed the rules of cleanliness and competed with each other in giving charity.

Many Muslims say the Hajj is a life-changing experience, including American civil-rights leader Malcolm X, who said it changed his views on whites and racism.

People, from all over the world return home from their Hajj with new determination. Some who considered Islam a birthright and little more than that, often return to their lives thinking of Islam as a precious gift from God. Other people return home to family and friends who misinterpret their new views as extreme, these Muslims often find that they have a lot in common with those who convert to Islam from other religions.

Their journeys of discovery are very similar and so too are their onward journey to educate themselves and practice Islam in the way it was intended.

3 The pilgrimage to the house of God in Mecca, one of the five pillars of Islam.