There was comfort in what I was going through as an individual, but also there was enlightenment for what I had to do to grow the culture and faith around me.
aaa

If you’ve ever seen Preacher Moss of the “Allah Made Me Funny” comedy trio perform, then you’ve heard this joke.

“If it were legally possible, I’d change my name to ‘Allahu Akbar,'” Preacher says.

Then he goes into a bit on how great it would sound at the airport to hear security officials to read off his passport, “Allahu Akbar.”

But that’s not the best part of the joke. “Meet my children,” Preacher says. “‘Mashallah’ and ‘Inshallah.'” And that’s when the laughter really starts flowing.

But the final stomach-hurting guffaws come at the very end of the routine: “And then my third child will say, ‘That’s not Daddy’s name.’

So I’ll point to him and say, ‘You’ll have to pardon my youngest. He’s named ‘Astaghfirullah‘ (I seek Allah’s forgiveness).”

It’s jokes like these about being Muslim-American mixed in with Preacher’s unique take on the black experience that has made him a mainstay on the American comedy circuit and in the entertainment industry.

Whether in his comedy routine or in an interview, Preacher makes it a point to reference his Christian upbringing as a grounding influence.

But there was something special about Islam that drew him as a youth, as he watched the rise of the Black Panther movement and the Nation of Islam, with leaders like Malcolm X, and its positive influence over black youth in Washington D.C.

Two memories stand out for Preacher for how he learned about the great power and beauty of what he dubs “protest Islam” and “regular Islam”, or the Islam born out of the Nation of Islam and black pride versus the Islam practiced by thousands of other immigrant and first-generation communities.

The first memory was of his classmate in school, a Muslim practicing a daily kind of Islam that seemed ordinary to Preacher. But he respected his classmate for adhering to his faith, even though it was difficult to do so at times.

The other, more impactful memory was one of a fellow Preacher knew on the streets of D.C. who was consistently in and out of trouble.

One day Preacher and his friends heard that this troubled youth had met his demise. They went to his house to pay respects to his mother and saw books about Islam strewn about his room.

“I saw that he had something. He was on the path to go somewhere great. He knew something that I didn’t know about,” Preacher recalls, “and I was eager to know more about that path.”

Taking the Shahadah (Testimony of Faith) and Growing Culture

Becoming a Muslim was something that slowly took over Preacher as he made it through the teenage years into life as a college student at Marquette University in Wisconsin, where he studied journalism and film.

“During the college years, coming to Islam was a fight,” Preacher says. “Do I want to go this way or do I want to stay that way? It was a lot of internal conflict. You’re consumed about this process, what it’s going to do to you, without understanding the value of the process.”

Preacher Moss, who doesn’t remember the exact date of his Shahadah, though it did happen after his college years, learned his Islam from many sources. He became a teacher working with emotionally disturbed children and did comedy on the side. The real journey began after taking his Shahadah.

As Preacher read more about Islam and spent time with people learning the faith, he found that the words of the Quran and the traditions of Prophet Muhammad (peace be upon him) were true and absolute. But the people explaining things about Islam to him were either helpful or manipulative.

“There was comfort in what I was going through as an individual, but also there was enlightenment for what I had to do to grow the culture and faith around me. There’s no way there would’ve been an ‘Allah Made Me Funny” had I not learned how to grow the culture.”

Indeed, it was this concept of growing a “culture of faith” that propelled Preacher along his Islamic path. “I ran into people, some of them were very knowledgeable, who would talk about this tradition of Quran and prophetic growth and pathways, but in the end, it becomes a stalemate because they weren’t good at growing culture.”

“They were good at talking about culture of several hundred years ago, but they couldn’t replicate it (for modern times),” Preacher says. “It’s an unnatural balance, where knowledge becomes the only thing of value at that point.

What I found that it went directly against the whole idea of the protest religion, in which we’re inspired to grow and deliver and develop a culture where we live our Islamic faith in our lives today.”

The Comedian and Islam

Growing into Islam was a struggle in itself, especially as Preacher delved further into his love of comedy and became a part of the entertainment industry.

With Hollywood calling him, Preacher Moss quit teaching, gave his retirement money to his mother, and left to pursue his comedic dreams.

Being Muslim in Hollywood was no easy task, and Preacher was hard-pressed at times because he wouldn’t write derogatory jokes about women or other topics that seemed anti-Muslim. And though his material was good, and though he was championed by Lopez and Hammond, Preacher Moss decided to leave Hollywood and go the stand-up route.

He teamed up with comedians Azhar Usman and Azeem, and later Mo Amer, to form “Allah Made Me Funny” as an extension of the “Protest Islam” he grew up admiring. It was a way to be Muslim and put it out there on display, a way to keep protesting against boxing in of Muslims.

“I want Muslims to get off the sidelines and start expressing themselves,” Preacher says, “And not in a Muslim bubble.”

When Preacher Moss joined up the other comedians to make the “Allah Made Me Funny” comedy troupe, their mandate was “to be as good as their competitors, if not better.” And the reason was this: “Every time someone listened to us (and they were Muslim), they’d say, ‘Listen, these guys have values. Either values that make me look at my own values or values that make me want to get out there and do it to.'” 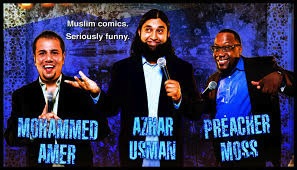 And as popular as the comedy group is in the United States and other parts of the world, they still have trouble performing in Muslim countries like Saudi Arabia or Dubai.

“We’re showing a new and different narrative on what it is to be Muslim,” Preacher says, “and that can be hard to swallow in the countries where Islam began.”

But that’s what Preacher Moss has always been about: Being public about his faith and pushing for a way for Muslims to be part of the system without giving up their values. And though he has now been a Muslim revert for over 20 years, it’s still a learning process, he says.