“Fasting the day of Ashura (is of great merits), I hope that Allah will accept it as an expiation for (the sins committed in) the previous year.” (Prophet Muhammad)
aaa

Fasting on Muharram 10, known as the Day of Ashura expiates for the sins of the past year. When the Prophet (peace be upon him) arrived in Madinah in 622 CE, he found that the Jews there fasted on Muharram 10 and asked them the reason for their fasting on this day.

“This is a blessed day.”

We are closer to Moses than you are.

He fasted on that day and commanded Muslims to fast on this day. (Al-Bukhari)

The following year, Allah commanded the Muslims to fast the month of Ramadan, and the fasting of Ashura became optional.
It is also reported that the Prophet (peace be upon him) intended to fast on the ninth and tenth. Ibn ‘Abbas reported:
The Messenger of Allah fasted on the day of Ashura and ordered the people to fast on it.

“O Messenger of Allah, it is a day that the Jews and Christians honor.”

When the following year comes, Allah willing, we shall fast on the ninth.

The death of the Prophet came before the following year. (Muslim)

Thus, according to scholars, you may choose to fast Ashura on three days (ninth, tenth, and eleventh); two days (ninth and tenth); or one day only (the tenth).

Fasting the day of Ashura (is of great merits), I hope that Allah will accept it as an expiation for (the sins committed in) the previous year. (Muslim)

But this expiation of minor sins comes only if you avoid major sins. It is a big mistake to rely on fasting a single day to “wipe your slate clean.” If you neglect your daily Prayers or the fast of Ramadan, or if you backbite, lie, commit adultery or other major sins, fasting on Ashura alone will not atone for your sins.

Among those deceived people may be one who thinks that his good deeds are more than his sins, because he does not pay attention to his bad deeds or check on his sins, but if he does a good deed he remembers it and relies on it. 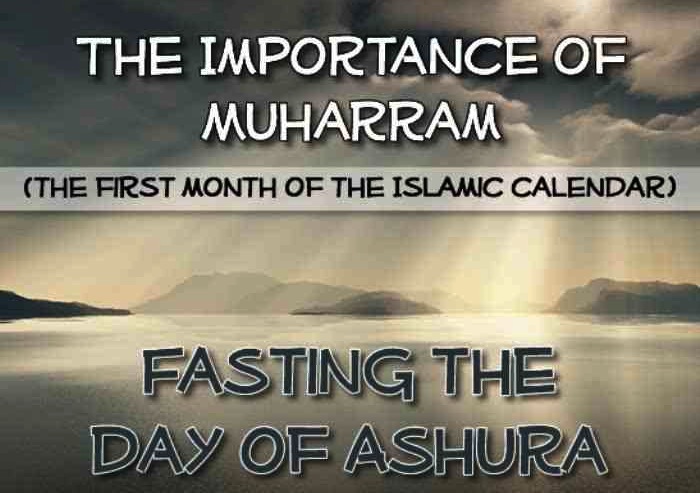 This is like the one who seeks Allah’s forgiveness with his tongue (that is, by words only), and glorifies Allah by saying “subhan Allah” one hundred times a day, then he backbites about the Muslims and slanders their honor, and speaks all day long about things that are not pleasing to Allah.

This person is always thinking about the virtues of his saying “subhan Allah” and saying “la ilaha illa Allah” but he pays no attention to what has been reported concerning those who backbite, tell lies, and slander others, or commit other sins of the tongue. They are completely deceived.” (Al-Mawsu’ah Al-Fiqhiyyah, part 31, Ghuroor)

You may hear of some customs associated with `Ashura such as cooking and eating certain foods on that day, wearing kohl or henna, or even merrymaking.

Others consider this a day of mourning and wailing in honor of the Prophet’s grandson Al-Hussein, who was killed in battle on that day.

The scholar Ibn Taymiyah (b. 661 AH/1263 CE) stated that all of these are bid’ahs (reprehensible innovations) that should be avoided.
Take advantage of this opportunity to bring yourself closer to Allah on Ashura by fasting and praying for forgiveness.