The reason our youth get bored with the religion, is because we brought them up to give more importance to this world than the Hereafter.
aaa

A baby is born in a Muslim home. All material preparations have already been made before the birth. As the parents gaze and coo at their new bundle of joy, they resolve to provide him or her with everything necessary for achieving success in the world.

Prayers are skipped by the family during the subsequent birth celebrations. Tahneek by a righteous person is a sunnah unheard of in their home. The aqeeqah gets postponed as well, with a casual “Oh, we’ll get it done later by any Islamic organization”.

The parents sporadically advise the child to start praying, although neither of them pray regularly, nor do they even know the correct method of ablution.

On Fridays, the reluctant child is forced to pray Jumuah. For learning Quran, the child has hopped from one tutor to the next. Quran lessons are rushed, terse and short; hastily done with, and culminated altogether at age 12.

When the child asks the parents questions about creation, life, birth, death, and other philosophical matters, the parents brush off these questions with curt, whimsical replies.

Discussions about “God” are not encouraged. The child knows that a man named “Muhammad” is respected and revered in the home, because he brought a holy book called the Quran that they are encouraged to “read” (without understanding a word). Once a year, the child is made to fast from dawn to dusk for a month, because the holy book says so.

Academics and school work, however, is given top priority in the house.

Struggling to remain celibate and sober, after a few heated discussions about religion with their roommate, this “Muslim child” is now having serious doubts about their faith. The temptations are too many; the sacrifices to adhere to a religious belief that they hardly know, too great.

The truth is: he or she wants to leave Islam in order to be ‘free’ to live a carefree life full of fun, just like their college mates.

The above story might be a fictionally generalized one, but it does depict a growing reality. This is happening to more and more Muslim youth across the world, be they dwelling in the chaotic, corruption-wrought, developing Muslim-majority countries, or the more developed, secular, and ‘progressive’ non-Muslim-majority ones.

For the first time in the history of mankind, media and ease of travel are making cultures converge across the globe. This has caused an information overload to trickle into every aspect of our lives, 24/7.

Now, be it an age-old traditional food recipe, or a centuries-old religious doctrine, ― everything is under pressure and under scrutiny to “diversify” and change, in order to “adapt” to the times.

There are a few basic reasons why Muslim youth move away from religion and its practice today. Below, I have attempted to highlight them broadly, in chronological order:

The first most important reason why Muslim youth relinquish religion, is because the roots of their faith were not properly and deeply planted into their hearts, when the time was right to sow them.

That is, as a fetus in the womb, and during the first 10 years of life after birth, they should have been connected to Allah through the Quran. All their innocent questions about the life of this world should have been answered by referencing the Quran as a source of guidance.

Furthermore, they should have been thoroughly indoctrinated with the 6 articles of the Islamic faith, which form the basis of the creed ― i.e. belief in one God, His angels, His scriptures, His messengers, the Hereafter, and the Divine decree. 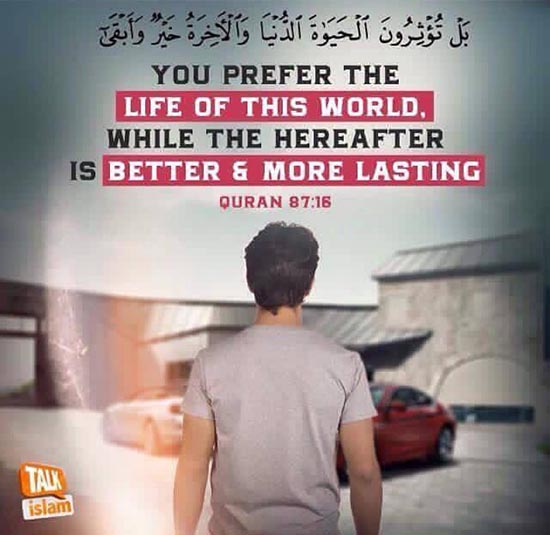 Too Much Emphasis on Worldly Education

After the age of 10, most children from educated families are permanently shackled into an orbit that revolves incessantly around school.

Never mind that half (if not more) of their school curriculum has little to do with their interests, or with practical adult life. Yet, most Muslim parents’ top priority for their child is getting good grades in school.

While there is nothing wrong with giving a child a good education, it is wrong if this worldly education comes at the price of undermining that child’s religious beliefs, moral training, and character-building.

During youth, imparting authentic Islamic knowledge and a deep understanding of the Quran to a Muslim child should not be an after-thought, or a weekend activity.

Young people absorb influences of all kinds very quickly. School and college life come with the added curse of peer pressure and all-too-influential friendships. Being popular and admired by one’s peers and clique at school/college, and to be accepted by them, is usually a top priority for youngsters. What’s more, successful networking with peers during university years goes on to impact their careers as well.

If a youngster’s belief in and adherence to Islam becomes an obstacle in establishing amicable relationships with peers, they can easily become disillusioned. This can lead to undermining their religious practice in order to just blend into the crowd, have fun, and achieve material success in life.

If their peers are all heading gung-ho towards getting the right job, house, family, and car, they want to do so too.

Lastly, it is sad but true that practicing Muslims are no longer the majority front-runners in the high-achieving, educated and progressive world. In any field of progress, be it medicine, literature, science, sports, finance, business, education, or technology, non-Muslim bigwig names dominate the fore of achievers and award-winners, whereas Muslims trail behind.

For the young Muslim, the question pops up: “If Islam was the only true religion, why do Muslims not have success, progress, honor, and peace in this world?”

Since they desire material success & wealth, they equate leaving the Islamic religion (or its outward practice) with having more chances of achieving worldly success.

Conclusion: It is All a Trial

If the reason for our youth moving away from Islam could be summarized in a nutshell, it would be: love of the world over the Hereafter, due to weakness of faith.

In order to prevent this, we ― their parents, teachers, and mentors ― need to change our priorities first, and completely overhaul our current early childhood education system.

The reason our youth get bored with the religion, is because we brought them up to give more importance to this world than the Hereafter.

May Allah grant us all high ranks of faith and righteousness. Ameen.