Among the difficulties of being part of the Muslim ummah after converting to Islam is balancing between expectations and reality!

For most new Muslims (based on the writer’s experience rather than concrete research), converting to Islam has been based on research, learning the faith, reading the Quran or having been given dawah by someone else.

The preacher of love and mercy is the same person who is harsh when you disagree with him.

During your shahadah day, multiple brothers and sisters will have promised to “be there whenever you need me”, and yet today they excuse themselves from even picking up your phone!

Whereas the Prophet (peace be upon him) was known for his concern towards the weak and the needy, the disabled and deprived, such members of Muslim society are at times completely blanked by the majority.

So how does someone who has come face-to-face with this reality deal with this? He/she was expecting the Prophetic ummah that prays together, eats together, and helps one another.

He/she was expecting that this would be the most open and welcoming society ever, with no racism, no discrimination, and with the highest of morals as are the teachings of the Quran, and the practice of the Prophet Muhammad (peace be upon him).

Alas, rarely is it so.

For many new Muslims, and newly practicing Muslims, it is a really hard blow when all that expectation, all that they had heard about Islam seems nearly non-existent in reality. So what should be done?

Remember, Islam is Perfect, Muslims Are Not

It seems a very clichéd phrase, but it really is true!

Allah gave us Islam, and He has made it perfect, because He is as-Salam, completely Perfect in all His Attributes. However, with regards to the creation of human beings, Allah says the following: 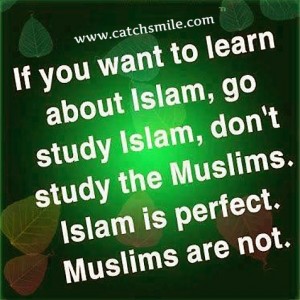 In fact, Allah does not even ask us to be perfect. He just asks us to give our best efforts, and to leave the rest to Allah. So the next time you see a brother or a sister really messing up, do not let Satan mess up with your head.

The practice of that brother or that sister has nothing to do with whether Islam is right for you or not. They are no ideals. The ideal is the Prophet Muhammad (peace be upon him) and everyone else is struggling to get there.

Never let the practice of a Muslim deter you from Islam.

But some people are intentionally harsh, rude or hypocritical!

Yes that is true! There are some people who are intentionally rude.

It is important to remember that there are hypocrites in every community. They even existed during the time of the Prophet, despite the stern warning given in the Quran to those who seek to profit from religion, or to cause division among the believers.

Today is no different.

More so, for most Muslims there has not been a proper upbringing on Islamic morals or values. They have been raised in households where Islamic ethics was never part of the upbringing. And as such, for many a Muslim, simply not eating pork can be thought of as allegiance to the religion.

That is sad, but true. Part of converting to Islam is understanding that all that happens in our lives is part of the test to see how we do as human beings.

Allah tests His closest slaves with both goodness and hardships. In both cases, the aim should be to turn back to Allah and not to turn away from Him. And, all that we see in life is also a lesson for us in life and religion.

Keep your goal to be the pleasure of God, and disregard the actions of others if it is against Islam and Islamic practice.

Yes, it is hard, but aspire to be of those people whose sole aim is God and His pleasure. Everything else falls in place along with that.

Praying for a fruitful journey for you to Islam, and praying that the journey ends at the gates of Paradise with ultimate bliss.