A light from the next room only illuminated enough to see the shape of the prayer rug under my feet.

My long, flowing hijab swayed with the fan above, allowing the cool air to flow around me.

My heart was full of love for my creator and my sisters who have lined up to pray next to me.

My body melted away and my mind forgot its troubles. There was only my prayer.

It was Ramadan and the time for reward was slipping away quickly. My cohorts and I decided to seize the opportunity. We set up in the mosque to pray through the night in the last ten days of Ramadan.

In the small hours of the morning, we alternately snacked lightly in preparation for the next day’s fast; told stories of former Ramadans; and stood together and prayed for forgiveness, for guidance, for our suffering brothers and sisters around the world, and for goodness in this life and the hereafter.

After a long day of working, fasting for 12+ hours, and cooking for the breaking of fast, standing all night in prayer might have seemed like a burden. But it was the sweetest and most dear time in my life.

My friends and I decided to grasp at the opportunity given to us and compete in good deeds in the most amazing month of the year.

When I first became Muslim, I was encouraged by my closest Muslim friends to take things slowly. Soon after, I started frequenting a local mosque. It was a comforting atmosphere for me as a new Muslim. I got to know several ladies, and they knew I was a graduate student at the university.

When the fall semester started, the kindergarten teacher at the mosque-associated Islamic school left for six weeks’ maternity leave. I was asked to fill in for her and agreed instantly.

It just so happened that the majority of the coverage would take place during my first Ramadan. I’ll admit, I was afraid of Ramadan. I’d never intentionally fasted before. How was I going to attend class, do my job and teach 4- and 5-year-olds the ABCs without even a cup of water?

But that wasn’t all. Up to that point, I was still “taking it slow” with Islam. Pointedly, I didn’t wear hijab. When I went to teach, I would wear a scarf because it was required. But as soon as I’d leave the mosque, the hijab disappeared so nobody would be the wiser at my next stop – university. 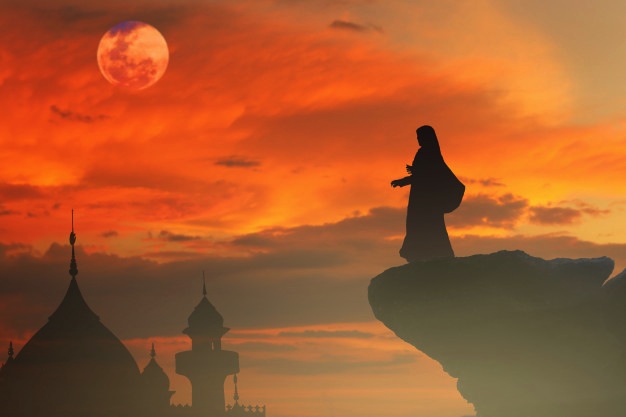 Ramadan started. It turned out to be easier than I thought. However, one thing plagued me. And as Ramadan passed, I felt guiltier. When I’d leave the mosque and remove my hijab, I’d ask myself, “Why don’t you just leave it on?” I couldn’t answer at first; but then one day, I decided to wear it.

As the end of Ramadan approached, I counted the days until I could celebrate Eid-al-Fitr with my friends. Coincidentally, my first Eid as a Muslim also fell on my 24th birthday.

Subhan’Allah! To me, it was a sign from God: I chose the right path. Alhumdulillah rab il alameen!

Ramadan feels a bit like being Cinderella, transformed into a magical state of (inner) beauty and peace, and then I find myself in rags again when the clock strikes midnight (end of Ramadan).

Yusuf Abdul Draws Near to Allah in Ramadan

Ramadan has always been a time to make myself better. But the first Ramadan I really practiced is a standard by which I try to reach every Ramadan. I was young and became very enthusiastic about worship.

The first Ramadan I fasted, I spent my nights in prayer, my evenings with the Muslim community, and my days fasting and working. My hunger and fatigue seemed a small price for the peacefulness and contentment I felt.

In the short time that I slept, I had dreams that would come true in my waking hours. All the normal annoyances of my life started to seem insignificant. I gave what little money I had in charity and somehow my sustenance seemed to find its way to me out of nowhere. I truly felt like Allah was my ally.

I felt like this hadith was coming true in my life:

For most of the year, we concern ourselves with what foods will be the most satisfying to our stomachs.

During Ramadan, as we restrict our stomachs, we should take the opportunity to concern ourselves with what acts of worship will be the most satisfying to our heart and soul.