You should try not to give up too soon on your marriage, especially if you have children with him/her and your marriage is still young
aaa

Don’t get married, have a problem.

Get married, still have a problem.

This is what I was told by an elder when I was single.

And to this day, I think it is true. Although I’d choose being married over being single any day!

What the statement above means is, that marriage is not easy.

Although being single is very hard, especially in Eastern cultures, getting married doesn’t mean that one will always be happy, satisfied and blissful henceforth in life, or that they won’t have to endure difficulties, hardships, and grief at some point.

It only means that the nature of difficulties and problems that they will endure once they are married will be totally different from those that they encountered as singles.

Because being married is a totally different ball game altogether.

The rise in divorce rates all across the world is no secret.

The times we are living in, comprise the age of instant communication, frequent relocation, real-time broadcasting of explosive and provocative information, and holistic globalization.

The past three decades have seen an especially steep and swift rise in all these trends, due mainly to the computer and Internet revolutions, which have impacted the institution of marriage directly as well as indirectly, because they have taken over every aspect of human life and society.

Consequently, it would be true to say that the trials married couples faced even a hundred years ago (or less) were totally different in nature and severity from those that married people face today.

I can still remember marriages during the 80’s, when I was a child. The emphasis was always on clothes and learning how to cook (for the bride), education and job (for the groom), and the preparation of household items.

Marriages lasted more back then. Could it be the modern-day increase in frequency and level of instant communication with others that has given the foundation of the institution of marriage a blow? 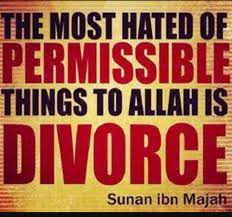 The question is, is it even possible/correct to link some modern-day factors that affect our social lives, as some of the reasons for the rise in divorce?

Or is it just that people really were more patient decades ago, which is why their marriages lasted longer?

Giving Up too Soon

One of the things that I have personally noticed and experienced among married couples today, keeping in mind that I receive many emails and other messages related to marriage problems from young people, is their tendency to give up on their spouse, or their marital relationship, too soon in the marriage.

The factors quoted for their despondency about their marriage, and their consequent inclination to consider getting a divorce, often are:

– not feeling sexually attracted to their spouse, not feeling any love for them any more, not being adequately loved in return, not getting or being able to give as much sexual relations from/to their spouse as they want,

– not spending enough time with their spouse due to the nature of their work/career,

– not getting along with in-laws or having enough living space to feel comfortable;

– being consistently mistreated by their spouse (also known in the modern context as “verbal/emotional abuse”);

– not being able to pursue a career/have a job and feeling stifled as a result,

– and not having a friendly relationship with their spouse i.e. one in which both get along well mentally and enjoy meaningful, engaging conversations, i.e. connect with each other at the same intellectual wavelength.

Not having children i.e. fertility issues, or being coerced to have children too soon (against their will) are also factors that sometimes encourage a married person to consider divorce nowadays.

Some of these reasons for contemplating divorce might be valid in some people’s dictionary, depending on their personal/familial circumstances, nature, habits, character traits, and personalities, but in my opinion, most of these issues are automatically resolved with the passage of time.

In addition, the practice of patience, putting one’s trust in Allah for imminent relief, and undertaking proactive efforts for solving their problems, by one or both spouses – based upon sincere intentions to improve their relationship – also solve most of these problems over time.

What is Causing Divorce Nowadays?

At this point, I’d like to point out how damaging it is on a couple’s marital relationship to have others’ opinions and thoughts about it expressed in front of them without need or necessity.

In other words, if a married man or woman shares too many details about their marital relationship with their family or friends too frequently, especially about their fights and disagreements in the first years of marriage, and hears the latter comment negatively about it often enough, it can cause immense damage to an otherwise happy marriage.

For example, how often a married couple talks or texts each other on their cell phones throughout the day; how much the wife serves her husband by preparing his food etc. How often they go out on dinner dates; when they are planning to have a baby; how much time/money a husband spends with/on his wife, as compared to his other family members and friends. All of these things vary from couple to couple, and there is no right or wrong, per se.

What works for one couple might be totally wrong for another, depending on their personal tastes, natures, likes and dislikes. Intimate details of a couple’s relationship like the above-quoted examples are actually nobody else’s business and should never be shared with others, not even a parent, sibling, or best friend. Furthermore, negative comments about these trivial details should not be entertained by the couple, much less given heed to.

Yet, nowadays, it is not uncommon for both married women and men to broadcast such intimate information to others via social media, often accompanied by selfies, location tags, and hashtags. 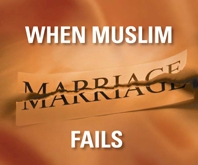 Pictures of the couple together on exotic vacations, at dinner dates in restaurants, or shopping for household items at expensive stores etc. are naively broadcasted online to others, not suspecting that even a sincere well-wisher among their close circle who is viewing that information could be, as a natural human consequence, turning green with envy as a result.

The existence and detrimental effects of ain (the eye), hasad (envy), and sihr (witchcraft) on marriages are also very true and real, manifesting themselves in various uncanny and unfathomable ways, especially on the marriages of righteous, religiously practicing Muslims.

Many marriage problems have no apparent, traceable causes when they stem from these satanic causes, but they do wreak absolute havoc on the peace, tranquility and love in an otherwise happy marital home.

In such circumstances, the mistreated, oppressed, and/or neglected spouse should practice patience, return bad behavior with good, cover their spouse’s faults and misdeeds from others (the way a garment covers the blemishes on a body), and put their complete trust in Allah for eventual relief and reconciliation.

At the same time, discreetly seeking the counsel and help of professionals, such as qualified psychologists, therapists, and marriage counselors (preferably those who are righteous Muslims) and doctors/healers such as psychiatrists and those righteous Muslims whose ruqyah is beneficial, embody effective and beneficial practical steps that should be taken by couples to solve their marital problems at home.

If living together becomes very hard, then before hastily seeking a divorce out of desperation, they should temporarily separate from each other to let things cool down a little, then undertake the Divinely endorsed method of arbitration with the help of their righteous relatives, to resolve matters.

Once again, when doing this, they should be very careful not to ‘air their laundry in public’, viz. not let anyone among their social circles, who is known to gossip, slander, spread rumors, and backbite, to get to know about their marital problems.

And, of course, Facebook/Twitter/Whatsapp updates about their marriage problems, even between close friends, are a big no-no!