I woke up from a dream.

One of those dreams that fills you with emotion; that feels so real you desperately cling to it as it’s swept away by consciousness.

In my dream, I was in Al-Masjid Al-Haram, in one of the upper levels.

It was bright, filled with light. The sunlight painted glittering arches on the ornate carpets, as it streamed in through the windows.

I could see the Ka’bah, and I heard the quiet murmur of the people circling around it venerating the Creator of the heavens and the Earth. The environment was filled with palpable tranquility.

The most important and notable part of this dream occurred when a smooth voice echoed throughout the structure reciting the iqamah, marking the beginning of the prayers. There was someone there with me. As I glanced to my side, a woman who had been sitting nearby stood up for the prayer. She joined me at my side, her soft shoulder touching mine.

It was my mother.

She was there. My mom. In Makkah. In Al-Masjid Al-Haram. Praying beside me.

A Wish of Guidance

I’m not even sure what to call this intense emotion that rises up from my heart, that causes my face to heat up and tears to fill my eyes, blurring my vision.

I know a woman whose husband converted to Islam. Eventually his only brother also decided to accept Islam. His mother agreed as well and the two of them said their testimonies of faith after the Eid Salah a few years ago.

Later that day, the father also decided to enter Islam, and now the entire family, who were previously Jewish, are Muslim. When I think of this family I am so happy for all of them, but at the same time I feel a pang of sadness and longing which leads me to increase my pleading with Allah over my own family.

I wish. I hope. And I pray for my dream to come true. For my mom, and my dad.

But if I were to tell them this, about my aspirations for them, they may not find it endearing or sweet. They might struggle to understand why I would wish Islam on them when they are perfectly happy as they are.

This is a common dichotomy experienced by many people who choose to accept Islam, leaving behind their family tradition. Those before us experienced it as well. Recorded in Sahih Muslim, Abu Hurairah relates a touching story to us:

‘I used to call my mother to Islam and she would refuse. I called her today and she mentioned something about you that I detested. Please invoke the blessings and guidance of Allah on her.’

Then the Prophet, said:

So I left full of hope because of the Prophet’s supplication for my mother. When I reached home I found that the door was partially closed. My mother heard my footsteps and said:

‘Stay still Abu-Hurairah,’ then I heard the water running; he added, “my mother performed body ablution, put on her clothes and hurriedly opened the door without her head-cover and said:

“None has the right to be worshiped but Allah and Muhammad (peace and blessings be upon him) is the Messenger of Allah”.

I went back to the Prophet, crying of joy and told him: I am bringing you good news; Allah answered your prayers and guided the mother of Abu-Hurairah!”

A Feeling of Selflessness

In this account, we see that Abu Hurairah tried speaking to his mother, inviting her to Islam. He did so out of his love for her. And he became overwhelmed when she, his beloved mother, insulted his beloved prophet of Allah, Muhammad. He was so hurt and torn and possibly felt on the verge of despairing of his mother.

Perhaps he worried she would be forever resistant and apathetic towards taking Islam as her own way of life. He brought his worries to Prophet Muhammad, his eyes full of tears. And we see that upon her acceptance of Islam, again his eyes were filled with tears, this time, tears of joy and relief.

What causes these strong emotions regarding our parents?

Why are we not happy, even if they are happy worshiping other than God? Why can’t we just let them be? 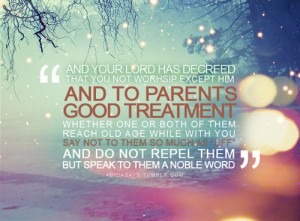 If they disbelieve, it doesn’t take anything away from our hereafter. We will not be blamed if they refuse to worship only the Creator of the Heavens and the Earth. We will not be asked about what they did.

What many parents do not realize is that our desire for them to be Muslim does not come from selfishness. For most of us, it may be the most selfless desire that ever burned within us, and the most compassionate of all our feelings for our parents.

No matter what our upbringing was like, we still have a deep connection to our parents. Even adopted children often feel a strong desire to find their real parents and feel incomplete never knowing them.

A friend of mine, who was adopted as a baby from Korea, traveled to her country of birth, in search of her family history. She was optimistic that she would in fact discover and meet her parents, or find answers that would help her feel satisfied. At the age of 35 she still maintains hope, planning now on producing a video appeal, anticipating that someone, somewhere will be able to help her find them.

It is that connection that causes us to want the best for our parents. To see them at peace with their Maker in this world, and their faces shining with joy in the next life.

As much as all of us may hope and dream for our parents to be admitted to the ultimate mercy of the Most Merciful, the Quran provides sobering knowledge of the fact that all of us may not be so fortunate.

The Case of Prophet Abraham

We see that Abraham, in spite of his wholehearted attempts to explain to his father that there is nothing worthy of worship except the one God, his father vehemently refused until his death. And we see others who had hope for their family members, Noah, for his son, Lot for his wife, yet those people all opted instead to deny and reject faith in their Lord.

We must always realize that no matter what we do, it may be that our family members may not accept Islam, yet simultaneously we must hang on to hope and continue to pray for their guidance.

Just as Abu Hurairah had nearly lost hope, he sought prayers for his mother and she had a change of heart immediately. There are many people who finally enter Islam in their old age, sometimes less than a year before their death! So we must not lose hope.

And in the meantime we should each resolve to strive to be the best we can in manners and kindness towards our parents, regardless of what they believe or how they choose to treat us, as Allah said in the Quran:

Be grateful to Me and to your parents; to Me is the [final] destination. But if they endeavor to make you associate with Me that of which you have no knowledge, do not obey them (in that), but accompany them in [this] world with kindness and follow the way of those who turn back to Me [in repentance]. Then to Me will be your return, and I will inform you about what you used to do. (Quran 31:14-5)