When an important collective decision is taken by an individual or a small number of people without consulting those involved, there will definitely be missing information, which can result in an incomplete assessment of the advantages and disadvantages of each option.
aaa

Why do most Muslims find difficulty in reaching consensus and in agreeing on collective matters in their family and public decisions?

Why do most Muslim organizations fail to work together as one team, and are not able to coordinate with one another to avoid duplicating work and wasting resources to achieve results that are in the best public interest?

Why do most Muslim countries run on the political level without real shura (mutual consultation) or democracy?

This series of articles argues that these are the symptoms of a fundamental problem: lack of a real culture of shura among Muslims in these different spheres where collective decisions should be made and implemented. The series also proposes solutions to this crucial problem, which obstructs sustainable development of Muslim countries and communities in the 21st century.

Shura is an important tool in Islam for participation in a dialogue process to reach a mature collective vision which leads to reaching and implementing an optimal collective decision. It is a bridging activity which bridges faith and reason. It links the one with the many. It unites differences, and as such, it has the potential to be a wonderful system for governance.

The Qur’anic concept of shura is widely misunderstood and underestimated and, even worse, misapplied or ignored by many Muslim collectivities. Almighty Allah has commanded shura not merely as a thing to do, but as a way of life for all forms of Muslim groups, organizations, and societies. Whenever there are more than one Muslim involved in any decision-making process, be it within a family, a committee, a company, an entire local community, or an entire country or political arrangement, there is the domain of shura.

Some people believe that shura is restricted to collective political decisions, but this is not the case. In fact, shura is a wider process when it is compared to democracy, as it covers mutual consultations in all walks of life, including family, community, and social fields. It is a consultation process that also applies to the area of fiqh (Islamic jurisprudence) and could be applied in new research in the field of natural sciences. Shura in Islam is first a human principle and then a social foundation and a foundation for a sound political system. 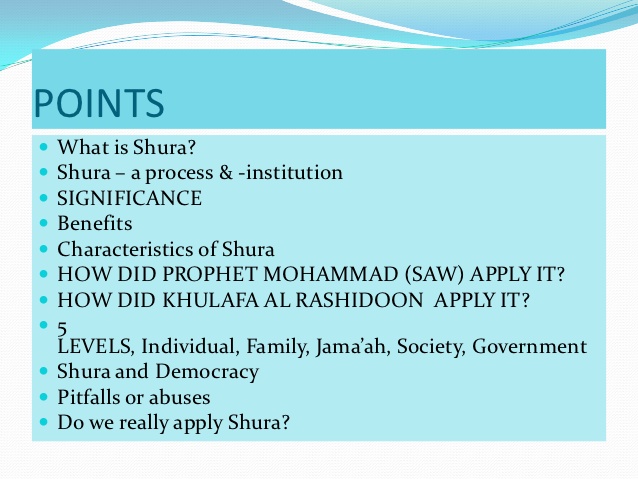 The study of shura as a general theory starts from the basics of human rights, human freedoms, and rights of the nation. In Islamic law, the concept of human rights is not restricted to individual freedoms, which include the freedom of opinion and freedom of ownership and managing one’s wealth; it goes beyond that to the right of participating in the collective decisions of society and to share the wealth of the Ummah.

Prophet Muhammad (peace and blessings be upon him) encouraged his Companions to consult others in personal and public matters. In his personal matters, he set an example in performing the Istikharah Prayer (supplication for guidance in making a decision) when choosing from more than one option, after having taken the advice of his Companions and family.

In taking collective decisions, he also set the example of consulting those involved in the matter to be decided. That is the difference between optional shura (istisharah) and collective, binding shura.

One such case was before the Battle of Uhud when the Prophet sided with the majority opinion to go to battle against the enemy outside of Madinah, though his initial opinion, which was also the opinion of his closest Companions, was to stay in Madinah. He went against his own personal preference to teach Muslims to respect collective shura decisions.

A successful shura process enables people to look at the matter to be decided from different angles and identify the threats and opportunities in each alternative, thereby in the end reaching an informed, wise decision on the best option to implement.

When an important collective decision is taken by an individual or a small number of people without consulting those involved, there will definitely be missing information, which can result in an incomplete assessment of the advantages and disadvantages of each option.

Furthermore, excluding those who should be involved in the process leads to them being alienated from the group, and when the implementation starts they often oppose the decision because they have not been consulted or convinced, which could lead to the failure of the whole process.

Therefore, the elements of a successful shura process are as follows:

1. Participation of members of the community, or their representatives, with their opinions in all decisions that relate to their public matters to protect the unity and best interest of the community.

2. Freedom of opinion of all individuals within the community and their right to freely discuss all opinions before selecting the decision to be implemented, which all members should abide by as a decision of the community (or the Ummah).

3. Enabling the group and its members to compare the different views in an objective way to choose the best option. In Islam, the criterion of selecting the best option is the extent to which it reflects the principles of Islam, its guidance, and the foundations of Shari`ah, and at the same time achieves a benefit that is in the best interest of the community. Selecting the best alternative is to take place after free dialogue and debate.

4. A decision becomes a binding decision for the community if it has full consensus or at least a simple majority.

If these are the main pillars of a successful shura process, and if most Muslim groups, communities, and nations are unable to implement them, with a few exceptions, then the logical conclusion is that there is a need for shura training, and there is ample room for training and development in this field. Three main plans are suggested for such training:

• Long-term shura training starting from the family and school levels

• Short-term shura training for priority groups, like current members of parliament, local councils and shura councils, who are involved in public decision-making in Muslim countries. The aim is to achieve immediate improvement and results that would be reflected for a wider number of Muslim and non-Muslim citizens within a short duration of time.