I believe that if you choose with a clear understanding of moderation, that you can find a combination from available burkini styles that balances religious practices and modesty.
aaa

My life as a practicing Muslim began in 2002 after 41-years of not knowing a single Muslim or having ever heard anything at all about Islam.

The journey began after I became acquainted through work with a Somali taxi driver in Washington, D.C.

For those who were either raised Muslim or later in life became Muslim (or decided to practice Islam), like me, it might not be difficult to imagine that the transition did not come without its share of challenges.

In addition to facing family, friends and co-workers, came the challenge of embracing modesty in the way a Muslim woman is encouraged to dress publicly.

{O Prophet! Tell your wives and your daughters and the women of the believers to draw their cloaks all over their bodies. That will be better, that they should be known so as not to be annoyed. And Allah is Ever Oft Forgiving, Most Merciful.} (33:59)

I was never an exhibitionist in my choice of clothing to start with, so making adjustments in that area wasn’t as complicated, however, the issue of choosing to wear hijab was another thing altogether since one of the things I had always been admired for was my hair. However, combining modesty and hijab when electing to swim was another issue altogether.

Recognizing the Wonders of Our Creator

It seems I was destined from childhood to live near water. The family home I grew up in was on lakefront property. Throughout many a summer my siblings and neighborhood friends spent carefree afternoons swimming. Later, I spent a period soothed to sleep at night by the sound of waves crashing against the Atlantic Ocean shoreline of Myrtle Beach, South Carolina. Then I traveled to Egypt where I’ve lived near the Mediterranean Sea via Alexandria and the Red Sea in Hurghada.

The memories surrounding these magnificent bodies of water have remained as part of the fabric of my life; ironically, however, I can count on one hand the number of times I have gone swimming since becoming Muslim 11-years ago.

Recently though, the wonder of Allah subhanahu wa ta’ala’s creation in the tranquil Red Sea and its shorelines beckoned, so I granted myself a holiday during Eid Al-Adha by taking a week in a rented seaside flat, on a mission to go swimming. 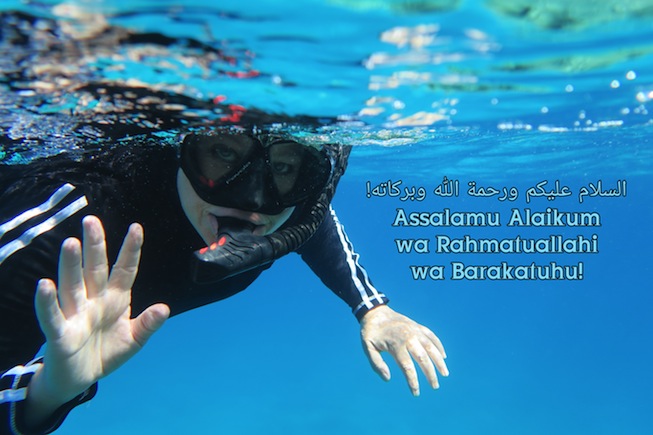 There are numerous references in the teachings of Islam that recommend swimming. We read that Prophet Muhammad learned how to swim in Madinah during his childhood; he encouraged the Companions who migrated to Abyssinia during the Makkan Period; he stated that he was pleased with those who knew how to swim. Umar emphasized the importance of swimming by saying:

“Teach your children how to swim.”

It is further reported by Tabarani on good authority that:

“Any action without the remembrance of Allah is either a diversion or heedlessness excepting four acts: walking from target to target (during archery practice), training a horse, playing with one’s family, and learning to swim.”

“Teach your children swimming and archery, and tell them to jump on the horse’s back.”

Subhan’Allah, how blessed I felt after embracing Islam to have been raised having learned both horseback riding and swimming!

A believer in the teachings of Islam recognizes the wonder of the human body and is grateful to the Creator. This gratitude encourages us to give a priority to maintaining optimum health; a sunnah of the best of creation.

Islam’s holistic approach to health covers all aspects of the mind, body and soul. A truly health conscious person blends diet, nutrition and exercise with the remembrance of Allah and an intention to fulfill all their religious obligations.

A fantastic way to maintain our health is none other than swimming! As a form of exercise and sport, swimming works every bone and muscle in the human body without the harsh impacts of other exercise activities, in addition to increasing brain activity, promoting weight control, and a healthier heart; all of which prolong life.

And a prolonged life affords us the greater opportunity of striving to serve our Creator as best we can.

Quandary: What to Wear! 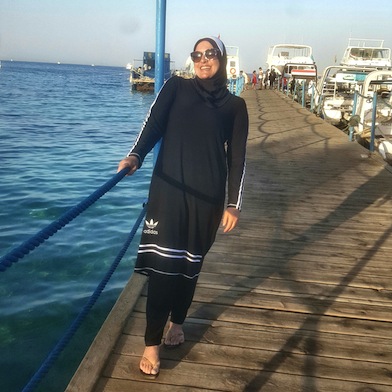 I swam in the Red Sea one time in the six years I have lived in the area. At that particular time I was living in a flat that had a private beach. I remember going down wearing one of my prayer abayas. It was a nice experience, however, as any avid swimmer could understand, not exactly the same wearing yards of flowing fabric saturated with water weighing you down!

On my self-imposed holiday and second swimming adventure I wanted to try something different.

The “burkini“, originally created in 2003 and designed by Lebanese Australian Aheda Zanetti for her company, Ahiida, is a swimming suit covering the whole body except the face, the hands and the feet (enough to preserve Muslim modesty), whilst being light enough to enable swimming.

The burkini (appearing as a full-length wetsuit with built-in hood, but somewhat looser and made of swimsuit material instead of neoprene), has been described as the perfect solution for conservative Muslim women who want to swim but are uncomfortable with revealing bathing suits.

I was intrigued enough about this option for swimming and spent some time online browsing various websites selling the burkini in a variety of styles. It was pleasantly surprising to find that some retailers were carrying the burkini in a variety of sizes to accommodate anyone interested in making a purchase. Before I knew it, I was downtown in quest of any local shops carrying them. The mission took three hours, but the very next day, I giddily found myself beach-bound!

The experience of swimming once again was exhilarating, even if it did leave me the next day with long-forgotten aching muscles. Feeling the freedom of being able to move my legs freely without getting tangled up in excess fabric was fantastic. I tested myself to see if I remembered different swimming styles. Once a swimmer, always a swimmer!

It was an incredible afternoon, but one of the things I found so encouraging wearing my new burkini at the beach that day, was finding numerous other burkini wearers, too.

Naysayers will be ready to decry aspects regarding the level of the burkini’s modesty, but we must be mindful always of the fact that Islam also teaches moderation in everything. Dr. Jamal Badawi explains:

“Islam teaches its followers to practice moderation in order to create a sense of balance and equilibrium in the life of the individual. This balances control and deprivation so that there is control without deprivation.  A person has joy without excess, grace without pride and humility without humiliation. Moderation is an overall attitude of balance which is one of the basic characteristics of Islamic teachings.”

I believe that if you choose with a clear understanding of moderation, that you can find a combination from available burkini styles that balances religious practices and modesty, thus allowing women to participate freely in swimming for sport or exercise.

Modesty not Exclusive to Muslim Women

Muslim women, particularly reverts, are perpetually in search of finding a balance between their former lives and the life they choose after becoming Muslim; not only for themselves, but for maintaining harmony in their personal and professional everyday lives; the burkini’s modest coverage helps bridge that balance.

It is of interest to note, however, that the burkini doesn’t necessarily have to be something sought out exclusively by Muslim women; a point my sister-in-law brought to light when commenting on a Facebook posted photo of me wearing my burkini at the beach. She wrote, “I’m not Muslim, but I want one!”

Reading her comment sent me immediately back in time to my teen years; when I would wear a t-shirt over my swim suit because I was shy.

And let’s be honest, sadly, many of us can also recall silently asking ourselves poolside or at the beach, “How does he/she wear that outside?!”

Clearly people choose to wear things for swimming that they perhaps shouldn’t wear or are instinctively uncomfortable wearing for whatever reason, but what do mainstream retailers offer to customers other than tiny pieces of stitched together fabric sold for exorbitant prices? Why not get a little more fabric for your money and feel comfortable at the same time?

The burkini not only enhances the lifestyle of active Muslim women; it provides a viable and fashionable option for modest women the world over.

Muslims are taught to wish for others what they wish for themselves. My wish for those reading this: peace of heart, mind, body and soul. Happy swimming!