We have passed now the half few points of Ramadan and we’re coming up to the last ten days, these crucial last ten days…

We want these last 10 days to be something that comes for us in the Hereafter; something that makes us big difference to our destiny and to our story.

Make the Most of Every Opportunity

Positivity means so many things we’ve been trying to touch on in previous episodes. One of those meanings is to make the most of every opportunity that comes to you; so this Ramadan is that opportunity, so let’s not let it passes by.

A second meaning is to continue moving upwards. Positivity, going towards the positive, going towards a higher directory of life, even if in reality there is always the picks and drops, you’ll always have ups and downs…

We’re always trying to move upwards and we want to leave Ramadan in a better state than how we entered it.

Well remembering that not every month is going to be like Ramadan, it is special for a reason.

A third meaning of positivity is to take account of yourself, to check how I’ve been performing; how have my actions are matching up with my resolutions…

Account yourself before you are accounted on the Day of Judgment.

But, at the same time, don’t let the Satan be your accountant, don’t let him do audit for you and drive you into depression and despair because the fourth meaning of positivity is always to carry that hope, that expectation in Allah’s reward as the hadith tells us:

Whoever fasts Ramadan with faith and also seeking Allah’s reward, then all his or her previous sins will be forgiven.

So it’s very important to have that hope and expectation in Allah’s reward.

Almighty God knows you and He knows His creation. He says in Surah Al-Mulk:

Does the one who created not know? While He is the Subtle Acquainted, The Aware.

So Allah (God) who has made this life a trade and transaction and He knows that, as human beings, we like to bargain; so this month has been made as a special sale, a special bargain season, when we can reap the rewards with less efforts than we would have to apply throughout the year.

And Allah has made this life a race and a competition. Yes, slow and steady when is the race, we should indeed pace in ourselves throughout this Ramadan only doing whatever we can actually manage; and yet we are now coming to the finish line, we’re coming to that stage where we have sprinting so that we can cross the line in the best possible form.

The wife of Prophet Muhammad (peace be upon him), Aisha, described his acts in the ten days she says that: 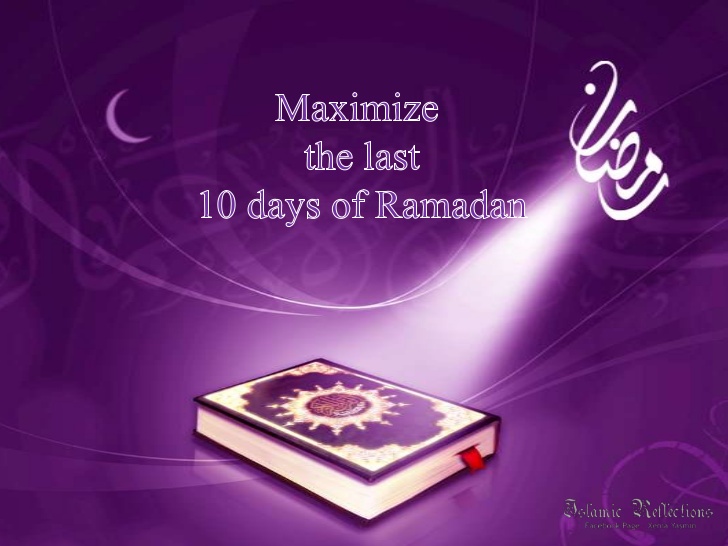 So these last ten days of Ramadan are extremely important and just as Allah has made this life a trade and transaction, just He has made it a race and competition, also He’s made it a test and examination.

Any of us who does exams, we know that those people who study throughout the year and there are the ones who hope they get the highest rewards because they prepare themselves and they understand the material, but there are those of us also who wait to the last moment, who’d try to cram at the last possible second.

And the same thing can apply to worship and seeking Allah’s rewards.

Maybe we’re among those people who are trying to cram at the last moment with Ramadan itself or in the last days of Ramadan but Allah in His mercy, will not cause any of us to fail for that reason.

Seeking the Night of Power

After all, in the last ten days, we have a very special night, which is called Laylatul Qadr (the Night of Power or the Night of Decree) as Allah Almighty says:

The Night of Power is better than a thousand months.

So this is our chance to reap those rewards and there are a lot of videos and information and articles out there about seeking Laylatul Qadr when it is. So make the most of that and most importantly spread your worship out throughout these last ten days and nights seeking Allah’s reward, having full faith in Him.

Inshallah we’ll see you in the next episode which is talking about the blessed day of Eid.