Strength to control your anger won’t happen without effort. Just like a top athlete persevere to reach high levels skill and endurance, we must strive and train ourselves to achieve self-control.
aaa

“Islam is not a religion, It is a theocracy and terrorist cult that hides behind the mask of religion in order to achieve its mission of world domination.” – Jan Morgan

You know the feeling you get when you hear hateful accusations against Islam that you know are false?

On one hand, you know that your beloved Prophet Muhammad said:

On the other hand, you can’t help but feel frustrated. You want to stand up for, your faith. A little voice in your head incites you to “fight fire with fire” reasoning that “an eye for an eye” is only fair. You might even become so incensed that you feel like lashing out and condemning the person to the most extreme end.

These days, there’s no shortage of anti-Islam vitriol. A recent visitor to my Facebook page described Islam as, “A vile, hateful, and supremacist religion that is vacuous at best.” He argued that terrorist groups do in fact represent Islam, asking, “Why is ISIS not Islamic again? If anything, they are restoring Islam to what it has always been.”

He spared no opportunity to defile the Prophet, in one instance saying, “I’m not obliged to follow someone like him who did nothing when his followers murdered, thieved, enslaved, and raped.”

When faced with hate speech, false allegations and outright lies against our beloved way of life, what should we do? The most even-tempered Muslim can be overwhelmed by the abundance of hateful comments maligning Islam, on any given day.

The virtues of controlling our anger are plenty. Many are merely common sense: Anger can lead to a slew of negative consequences, and more often than not: regret.

The reason the statements against Islam make us angry is because of our faith right? But, guess what? The prophet said:

Obviously unbridled anger will not serve to increase our faith or help us attain the pleasure of our Lord.

Thankfully, we’ve been given plenty of tools to deal with these problems and to keep our anger under control even in the most trying circumstances. The trick is to use them correctly. Here are some of the methods provided in Islam to help you control your anger.

It’s easy to sit at home and imagine smiling calmly at the angry man cursing at you in the coffee shop, but remaining calm in the heat of the moment is difficult.

“The strong man is not the wrestler, but the one who controls himself when angry.”

From this we learn that real strength is controlling one’s behavior when overcome with anger.

The fact that the Prophet used the analogy of an athlete (the wrestler) may indicate that achieving excellent anger management takes training. Like an athlete, we must hone our anger-controlling muscles. The potential athlete must work hard, and persevere. You’ll feel broken at times, but you will eventually be able to lift more, run further. Likewise, to be truly strong anger-control athletes, we have to work for it.

Athletes constantly drill and practice in order to achieve top performance. To sharpen your skills, try practicing how to respond to hate by role-playing with family members or friends. Of course, your training would not be complete without plenty of reading and study of the Quran and the life of the Prophet Muhammad. Pay special attention to the way he dealt with hostile people and the high status afforded to those who control anger in the Quran.

Think about it: Who would really enjoy watching you completely lose it in a fit of irrational vengeance? You know who!

I’m sure you’ve heard that seeking refuge with Allah from Satan is enough to quell even the most boiling rage. No doubt, mustering the wherewithal to utter “I seek refuge with Allah from Satan, the rejected.” when you really need to, is tough – that’s part of the training. Still, if you manage to say the words, you might find that your anger isn’t going anywhere. That’s because they are not “magic words” but both an action and a request. The action is consciously turning to Allah emotionally and psychologically.

In a Hadith Qudsi He said:

“O My servants, you will not attain harming Me so as to harm Me … O My servants, were the first of you and the last of you … to be as wicked as the most wicked heart of any one of you, that would not decrease My kingdom in anything.” (Muslim)

Even if the whole world were to gather together to defile Islam, malign the Prophet Muhammad or insult our Maker, none of that would have any effect on Allah or His perfect words. Therefore we need not react in haste as if we are protecting Allah or His deen – rather, we are the ones who need protecting! 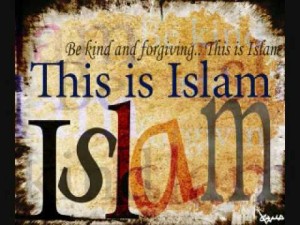 Our du’a must be a sincere and mindful appeal for His protection from Satan and his attempts to entice us into lowly exchanges of fury.

Take the Bitter and Make Something Sweet!

{And the servants of the Most Merciful are those who walk upon the earth modestly, and when the ignorant address them [harshly], they say [words of] peace} (Quran 25:63)

Responding simply and peacefully to hateful people automatically sets you apart and highlights the ugliness of their comments. The result is sweetness. You will feel good for having risen above the nastiness and most likely your example will provide optimism for anyone who witnesses such an exchange.

Allah has told us that simply by returning evil with good, we can transform relationships from malevolent to camaraderie:

{Repel (Evil) with what is better: Then will he between you and him was hatred become as it were, your friend and intimate!} (Quran 41:34)

What could be sweeter than that?

Step Away From the Keyboard!

“If any of you becomes angry, let him keep silent.” (Ahmad)

Anger can take us by surprise. You could be innocently scrolling through your social media feeds and happen to come across a slew of nasty – and worst of all – untrue comments about Islam. Your first instinct may be to set the record straight. But when you are feeling angry, responding is not the best choice.

Wait until you’ve cooled down and thought it over. More often than not, you’ll find that there is no benefit in replying. Remaining silent gives you the peace of mind that you haven’t done anything wrong and can prevent a lot of stress.

Allah Likes Gentleness in All Affairs

Aisha narrated that some people used to say to the Prophet: “As-Samu ‘Alaika (i.e., death be upon you), She understood that they were cursing him while making their speech unclear. So, Aisha said to them:

The Prophet said to her:

“Be gentle and calm, O ‘Aisha, as Allah likes gentleness in all affairs.”

You Can Do It

Strength to control your anger won’t happen without effort. Just like a top athlete persevere to reach high levels skill and endurance, we must strive and train ourselves to achieve self-control.

Allah has complete power over all things, and no one can harm Him or decrease His dominion. Our anger does not benefit Allah, but only harms our own selves.

Sometimes you may succeed in overcoming feelings of anger, and at other times you may fall prey to your emotions. If you mess up, ask Allah for help and resolve to do better next time.